140th Assembly of the Inter-Parliamentary Union 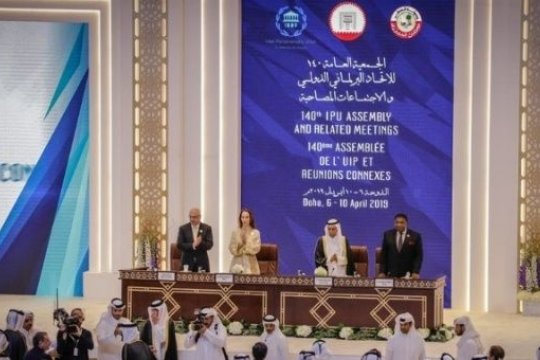 The Inter-Parliamentary Union (IPU) – the oldest (est. 1889) and one of the most authoritative and influential global parliamentary organizations. The IPU has permanent observer status at the United Nations Organization.

The Assembly is the supreme body of the IPU and is convened twice each year.

The 140th anniversary Assembly of the IPU will discuss hot-button issues of global politics, and will probably decide to hold a Global Conference on interfaith and interethnic dialogue.

The key subject: parliaments as platforms for promoting education for the benefit of peace, security and the rule of law.

This time round, meetings are scheduled to be held between all IPU bodies.

The Russian delegation may propose a discussion of the current situation in Venezuela, V. Volodin said.

The agenda of the IPU Assembly includes a general debate on the meeting’s central issue, as well as on 3-4 major issues upon which resolutions are made.

Gabriela Cuevas Barron (Mexico), the first woman to head the IPU (elected to the post in 2017).

In recognition of the IPU’s extensive peacekeeping effort, eight of its Presidents have at various times become Nobel Peace Prizewinners.

The Structure of the Inter-Parliamentary Union

Inter-parliamentary Assembly – the supreme organ of the IPU. Convened twice a year.

Runs the IPU between Assembles. The Council is composed of three representatives from each national parliamentary group. The Council Chairman elected for a period of four years.

A permanent body under the direction of the Secretary General.