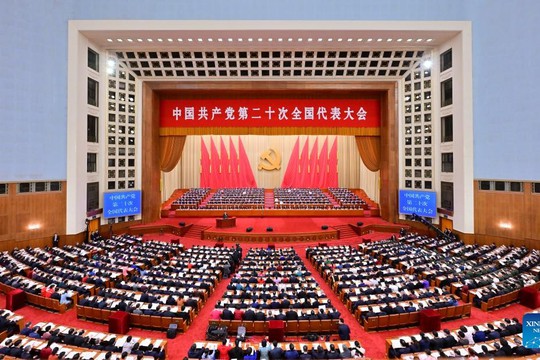 Xi Jinping delivered a report to the 20th National Congress of the Communist Party of China on Sunday. Below are highlights from the report, primarily on international topics presented by “China Daily”.

- The five years since the 19th National Congress of the CPC have been truly momentous and extraordinary. The Party Central Committee has pursued a strategy of national rejuvenation amid global changes of a magnitude not seen in a century, with major strategic plans made for advancing the cause of the Party and the country.

- The CPC aims to basically realize socialist modernization by 2035, and build China into a great modern socialist country that is prosperous, strong, democratic, culturally advanced, harmonious, and beautiful from 2035 through the middle of this century.

- National security is the bedrock of national rejuvenation, and social stability is a prerequisite for building a strong and prosperous China. Achieving the goals for the centenary of the People's Liberation Army in 2027 and more quickly elevating the people's armed forces to world-class standards are strategic tasks for building a modern socialist country in all respects.

- The CPC will intensify troop training and enhance combat preparedness across the board, strengthen all-around military governance, and consolidate and enhance integrated national strategies and strategic capabilities.

- The policy of "one country, two systems" is a great innovation of socialism with Chinese characteristics. It has proven to be the best institutional arrangement for ensuring sustained prosperity and stability in Hong Kong and Macao after their return to the motherland.

- The CPC will implement its overall policy for resolving the Taiwan question in the new era, and unswervingly advance the cause of national reunification.

- China has always been committed to its foreign policy goals of upholding world peace and promoting common development.

- China remains firm in pursuing an independent foreign policy of peace. It has always decided its position and policy on issues based on their own merits, and it has strived to uphold the basic norms governing international relations and safeguard international fairness and justice.

- China stands firmly against all forms of hegemonism and power politics, the Cold War mentality, interference in other countries' internal affairs, and double standards.