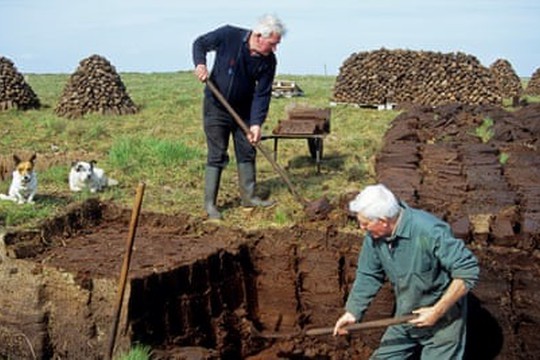 This was supposed to be the year Ireland got serious about protecting its bogs but some of those hopes are wafting up in smoke as households burn peat to save on energy bills,- writes “The Guardian”.

The soaring cost of oil and gas has reinvigorated the ancient practice of cutting and burning turf, a fuel that hurts the environment but can save a family thousands of euros, especially as temperatures drop to freezing.

Earlier this year the government introduced curbs to peat cutting to protect Ireland’s bogs – which are important carbon sinks and sources of biodiversity – but Europe’s energy crisis has boosted what is supposed to be an anachronism. It costs approximately €500 to heat a household with peat for a year versus several thousand euros for more climate-friendly sources of energy.

In Ireland, anecdotal evidence suggests there has been a sizeable increase in the use of so-called turbary rights which allow people to cut peat, said Ó Brolcháin, a former mayor of Galway city. “In many cases turbary rights had lapsed but people are using them again all of a sudden. There is plenty of evidence of people selling peat door to door. It’s quite understandable, given the economics.”

People in rural areas traditionally cut peat sods in spring and burn them in winter. Ireland’s rural inhabitants survived for centuries by draining bogs and using peat as fuel. A semi-state company, Bord na Móna, cut turf on an industrial scale. Storytelling by a blazing hearth embodied the national identity.

Attitudes began to change in the 1990s. Burning smoky fuels was banned in Dublin and in 2018, Bord na Móna announced the phasing out of its commercial turf cutting. The government banned the sale of turf, smoky coal, and wet wood in shops or online in October.

But fearing a rural backlash, it allowed families living near remaining bogs to continue cutting turf for domestic use.

John Dore, a spokesperson for the Kildare Turf Cutters Association, said he felt sorry for households facing big energy bills. “I wouldn’t like to be a tight-budgeted person paying for oil and gas. It won’t make any difference to me because I’ve got the turf.”