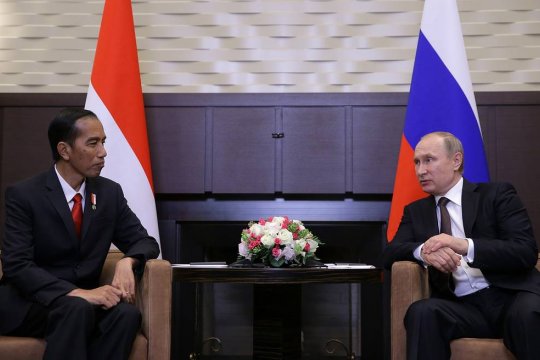 “Jauh di mata, dekat di hati [Out of sight, close to the heart].” This is how Lyudmila Georgievna Vorobieva, Russian ambassador to Indonesia, characterized the relationship between the two countries.

In fact, in the 70 years of the relationship, it has gone through different states of proximity. It was pretty “hot” even before and around independence in 1945 when being leftist was identical with an anti-imperialist stance — and certainly during Sukarno’s presidency (1945 to 1967).

Then, abruptly, with the annihilation of the Indonesian Communist Party (PKI) in 1965 after a now-largely discounted “coup” by the PKI, the relationship suffered a long cold period of over 30 years during Soeharto’s New Order (1967 to 1998). Keeping the communist scare alive was, after all, one of the ways the regime maintained its grip on society.

Then-Soviet leader Mikhail Gorbachev’s perestroika (restructuring) and glasnost (openness) in the 1980s, the collapse of the Soviet Union in December 1991 and Indonesia’s Reformasi in 1998 paved the way for the restoration of warm, harmonious relations.

Mohammad Wahid Supriyadi, Indonesian ambassador to Russia since 2016, said we are now in the second golden age of Russia-Indonesia relations (the first being during Sukarno’s presidency). Wow! Who would have guessed?

For the lay person, these days Russia invariably draws our attention indirectly, e.g. for its alleged interference in presidential elections in the United States or for being the country where Edward Snowden, the National Security Agency whistleblower, has been living in exile for over six years.

I confess Russia hasn’t been that prominent on my screen lately either, until I heard about the Russia-Indonesia 70-year friendship exhibition at the National Gallery from Feb. 3 to 17 (see: “Snapshots: Indonesia, Russia exhibit 70 years of friendship”, The Jakarta Post, Feb. 5). I was keen to go because of my own “Russian connections”.

Yup! I was a sociology student in London (1976 to 1979), and took a course on Russia and China. The focus of my studies was Western industrial societies, so I wanted to know the other side of the Cold War (circa 1947 to 1991). It was also essential for writing my thesis on the People’s Cultural Institute (Lekra), the PKI’s cultural wing. Both Lekra and the PKI looked to these communist countries for guidance, especially the Soviet Union, to emulate their concept of “socialist realism” — art and literature that glorified communist values and supported the party line.

I was also connected to Russia by marriage. My late husband, Ami Priyono, was among the first seven Indonesian students sent to Moscow in 1956. Together with Sjumanjaya, they studied film at Lomonosov Moscow State University. Both eventually became prominent film directors in the 1970s and 1980s.

Ami’s father, Prijono, was culture minister in Sukarno’s first cabinet, serving for nine years (1957 to 1966). Prijono was a leading figure in the Murba Party (sometimes referred to as the second Indonesian communist party) and, like Sukarno, was pro-Soviet. In 1954, Prijono was awarded the Stalin Peace Prize.

So, the reason for my interest was partly a nostalgia trip and partly a desire to know more about our current relationship with the “Land of the Red Bear”, as Indonesians sometimes refer to Russia.

I was accompanied by Vladimir Anisimov, head of the artist collective Bureau of Creative Expeditions and curator of the Necklace of the Equator exhibition. A distinguished gentleman in his 70s, sporting a bushy silver-gray beard, a moustache and an artist’s ponytail, he was like a relic of the past, adding to the nostalgic atmosphere.

Vladimir explained in detail some of the 85 paintings on display. They were done by 10 Russian painters who over 20 years had travelled to Indonesia on various occasions, capturing scenes from Java, Sumatra, Madura, Bali, Lombok, Kalimantan and Sulawesi: landscapes, houses, ceremonies, local traditions — mainly focusing on the people. Mostly impressionistic, lots of bright colors and a touch of romanticism here and there, like the Madonna painting of a woman carrying a baby surrounded by flowers and a rainbow. No socialist realism here!

Exhibitions by Russian artists have been held before in Indonesia, in 2000, 2003 and 2005. Vladimir recalled that the opening day was usually full but after that, empty. The situation is completely different now, he said, with 200 to 300 people attending during work days and double that on the weekend.

Vladimir said they received only positive feedback. “People were impressed and spent a lot of time taking selfies with the paintings as backdrops. Maybe more time than just looking at them,” Vladimir smiled wryly.

Among the crowd were a young man and woman intently discussing something related to the exhibition. They were Indonesians but spoke in very fluent English. I approached them and asked them why they had come to the exhibition. “Oh, we are Marxists. We came because we wanted to know more.”

Wow, Marxists in our midst? So young and so brazenly declaring their ideological beliefs at a time when Indonesia’s communist phobia is still alive and well? They really piqued my curiosity, so I took their phone numbers and chatted with them by WhatsApp the following day.

Both were 25 and were members of a group of young Marxist-Leninists who, like them, were disillusioned with the state of the world. “In 2016, when Donald Trump was elected president, it was the moment where we started really realizing the evil of the US empire and imperialism,” they said.

“One of the things that really moved me,” the young woman said, “was reading DN Aidit’s [PKI chairman] speech for the [party’s] 44th anniversary, when he said that one of the conditions of being a PKI member is ‘unmeasurable love for the people’.” For her, that’s what communism is: loving each other so fiercely that we fight for a world where no one has to suffer, a world free from exploitation.

Wow, talk about youthful idealism! Truth be told, any ideology, any political or economic system, as well as any religion, can be twisted to harm and oppress the people, however much our leaders wax lyrical about them, or about bilateral and international relations.

Maybe this is a time when our leaders should start listening to the younger generation to save the world. Greta Thunberg is trying hard to do that. Many more are joining her ranks, so all you politicians, bureaucrats and leaders out there, start listening!

Early version of the text published under: “Russia – Indonesia 70 years on: Some like it hot, cold or warm” in Jakarta Post

Jakarta-born Julia Suryakusuma is an author of the cult edition ‘Julia’s Jihad’. Tireless fighter for social cause, she is one of the most influential opinion-makers, thinkers and columnists in southeast Asia.