70th anniversary of the conference which outlawed war 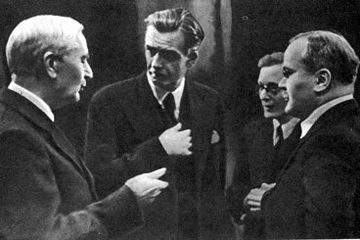 The 70th anniversary of the Moscow Conference of Foreign Ministers of the USSR, the USA and the UK took place in a mansion house at 17 Spiridonovka Street, which in 1943 saw the adoption of a document which later became the prototype for the UN Charter. In his address at the celebration of the anniversary, Russian Foreign Minister Sergei Lavrov described the first conference of the representatives of the Allied Powers of the anti-Hitler coalition as unique in its value. “The complete defeat of the aggressors was still far away, but the participants in the Moscow conference were united in their understanding of the need for a strong and durable foundation for a new world order that would ensure the freedom and independence of peoples, and the of outlawing war as a means of settling international disputes."

Giving a deep analytic assessment of the memorable Moscow conference, Lavrov underlined that in the final stage of the meeting an important document was adopted: the Declaration on General Security, which was signed by representatives of the four great powers of the anti-Hitler coalition: the USSR, the USA, England and China. The first thing the Declaration proclaimed was their joint agreement for the unconditional surrender of the fascist states as a precondition for ending the war. The Moscow conference set the stage for the first meeting of the heads of governments of the three powers, which was held in Tehran from November 28th to December 1st, 1943. In his address on this memorable evening, Sergei Lavrov highlighted the relevance of the historical example that suggests to the current heads of state and government that they have a measure of responsibility for world peace.

"Today the world is going through a very difficult period of transition, coupled with large-scale global challenges,” said Sergei Lavrov. “An adequate response to them can only be by a collective effort of the entire international community. I believe that in order to realize this truth, we should not wait until the situation becomes similar to the events of 70 years ago. The Russian- American cooperation in connection with the Syrian crisis shows that it is a difficult, but doable task", said Sergei Lavrov, making historical parallels with the current political situation in the world.

In the same context, the minister also spoke about the principle of non-interference in the affairs of sovereign states, recalling that in letters exchanged in 1933, U.S. President Theodore Roosevelt and the People's Commissar for Foreign Affairs Maxim Litvinov, who was the ambassador of the Soviet Union to the United States, this undisputed principle is confirmed. "Let us not forget them today, or those who promote unilateral steps,” said Sergei Lavrov. “Attempts to impose socio-economic models lead to instability," underlined the Minister. "We have all the opportunities at our disposal to rise to the level of historical responsibility that the participants felt at the Moscow conference, and to meet the requirements of the XXIst century for effective mechanisms of global governance," said Sergei Lavrov.

According to the head of the Foreign Ministry of the Russian Federation, the Moscow conference in 1943 was the impetus for the hard work of the allied powers over the architecture of a new world order. Its key principles were enshrined in the 1945 UN Charter. "These principles were formulated so wisely and with such foresight, that the Charter of the World Organization fully remains to the present day the foundation of modern international law. It provides the necessary framework to harmonize the approaches of the leading centers of power and influence in the context of the formation of a polycentric world order in the interest of resolving the most pressing global and regional problems. This allows the UN to perform a central role in international relations," said Sergei Lavrov.

The evening event was attended by a veteran of the Moscow conference, Sergei Leonidovich Tikhvinski. 70 years ago he was a young employee of the Far Eastern Department of the People's Commissariat and was preparing for a trip to China as Second Secretary of the Embassy, but suddenly he was called by Molotov’s assistant, Boris Podtserob. At the conference, Sergei Leonidovich Tikhvinski performed protocol function. He met guests at the door and escorted them to the rooms reserved for them. As Sergei Tikhvinski recalled at the evening event, the first to arrive at the conference was U.S. Secretary of State Cordell Hull, a tall old man of more than 70 odd years of age, tired from the long hours of flight to Moscow. Prime Minister Anthony Eden was a contrast to his U.S. counterpart; a young, handsome, elegantly dressed 40 year-old man. Rubbing his cold hands together, he went into the lobby, admiring the roses that adorned the hall. Next, the ministers were asked to select a cultural program, to which Cordell Hull firmly refused: "No entertainment! Anthony Eden prefers Russian ballet at the Bolshoi.”

Sergei Leonidovich spoke about how from time to time during the conference he came face to face with Maxim Maximovich Litvinov, who during breaks in between the meetings, went up to the second floor, lay down on the sofa and fell asleep, and he was woken when the breaks ended. On the last day of the conference Sergei Tikhvinski greeted the Chinese ambassador in Moscow. This meeting lasted for 8-10 minutes. Going into the white hall where the main document was signed – the Declaration on global security - the high-ranking diplomat greeted the participants and afterwards signed the Declaration in silence and immediately left. That was the protocol, according to S. Tikhvinski, as tensions in relations with Japan, dictated only the brief participation of China. But, nevertheless, in all the world’s newspapers, China was described as "one of the four powers of the democratic camp". On this memorable evening at the mansion house, Foreign Minister Sergei Tikhvinski said that in this very room 70 years ago, emergency preparations were made for the conference. A round table was ordered for which a white table cloth was specially purchased, and so everything looked perfect for the start of the historic Moscow Conference.

The academic Anatoly Torkunov, Chairman of the UN Association of Russia, and Rector of Moscow’s State Institute of International Relations, began his speech with a compliment to the priceless memories of his teacher, Sergei Tikhvinski, thanks to whom all those present felt a "taste of the events of those days - the amazing pressure and the fantastic result that was achieved during that historic conference." Anatoly Torkunov stressed that all three countries contributed to the success of the conference, but, as the Western Allies recognized as allies of the USSR, the most important role was played by the Soviet delegation. It adopted a flexible attitude which the Westerners found unusual, and high professionalism in their approach to their partners. "The ideas and principles reflected in the Moscow Declaration, proved their viability,” said Anatoly Torkunov. “In fact, the solutions adopted in Moscow built a bridge from the declaration of a noble idea to its implementation in practice. In it you can see the outlines of the future UN, the core of which was a council of the four powers, acting unanimously," said Anatoly Torkunov.

The historical background of the gala evening at the Reception House of the Foreign Ministry in 17 Spiridonovka Street was an exposition from the museum of the Ministry of Foreign Affairs of Russia. In addition to the black and white photos of the day, there was an original of the Declaration on the issue of global security. The authors of this document 70 years ago, affixed their signatures in support of a just world order, which theoretically eliminated war on a global scale.