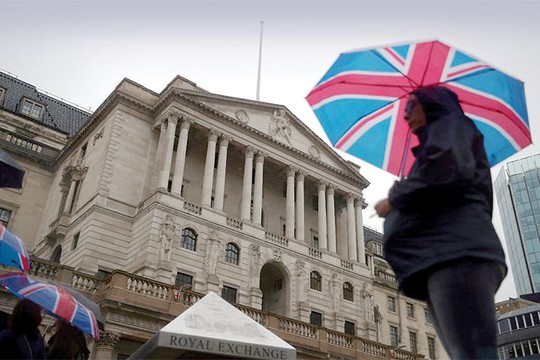 The Bank Of England

“Just this week, we got confirmation that our financial system is, again, on the brink of collapse, when the Bank of England (BOE) was forced to enact, de facto, a bailout of the pension funds of the United Kingdom,” writes Tuomas Malinen, a CEO and chief economist at GnS Economics, a Helsinki-based macroeconomic consultancy, and an associate professor of economics.

On Sept. 28, around noon, the Bank of England stepped (back) into the gilt markets and started buying government bonds with longer maturities to stop the collapse in their value, which could have caused the financial system to become unhinged. Without the BOE intervention, mass insolvencies of pension funds—and thus most likely other financial institutions — could have commenced that afternoon.

It’s obvious that if one of the major financial hubs of the world, the City of London, would face a financial panic, it would spread to the rest of the world in an instant.

It’s now clear that an outright financial collapse threatens all Western economies, because if pension funds, often considered very dull investors because of their risk-averse investing profile, face a threat to their insolvency, it can happen to any other financial institution.

I consider that the banking sector will be the next in line, emphasizes Tuomas Malinen. Banking is a business of trust. If the trust in a bank or in the unlimited support of authorities for the bank disappears, a bank run commences.

Going forward, the biggest risk of a systemic bank run most likely lies in Europe. European companies and households have been and continue to be decimated by ravaging inflation, fast-rising interest rates, and spiking energy prices. They are being hit on all sides, and this will, most likely, cause many of them to fail financially.

A characteristic feature of a banking crisis is that many banks, possibly all, will close their doors to customers and issue withdrawal limits. The main point is (was) that during banking crises, you won’t have full access to your deposits in the bank. As a result, electronic payment methods such as bank cards may become useless. In an extreme case, your deposits could be used to recapitalize ailing banks in a process called “bail-in.”

We warned already in March 2017 that the global financial system, which broke during the 2008 financial crisis, has never really been healed. We noted that it and the global economy were kept standing merely by continuous central bank and government interventions and nearly unlimited provisions of credit.

On Sept. 28, we got a final confirmation from the BOE that this truly is the case.

Tuomas Malinen is convinced: “We are in deep, deep trouble.”