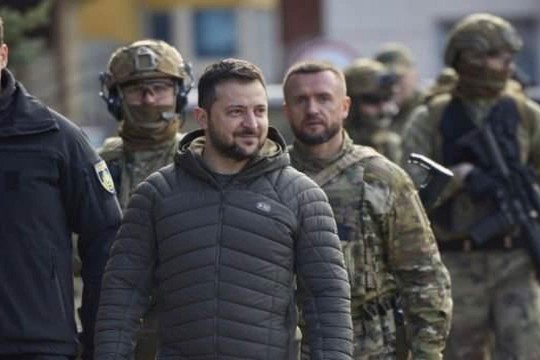 President Vladimir Zelensky. He is smiling …

A “barbarous killing of Russian prisoners of war” is just the latest in a series of war crimes committed by Armed Forces of Ukraine (AFU), Russia’s Defense Ministry said.

The statement came after videos that surfaced online purportedly showed executed Russian servicemen after they have surrendered.

“This is a widespread practice of the Ukrainian Armed Forces that is actively supported by the Kiev regime and outright ignored by its Western backers,” the ministry stressed.

It also blasted the actions of the Ukrainian soldiers as a “deliberate and methodical murder.” “No one will be able to portray it as a ‘tragic exception’ amid the Kiev regime’s alleged total compliance with the norms regulating the rights of POWs,” the statement noted.

Such actions prove the “barbaric nature” of the government in Kiev led by president Vladimir Zelensky, as well as “all those, who defend and support it,” the statement added.

This is not the first such high-profile incident that was committed by Kiev.

Moscow also announced that it would send the information on the alleged execution of Russian captives to the UN Human Rights Office, the Council of Europe, as well as Amnesty International, and the International Committee of the Red Cross.