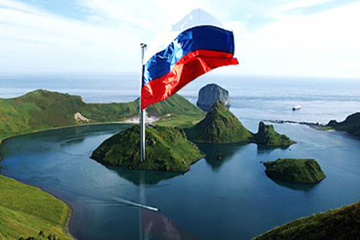 The fact that, unlike Boris Yeltsin, the current Russian leadership is not intended to sell the Kuril islands, has prompted sharp reaction from official Tokyo, thus increasing tensions in the Far East.

On the 8th of February the Russian Embassy in Tokyo received an envelope with a bullet inside. There was a note attached which said “the northern territories are our land”. The sender of the letter, which was posted in Kanagawa prefecture, was unknown. This is not the first signal from ultra-right factions. In December last year they sent to the Russian Embassy a bottle of liquid which, as they described, was “poisonous substance”.

Japan is the only place on our planet where the problem of “northern territories” exists. Neither the UN, nor any other country agrees that Tokyo's territorial claims to the islands are grounded. To meet their demands would at least mean to revise the outcome of WW II.

Traditionally, on February 7 rallies took place in Tokyo in remembrance of Treaty of Commerce, Navigation and Delimitation signed between Japan and Russia in 1855. Every year on this day Japanese ultra-right groups stage a rally near the Russian Embassy in Tokyo. But this time they overstepped all limits when desecrated the Russian flag. However, Japanese Prime Minister Naoto Kan promised to continue seeking the return of Iturup, Kunashir, Habomai and Shikotan.The dispute between Tokyo and Russia over the islands got even worse when Naoto Kan described President Dmitry Medvedev`s trip in November to the Kurils as "an unforgivable outrage", without stopping for a second to think that it was his statement that would better fit into this description.

As it was expected, Moscow responded by saying that the Kurils are Russian territory, and President may go there anytime he likes.

Sixty-five years since the end of WW II, Russia and Japan have not yet signed a peace treaty. Evidently, both countries can go on like this, but what is the reason for it?

Actually, Russia and Japan signed many delimitation treaties, which defined the two countries` sovereignty over the coasts of the Sea of Okhotsk and the Sea of Japan. But the Soviet victory over fascism in Europe put everything into place. During the Yalta Conference of 1945 the leaders of the Soviet Union, the US and Great Britain signed an agreement which stipulated the Soviet Union`s     participation in a war against Japan on the side of allies, which, by the way, betrayed Russia in 1905. It was also agreed that the Soviet Union would have the southern part of Sakhalin Islands and all nearby isles back; join other countries in operating the port of Dairen, with Port Arthur remaining a naval base under rental to Moscow. Apart from this, the Soviet Union agreed to use the Chinese Eastern Railway and the South Manchuria Railway together with China; while the Kuril Islands were annexed to the Soviet Union.

Participation of Soviets in the war against Japan was important to the US amid its intention to invade Japanese islands. The US military command wanted Russians to oust Japanese troops from the territories seized by Americans. So, brigades of Baikal and Far Eastern fronts launched an offensive against Japan`s Kwantung army in Manchuria, broke down the Japanese army`s defense and by August 20 entered Manchuria. On August 11 the Soviet Union launched an offensive  in South Sakhalin to land airborne troops on southern chain of the Kurils. The offensive began after Joseph Stalin, who relied on the agreement clinched at the Yalta Conference, pressured US President Truman to amend a draft project of General Order No. 1, thus including all islands of the Kuril chain into an area defended by Japanese army that was expected to surrender to the Soviet Chief Army Commander in the Far East. From August 19 to September 7 all Japanese were ousted from the islands of southern Kuril chain, with about 20,000 Japanese officers and men taken captive.

It appeared then that everything was put into place. But Great Britain and the US had other plans.

The US envoy at the San Francisco Peace Conference, dedicated to reconciliation with Japan, John Foster Dulles did the following: instead of inviting all sides interested in signing a peace treaty with Japan for discussions, he personally visited each country participating in the conference, lobbying a draft agreement composed jointly by Washington and London. Thus Dulles gained support of 'allies' ready to sign the deal.

The San Francisco agreement deprived Japan of its sovereignty over Sakhalin and the Kurils, yet without naming whom they should belong. Thus the UK and the US violated the Soviet Union's sovereignty over the aforementioned  territories. The US-British draft deal just deprived Japan of any right to control these territories, without naming Russia's historical sovereignty over them. The draft made on the sidelines of the San Francisco conference suggested things which opposed commitments made by US and British leaders in Yalta, when hardly anybody doubted Russia's crucial role in defeating fascism.

A draft peace deal with Japan presented in San Francisco by Soviet Foreign Minister Andrei Gromyko was not even discussed and put to the vote. Naturally, the Soviets did not sign the US-British variant of the peace agreement with Japan after that. And there were other reasons for that except the Kurils. Moscow criticized other points of the treaty, like ignoring the existence of the People`s Republic of China, the continuing US military presence in Japan, as well as badly planned measures aimed to prevent the rebirth of Japanese militarism.

Why did Dulles turn a blind eye on agreements reached shortly after not only Soviet soldiers but also people of his native country had sacrificed their lives during the war? The answer is simple: just within several hours after the signing ceremony at the San Francisco Conference, Japan and the US signed the Treaty of Mutual Cooperation and Security, in which the US was granted the use by its land, air and naval forces of facilities and areas in Japan. This treaty marked the birth of “unsinkable US aircraft carrier” in the Soviet Far East.

While the text of the treaty had been discussed in San Francisco, the US Senate approved a resolution which reads: “The resolution in question does not recognize Russia`s sovereignty over territories belonged to Japan as of the 7th of December, 1941...as well as Russia's privileges over Japan as stated during the Yalta Conference”.

Having embraced yesterday's enemy, the US betrayed its ally in the deadliest war in history.

But this is not the lack of a peace treaty between Moscow and Tokyo that disturbs Japanese revenge seekers. The latter are being guided by those international forces that turned non-nuclear and demilitarized Japan into a deterrent on Russian Far Eastern borders. The war is going on. And though methods have changed, Russia is being surrounded from all sides- from Kaliningrad to Sakhalin. Turning Russia's friends into enemies remains key strategic aim of the US and NATO in Eurasia. And the recent escalation of tensions between Tokyo and Moscow proves this well.

While Russian diplomats are being too politically correct to adequately answer insults, the whole world is watching the ongoing exchange of remarks, wondering how patient Moscow can be about the issue.

The Japanese may think that everything can go on sale in Russia. But the main problem is that the bullet addressing the Russian Embassy in Tokyo was fired not from a Japanese gun. And we must be fully aware of it to be able to successfully protect our interests.