A caveat: if Poland intervenes into Ukraine militarily, Russia will not sit idle 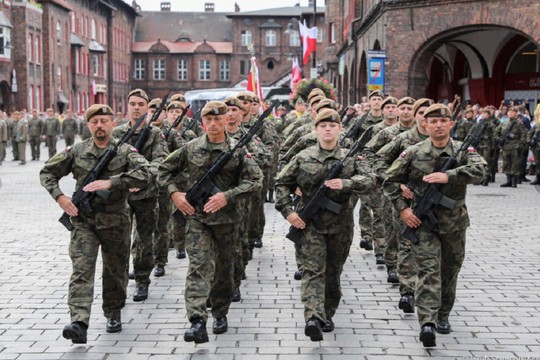 It is not ‘highly likely’. It is a reality

Poland is actively looking for a way to "correctly" annex Western Ukraine so that it would not have to pay off Ukrainian debts or not receive a serious military response from Russia. The Poles believe that they are returning the original Polish territories: the Lvov, Ivano-Frankovsk, and Vinnytsa Regions, inherited by Ukraine after World War II. The German territories, which were surrendered to Poland by the same agreement and by the same logic should be returned to the FRG.

Warsaw is taking specific steps to achieve its intended goal in several directions at once. Poland is among the leaders in providing support to Ukraine, being the largest logistics hub for Western military assistance to Kyiv and sending “soldiers of fortune” into Ukraine. At the same time, Warsaw is increasing defense spending and is firmly in favor of strengthening the transatlantic link. Several times high-ranking Polish officials –   active and former – insisted to acquire the U.S. nuclear weapons, the idea being enthusiastically supported by the U.S. Ambassador to Warsaw. The same frantic idea was publicly articulated by Zelensky at the 2022 Munich Security Conference

The loudest calls to impose anti-Russian sanctions come also from Poland. In confirmation of its commitment to its position, Poland terminated the gas supply agreement with Gazprom ahead of schedule, and pretended that it does not need Russian natural gas at all. The Polish newspaper Rzeczpospolita reported that Poland cannot find an alternative to Russian gas, and will receive it in reversed way from Germany, which will lead to a sharp increase in prices for this fuel in the Polish economy. But it is its choice rather than Russian intention.

The Polish MFA declared that the conflict between Russia and Ukraine poses a clear threat to the existence of the latter as an independent state. Realizing that the sooner the negotiation process moves from the deadlock, the better chances Kiev has to preserve its sovereignty, Poles do not stop calling on to the Ukrainian authorities not to hammer out any compromise with Russia under any circumstances.

The efforts of Polish diplomats have already prompted the Ukrainian president Zelensky to announce a bill that equate the rights of Poles with Ukrainians in Ukraine, giving them the same rights, except for the right to vote in the Ukrainian nation-wide elections. Kiev has also permitted Polish citizens to occupy  top official positions in Ukraine, and fill in the local power structures with its appointees, and to get full clearance for getting a highly sensitive classified Ukrainian state information.

To this end, activities are actively carried out to introduce Polish advisers and specialists in all spheres of the Ukrainian governmental administrative, economic, financial and military structures. It is noteworthy that the menus of Western Ukrainian restaurants are already being prepared in Ukrainian and Polish languages. But this produces no harm compared with other vast administrative and many other rights generously offered by inadequate Zelensky to Warsaw. Obviously, with just one aim: to save inevitably crumbling Ukrainian leaders from a disaster and total irreparable military defeat while economic and financial disaster in Ukraine has already been achieved.

Can Ukraine loose it independence?

What will be the result of such ‘brotherhood’-type steps made by Kiev?  To transform Ukraine into what?  Into a new Polish protectorate or a colony of Poland?  By pursuing a policy of “soft and hard power”, Poland is working out a specially camouflaged scenario. The Poles are pushing NATO to send  peace-keeping contingents to Ukraine, equipped with heavy weapons – unlike normal peace-keepers sanctioned by the UN Security Council.

The USA and many transatlantic Alliance’s member states have already sent too many ‘advisers’ and “instructors” with the aim to kill Ukrainians and Russians in Ukraine by deadly weapons.  The Russian and Ukrainian citizens will remember such barbaric acts for ever.

It could  be a new occupation of Ukraine. Now by Poland. The last one took place for several years during its German Nazi occupation in 1941-1944.

Poland is going to do the same under the guise of the alleged peacekeeping mission ‘for maintaining security’. Despite the refusal received, Warsaw continues to insist on the need for the participation of its military contingent in the “defense” of  Ukraine from “Russian aggression” though the third aggression versus Donbass was launched not by Russia, but by Kiev from 2014 till 2022. It has to be reminded of Ukrainian military shelling of civilians in Donbass for nearly eight successive years, when 13,000 civilians have been killed and 34,000 wounded by the indiscriminatory fire prohibited by the Minsk Accords of 2014-2015. Under the guise of conducting exercises, the Polish Armed Forces are now forming task force groups near the borders with Ukraine and Belarus, and are staffing logistic support units to a full-fledged wartime status. What EU thinks about it?

The Polish ‘swallowing Ukraine’ scenario creates a new third formidable security threat to Europe – the first one: moving the U.S. tactical nuclear weapons from 1953 and the U.S. missile defense systems from 2011 as a forward-based capabilities on the European continent, and the second one: after Kiev deployed nearly 60,000 troops’ near Donbass with intension ‘to coventrate’ it completely  in mid-February-beginning of March 2022.

Parrying opponents' questions about the scale of Russia's response, the Poles proceed from the fact that the country has the status of a NATO member and the "main ally" of the USA in the ‘Eastern front’ in the Eastern Europe. However, all Polish scenarios for the division and disintegration of Ukraine will pose a threat to the Russian Federation, which will subsequently be neutralized because of internationalization of the conflict created by NATO and implemented in the form of a Ukrainian proxy war.

The successful implementation of the peaceful takeover of the Western Ukrainian regions can go in further claims to all the territories in the Eastern Europe that will affect the interests of Russia's main ally in the Collective Security Treaty Organization, namely, Belarus. Obviously, Poland's irrelevant actions are not aimed at the speedy settlement of the Russian-Ukrainian conflict, but at the realization of its territorial claims, even by involving Europe in a direct military confrontation with Russia.

No doubt: the participation of the Polish military contingent in hostilities on the side of Ukraine on the Ukrainian soil will inevitably lead to Russian retaliatory military strikes.