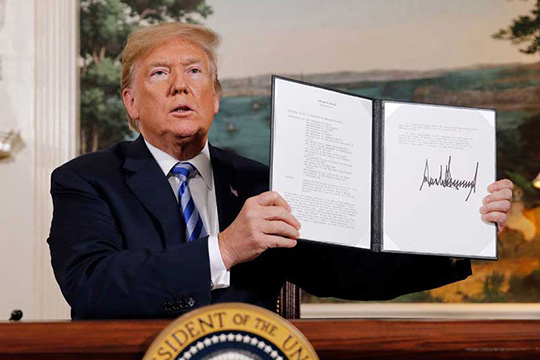 Less than two months are left for the transition of government in the United States of America. Not a long period, but sufficient to trigger processes that the next American administration would not be able to reverse. There are no reasons to doubt that President Trump, who still refuses to concede the election defeat, will try to make the future of the Biden Administration as difficult as possible. In this context, let us remember that President Trump hails the abandonment of the nuclear treaty with Iran as his highest achievement, so it would be reasonable to assume that he would do almost anything in his power to make this very step irreversible. The question of whether that includes the option of a military attack on Iran, therefore, hangs in the air.

We are witnessing a current concentration of American air power in Iran's neighbourhood. This particularly refers to strategic B52 bombers and F16s from American bases in Europe. Further arrival of F35s in the region would inscrease the likelihood of an attack on Iranian nuclear facilities. This likelihood might also be increased with the announced arrival of the aircraft carrier Nimitz into the Gulf waters. As news agencies reported, the military option of that type had already been seriously considered by President Trump and his advisors, although it did not enjoy a high degree of support among the highest US military officers. In the forthcoming period, as long as Trump sits in the White House, it is realistic to expect that this dispute between the military and the Administration will gain in intensity, given the fact that President Trump's team is well-known for its stubborn sticking to its original agenda.

In this context, it must be noted that the nuclear treaty with Iran was declared as one of President Obama's greatest foreign policy successes. The Joint Comprehensive Plan of Action (JCPOA) is a detailed agreement with five annexes reached by Iran and the P5+1 (China, France, Russia, the United Kingdom, the United States, and Germany). The nuclear deal was endorsed by UN Security Council Resolution 2231, and Iran’s compliance with the nuclear-related provisions of the JCPOA was verified by the International Atomic Energy Agency (IAEA). It was a groundbreaking agreement that satisfied security concerns of Americans, Iranians, Arabs, Europeans, as well as others, opening the gates for Iran's readmission onto the global scene. By adopting this treaty, Iran left its position of a pariah state. By betraying the treaty, President Trump has transformed the favourite role of the US as a leader of the free world into that of a pariah state. Does that imply his willingness to go even further in his rejection of all norms of international law, by launching a military action against Iran's nuclear infrastructure, as a logical continuation of his unlawful withdrawal from the ratified international treaty?

From President Trump's perspective, such an action should prevent a quick and easy return of the US to the treaty in the post-Trump period. A war in the Gulf should lead to an instant rise of oil prices; consequently, it should also lead to the strengthening of the US dollar, linked to the prices of oil. In the times of the failing global economy, additionally burdened by the crippling effects of the pandemic, this would be the most favourable impetus to the withering economy of the US. The rise of oil prices would also have a negative effect on the manufacturing-oriented economies of American competitors in China and Europe. This rise would also strengthen the military industrial interests in the US, commonly backing the Republican Party, potentially at the expense of the financial ones, which traditionally stand behind the Democratic Party.

A thorough, or even only partial, destruction of the Iranian nuclear programme would certainly be the most favourable outcome for hardliners on both sides, and President Trump probably sees it as a chance to either remain in power despite the election results, or to undermine the position of the future Administration. No doubt, that would trigger a robust return of Iranian hardliners to power in the forthcoming elections, which would probably close the door to negotiations with Iran for the President-elect. Most likely, it would give a strong push to the Tehran radicals to renew the nuclear programme, this time exclusively for military purposes. Since an attack itself would probably be launched from the US military bases in the region, it would also trigger an Iranian retaliatory attack on these countries. Such a development would probably strengthen homogeneity among the cornered Arab NATO countries, such as Saudi Arabia, United Arab Emirates, Kuwait, Jordan, Bahrain, and Qatar, pushing them further into Israeli arms. This would also bring the Sunni-Shiite rift beyond the point of repair. Needless to say, most hardliners, not only in the West, would be absolutely delighted with that result.

According to President Trump's orders, the ongoing withdrawal of the American troops from Afghanistan, Iraq, as well as Syria, must be completed 5 days before the transfer of power to the Biden Administration. The withdrawal itself (complete or partial) shall leave an enormous strategic gap, for which there is no alternative to fill the void. Such an exit strategy is without precedent in the American military history, especially given the monumental costs attached to the invading enterprise that took place in these three countries. President Trump's orders, therefore, imply that another gigantic calculus may be at play this time, a calculus of lasting global significance. Let us remember that an absolute departure of all foreign troops from the region was, actually, Iran's demand after the asassination of the commander of the Iranian Republican Guard, Kasseem Suleymani. Does that mean that President Trump has accepted Iranian rules, or even supremacy, in the Gulf? Does it mean that President Trump would abandon American allies in the Middle East, from Israel to Saudi Arabia? And what will happen with oil, hitherto controlled by American companies, which exploited it due to the American military presence? Of course, if President Trump is not abandoning literally all American positions, alliances and interests in the region, it is likely that he must have some other strategic rationale. Perhaps cutting the military expenditures sounds acceptable to the ears of the American public. However, it is not sufficient to justify the magnitude of the shift.

The hasty withdrawal of the US troops, however, serves one clear purpose: it deprives Iran of available American targets for its potential retaliation attempts, and inevitably redirects Iranian wrath at the American allies in the Gulf. Thus the withrawal not only increases the probability of President Trump's military adventure against Iran, but also leaves the Arab allies between Iran and Israel, to choose their strategic sponsor. The question is, whether the recent secretive meeting between the Saudi Prince, Mohammad bin Salman, and the Israeli Prime Minister, Benjamin Netanyahu, is to be interpreted in this context?

In any case, the heaviest weight of the American absence in the region will fall on Israel's shoulders. The Israelis know that an attack on Iran would be an option that could provide Israel with a necessary timeframe to adjust to these new realities and acquire a projected control over their Arab neighbours. A strategic importance of the attack would, therefore, require participation of Israel's military. As the Israelis know it too well, detrimental effects on the Iranian nuclear programme are essential for the very existence of the state of Israel, since the Islamic Republic Iran is finally in the position to capitalise its long-lasting struggle against American dominance in the Middle East and gain strategic control over the entire Levant and the Gulf, so as to be promoted into a global player. The level of communication between President Trump and Prime Minister Netanyahu suggests that certain promises may have been made to the Israelis that an American attack on Iran's nuclear facilities is imminent. However, the assasination of the Iranian main nuclear scientist, Mohsen Fakhrizadeh, attributed to the Israeli intelligence agencies, might be interpreted as an attempt to undermine the Iranian nuclear programme without a full-scale attack, either because the Israelis do not believe in its feasibility, or because they are trying to avoid it, given its long-term consequences that eventually might prove unfavourable for Israel's position.

There might be one more option at play, bearing in mind President Trump's favourite „art of a deal“ strategy: a secret deal between the current US Administration and Iran, that the US leaves the Shiite world (Iraq, Syria, and Lebanon, plus control over Afghanistan in potential partnership with Pakistan) to Iranian domination, in exchange for Iranian tacit permission to have the plutonium generator in Arak – suitable for development of a military nuclear programme – bombed and temporarily destroyed by the US. That option would buy several years to both the US and Israel, with a significant postponement of Iran's eventual production of a nuclear weapon. To the other side, it would give Iran a chance to improve its geopolitical position as one of the two main powers in the region, in interim coexistence with Israel as a de facto leader of the Arab NATO alliance. Under these circumstances, a Shiite bloc led by Tehran, separating Sunni Arab countries from Turkey and Russian influence, might be a favourable development for the US. The questions are, of course, to what extent it would be acceptable to Israel, and to what extent it would draw Iran into overstretching, and effectively, into economic weakening.

Whatever the calculus of the outgoing Trump Administration, the incoming Administration of the President-elect Biden has no interest in allowing that such dangerous developments take place. If President Trump orders an attack on Iran in the last 5 days of his mandate, right after the departure of the American troops from the region, all its negative consequences will be attributed to the Biden Administration, crippling their announced initiatives to stabilise the world affairs. For, its geopolitical consequences could be numerous: a takeover of the Middle East by the strengthened Iranian radicals; a possible nuclearisation of Saudi Arabia, Turkey, and maybe Egypt; a further rapprochement between Iran and Russia, this time in the sphere of strategic nuclear cooperation, which would eventually terminate the Western influence in Eurasia.

By going in that direction, President Trump would promote the strategy of „poisoning the well“ to the future Democratic Administration, depriving it of prospects for relevant foreign policy results in its next 4 years. Eventually, that might lead to the second coming of Trump; and then, to a burial of American democracy and implementation of an authoritarian one-party regime, as desired by the Republican radicals ever since the mid-1970s.