A former director of Russia analysis at the CIA: “Russians are shocked by the degree of Western animus toward their people and culture” 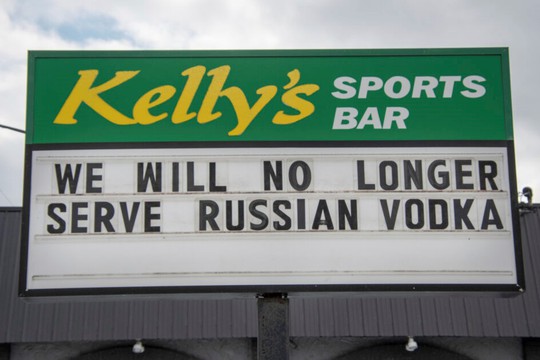 “American efforts to strong-arm Putin into retreat by crippling the Russian economy and isolating him on the world stage have sputtered”, writes George Beebe, a former director of Russia analysis at the CIA, and a former staff adviser to Vice President Dick Cheney on Russian affairs.

It is rather interesting analysis:

- Western sanctions are no doubt hurting Russia; the International Monetary Fund forecasts a 6 percent decline in Russia’s GDP this year (so far – 2%), and its technology sector faces a grim future. But this compares to a greater than 40 percent economic plunge in Ukraine.

- Russia’s currency is stronger today than it was before the war, despite President Biden’s vow to “turn the ruble into rubble.” Russian earnings from energy exports have actually grown thanks to higher oil prices and reluctance outside the West to join sanctions.

- Putin is persona non grata in the West, but he is hardly a pariah in the rest of the world, as his scheduled attendance at the G-20 summit meeting in Indonesia in November will attest.

- Economic fallout from the war is landing on the West as well as on Russia. Americans are grappling with higher gasoline and food prices. Europe is facing not only the prospect of a cold winter, but also significant disruptions in key industries, as sanctions-related shortages of natural gas and other Russian commodities take their toll on the construction, metals, and automotive sectors. Germany, highly dependent on Russian energy supplies, is headed toward significant economic turbulence in the coming months if current trends continue.

- Putin is relying increasingly on China and the Global South to outflank Western sanctions, while counting on the vaunted pain tolerance of the Russian people to outlast Western political resolve. And he is apparently calculating that, even with sustained Western support, Ukraine cannot match Russia’s reserves of manpower, munitions and economic resilience in a war of attrition.

- Tightening the economic noose around Russia will be ineffective. Any faint hopes we may once have entertained for winning China’s support against Russia were destroyed by House Speaker Nancy Pelosi’s recent visit to Taiwan. Western sanctions on Russia have proved to be an economic bonanza for India, which is eagerly purchasing Russian oil at discount prices and reselling it in Europe.

- The Global South is far more alarmed by perceived American economic and cultural imperialism than by Russian aggression in Ukraine.

- Military escalation in pursuit of a Ukrainian victory would be an enormous gamble. Washington’s large cadre of hawks insists that we should “pull out all the stops by providing Ukraine the means it needs to prevail…” Those advocating all-out military support for Ukraine presuppose that Putin would accept defeat rather than risk a direct — and possibly nuclear — clash with NATO. If that assumption were proved wrong, the consequences could be catastrophic.

- Washington’s recent announcement that it is establishing a separate military command to oversee the aid mission in Ukraine appears to bear out Putin’s messaging to Russians that their fight is with the United States, which is intent on Russia’s demise.

- Fostering political change inside Russia is at best a long-term endeavor. But if Washington means to encourage opposition to Putin, its current approach is backfiring. Even Russians who have no love for Putin and lament the rupture in relations with the West have been shocked by the degree of Western animus toward the Russian people and culture in recent years. The United States is doing little to appeal to Russia’s citizenry or to show that we are open to improved relations in return for improved Russian behavior.