A New Redrawing of Balkan Borders: A Road to Hell 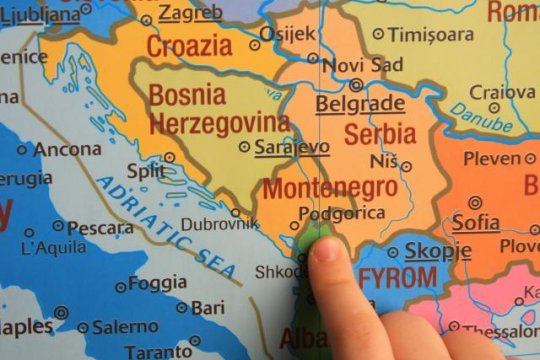 More than a decade after Kosovo region’s unilateral declaration of independence from Serbia, the issue of redrawing borders is back on the agenda. The ongoing negotiations between Belgrade and Pristina on the settlement of bilateral relations under the auspices of the European Union may lead to an unexpected result - the breakaway of Serbia’s three predominantly Albanian-populated southern Serbian regions of the Presevo Valley and their accession to Kosovo - which, in turn, will be carved up into Serbian and Albanian parts. Such a scenario, in turn, can set off disintegration processes in Macedonia, Bosnia and Herzegovina, Montenegro and even Greece (with Albanians enclaves in the north).

The Pesident of the self-proclaimed Kosovo Republic, Hasim Thaci, said that in the event of an agreement signed between Belgrade and Pristina, the Presevo Valley adjacent to the Kosovo border, would likewise join Kosovo.

According to him, “the requests of the Albanian population of the Presevo Valley for joining Kosovo are institutionalized,” and if an agreement is reached between Belgrade and Pristina, neither the EU, nor NATO or the US would be able to interfere with its implementation. Moreover, he said that the problem of Presevo will soon be discussed in Brussels anyway.

However, he once again ruled out the possibility of Kosovo proper being divided into Serbian and Albanian parts (which is increasingly being discussed in Serbian political and public circles), although he was rather vague about the possibility of “adjusting the Kosovo-Serbian border.” For his part, Serbian President Aleksandar Vucic supports the idea of carving up Kosovo, which he argues would help avoid a new conflict.

“A territory, if you don’t know how to treat it or who it belongs to, is always a source of potential conflicts and problems.” “I am foursquare behind this [separation] and this my policy, whether people like it or not. I am holding out for separation with Albanians,” Vucic stated. rts.rs.

Serbia’s current Foreign Minister Ivica Dacic was the first top-level politician to come up with the idea of dividing Kosovo, describing it as a long-term compromise solution to the Kosovo conflict. In an interview with the Pristina-based Albanian-language newspaper Zeri, Ivica Dacic, who was then First Deputy Prime Minister and Interior Minister, said that “the only real solution is to leave the Serbs in Serbia and separate the other part where Albanians live. It will be a working mechanism to quickly solve the problem. Other options will be just a waste of time.”

Many media outlets consider the division of Kosovo and a territorial exchange a very likely scenario. The Croatian newspaper Jutarnji List even claims that the matter is already a “done deal,” and warns of possible negative consequences: “In fact, it’s not just Kosovo. Pandora’s box may be thrown open. This could have a knock-on effect. Just imagine the worst possible scenario the partition of Kosovo could lead to. Bosnia and Herzegovina would immediately follow suit, followed by Macedonia. Montenegrocouldpossiblycomenext.” jutarnji.hr

The Albanian leaders of southern Serbian Presevo Valley, which is home to three mixed Serbian-Albanian communities, admitted the possibility of a “territorial exchange” as envisaged by pertinent agreement between Belgrade and Pristina, as early as in 2012. The leader of the Presevo community, Ragmi Mustafa, emphasized that the three communities (Presevo, Medvedja and Bujanovac) “must join Kosovo,” while “northern Kosovo must join Serbia.” He believes that a pertinent proposal should be discussed in Brussels.

Just as the President of the Turkish International Cooperation Agency in Ankara, Umut Arik, warned as early as in the mid-1990s, all talk about creating a security system in the Balkans makes no sense until “decisions relating to nation-states can be made and revised unilaterally”. This is exactly what has recently been happening around Kosovo. What is also evident is the interrelated development of disintegration processes going on in the Balkans. This may force the leading world powers and international institutions to abandon what they have professed all these years – “a policy focused on the state, rather than territory” as the University of Pristina professor of public law Enver Hasani puts it.

Such a policy provides for solving the problems of each Balkan country separately from one another. This approach was at the heart of the Stability Pact for Southeast Europe, devised by the European Union and introduced in 1999.

The unilateral declaration of independence for Kosovo in 2008 embedded in this concept a provision about the “uniqueness of the Kosovo case.”

However, amid the current impasse around Kosovo Serbs and the growing activity of Albanian nationalists, the international curators of the Balkan settlement, above all the most business-minded and openly cynical of them in the form of the administration of the US President Donald Trump, could switch to a “territory-focused policy,” which views a region not as an combination of already established states, but as a system of territories in dynamic equilibrium and, therefore, capable of reformatting.

“For some Balkan politicians, talk about territorial division and redrawing of maps is like adrenaline,” the Croatian newspaper “Jutarnji list” rightly wrote.

“The question is, what will happen to the federation of Bosnia and Herzegovina? Will this catastrophic disintegration of Bosnia and Herzegovina affect Croatia, or will a peaceful Bosnia finally emerge taking in “parts of Croatia”!? Another question is, how would the Bosnians and their defenders, such as Turkey, react to this?! Perhaps, for Serbia, the matter would not be limited to Presevo, and the processes would affect both Sandzak and the very north of Serbia. On the other hand, the exchange of territories with Kosovo could raise the issue of ‘consolidating the Albanian nation,’ which would revive old ideas of dividing Macedonia. And with the process of Albanian consolidation on and with the Republika Srpska already  part of Serbia, this would whet Serbian appetite, if not for the whole of Montenegro, then at least for its ‘Serbian parts,’” the newspaper forecasts and makes a sad conclusion: “Despite the seeming simplicity ("we give you, you give us"), this decision leads to hell.” jutarnji.hr

In all fairness, any new changes in the situation in the Balkans - and above all, the delineation of borders – will raise the discussion to a higher international level and may potentially bring them back to the floor of the UN and the UN Security Council where Russia  wields a veto power.

Simultaneously, such scenarios are forcing Belgrade to work more closely together with Moscow, which is one of its key international allies.

“The Serbian political class is aware that it cannot move forward without progress toward resolving the long-standing Kosovo issue. But in order to save face with its constituents, the Serbian leadership has to come up with some settlement in which Serbia will not be perceived as the total loser of the Kosovo dispute. To that end, Serbia must have a great power backer in the negotiating process, and as Serbia lacks a patron in the West, Russia is useful in that role. As long as Kosovo remains in play and as long as Serbian leadership lacks a settlement acceptable to public opinion, Russia will have a high place in Serbian foreign policy considerations. The West should be cognizant of this.For their part, both the European Union and the United States need to be aware that close ties between Russia and Serbia are in large part the result of taking Serbia and the Balkans for granted,” The American Interest emphasizes. the-american-interest.com

Given the situation at hand, Russia needs to figure out the possible options of such a reformatting of the Balkans and choose the ones, which are best suited to its geopolitical interests and those of its allies and partners in the Balkans region and beyond.