A new war in the Middle East? 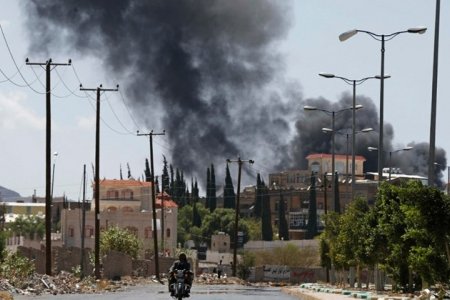 In the Middle East, a new stormy confrontation may emerge. After the ISIS militants’ defeat and the beginning of a political settlement in Syria, old confrontations within the Muslim world can cause a new explosion of tension and violence.
Saudi Arabia, Bahrain and Israel come out on top in the Middle East intending to create a powerful anti-Iranian coalition in the near future. The League of Arab States announced its intention to appeal to the UN Security Council with a resolution aimed at Iran and its influence in the Middle East. Israeli Defense Minister Avigdor Lieberman said: "We will not allow the consolidation of a Shiite axis in Syria as a base for operations against Israel." He did not mention that military counteraction to Iran is also possible. Addressing the countries of the region, he called on them to create a coalition against Iran, which, in his opinion, is "the main sponsor and sponsor of terror".
According to the Qatari channel of Al-Jazeera: Saudi Arabia is trying to unite the Arab world around the idea of counteracting Iran.
There can be no doubt that the US will support the smooth flow of anti-imperial coalition into an anti-Iranian coalition. The mere fact of such a coalition building will strengthen Trump's position in his attempt to bury the Iranian nuclear program and punish Tehran for intractability. The truth is that in this case, Iraq remains the Achilles' heel of American policy, where the Shiite government is unlikely to enter into an acute confrontation with Tehran. According to a number of Russian observers, a coalition war against Iran will blow up the Middle East and Central Asia, and, possibly, will spread to the nearby regions. This, in fact, will be an open interfaith battle between Sunnis and Shiites. The first, this time, will be supported by the West and Israel. At the same time, the situation will unambiguously lead to the fact that Syria and Iraq will be once again on the verge of the Civil War.
It is more difficult to answer the question: what position will Europe take in this confrontation, as it is not interested in a destabilization in the Middle East and is keeping a watchful eye on Saudi Arabia's attempt to play the first violin in the Middle East, not to mention the position of Tel Aviv, which is often criticized by the European countries.
Given that Iran has sufficient funds to withstand pressure from the new coalition and its intransigent position, the risk of a new war in the Middle East is very high.
Against the background of the foregoing, the situation in Afghanistan looks dangerously unstable. The November session resolution of the NATO defense ministers, which provides for the dispatch of an additional military contingent - only adds fuel to the fire. One of the basic requirements of the Taliban, which has evolved from a purely military force - into a powerful multinational opposition, is the withdrawal of foreign troops from the country.
In case of new instability in the region, Ankara will find itself in a difficult situation. Heading the Sunni state, Erdogan will have to reckon with this factor, and avoid a situation that would arm the opposition with accusations of his disloyalty to the faith brothers. At the same time, having gained a new weight in the region as a participant in the triangle of Russia-Turkey-Iran, Ankara becomes interested in preserving such a partnership. In addition, the Kurds support by the US and Israel raises Erdogan's understandable irritation. The aggravation of relations with NATO and Brussels also leaves an imprint on the regional aspirations of this country. "Strategic partnership with the West, which lasted for many years, is now hanging balance," the Turkish edition of Sabah writes. NATO has become an enemy, which operates out of thin air. Turkey realizes that standing still, we can not jump over the traps set for us. We must do many moves simultaneously. That is why Erdogan's visits to Russia, Kuwait and Qatar are of vital importance. "
For many people in Turkey, protection of stability in the region implies, at the same time, the protection of themselves. Of course, they will have to agree with this criterion for assessing the future of the Middle East in Moscow.
Very soon we will see what tendencies and approaches prevail in regional politics, which will inevitably affect world politics as well. This is the inevitable historical specifics of the Middle East.