A new world order, or will globalization survive the coronavirus pandemic? 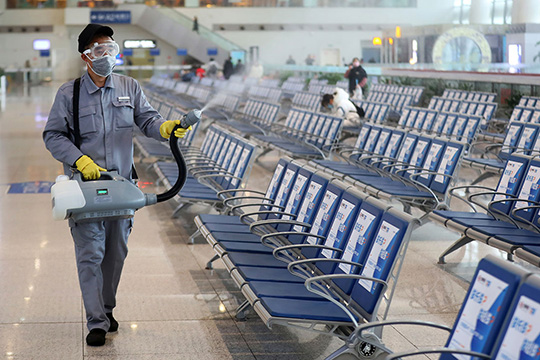 With the number of cases of coronavirus spreading in multiple countries around the globe, the outbreak has already been labeled a pandemic by the World Health Organization (WHO). Global economic relations have been hit hard by the virus, and demands for making the West less dependent on supplies from third countries are getting louder.

What impact could the COVID-19 pandemic have on the globalization process?

The current model of globalization took shape at the turn of the 21st century. A decade ago, the journal Russia in Global Affairs wrote that the whole concept is based on the notion that “the old market economy states will be able to simultaneously move their own production to China and maintain the economic balance of the Western system through financial transactions.” The crisis of 2008-2009 proved this approach to smoothing out "imbalances in world economic development" as being completely wrong.

In March 2014, Time magazine noted that “over the past two years, global trade growth has been lower than global GDP growth. It’s the first time that has happened since World War II, and it marks a turning point in the global economy, with sweeping implications for countries, companies and consumers.” Shrinking possibilities for productive placement of savings coming from peripheral countries “to the Anglo-Saxon center of the global financial system” have since intensified.

The situation has forced all of the world’s leading countries to double down and work out a set of measures guarding against a possible collapse of the modern world order. The policy of sanctions and financial and economic pressure that Washington has pursued the past few years appears to be provoking some governments to look for ways to create a financial and economic system or systems that would not be dependent on the United States. New political alliances are being forged in Eurasia, Asia, and Africa, including in the form of region-wide financial institutions.

Many in the US itself, the originator of the international system existing today, were getting increasingly unhappy with what was going on. The tweets and concrete isolationist measures taken by President Donald Trump during the past three years throw in question the feasibility of almost the entire “West-centric” development paradigm. As a result, by the time the first reports about COVID-19 started coming in, the dynamics of the financial and economic processes going on in the world were largely explained by America’s trade war with China, which has been going on for several years now, taking on ever new trade and economic areas and threatening to spread to the realm of finance.

On the outside, the coronavirus epidemic, which, like a sword of Damocles, is hanging over the current architecture of world economic relations, is a testament to Trump’s and his supporters’ foresight. Indeed, in his new National Security Strategy unveiled in 2017, Donald Trump said that the world had turned into a stage of global competition. Now that literally each day brings us new evidence of how much the West and the rest of the world  really depend on supplies from China, few in America and Europe have any doubts about the need to rethink the foreign policy of the previous decades.  Above all, the idea that cooperation with rival countries, their involvement in international institutions and world trade processes to the degree of interdependence, is making them “conscientious” members of the international community and constructive partners.

By the close of 2019, Washington’s policy of “breaking down the foundations” had significantly undermined the countries’ WTO-inspired confidence in a system of rules designed to prevent trade wars. Moreover, while previously the White House referred to “national security interests” as justification for the use of restrictive measures, any country can now use the  global epidemic as a convenient pretext for resolving trade disputes outside the framework of leading international organizations, primarily the World Trade Organization. Just as The Economist put it, “Much of what has contributed to globalization at its current stage no longer matters.”

The COVID-19 epidemic thus provides a convenient opportunity to legitimize the philosophy of a world order based on “egotism and protectionism.” Faced with the prospect of mass-scale deaths caused by the epidemic, (although so far unconfirmed!), one can discard the official condemnation of unilateralism and recognize it as "the norm, a natural part of the global picture," thus selling this new official policy to the people as “a focus on national interests.” [i] According to critics, this is the bottom line of America’s “revisionist geo-economic project,” promoted by the current administration, which ... “reflects the long-term goals of the US ruling elite even post-Trump.” [ii]

This narrative has received a further boost since, according to British media reports, not only the United States, but also a significant part of the world is critically dependent on the import of either antibiotics or communications equipment from China. Moreover, Western analysts believe that from a technological and logistical standpoint, getting rid of this overdependence would be easy because China’s dominance in many sectors of industrial and consumer goods began only 10-15 years ago. This means that the COVID-19 outbreak only threw this whole situation into harsh relief. Since the “forces of nature” are hard to predict, few people will call out the current restrictions on cross-border movement of people and goods within the framework of existing international legal procedures world trade is governed by.

But what about the political and ideological notions, according to which private companies are not told where to produce their goods when it comes to minimizing costs? How to dovetail public interests and the companies’ desire to maximize profits for their owners and shareholders? Finally, “national security”-boosting measures and restrictions imposed in the fight against a pandemic both make a breach in “the thin fabric of trade agreements,” that the whole world has been building the past decades.

Besides, the US establishment as a whole remains eager to maintain America’s leading position within the international system. In this effort, as Donald Trump’s first year in the White House clearly demonstrated, America wants more than just reaping “the benefits of bilateral trade relations, ignoring the benefits of participating in international trade agreements. Moreover, practice has shown such agreements can be worked out and implemented without the United States.” [iii] For example, right now, America is being held hostage to Saudi Arabia’s frustration with Washington walking back its commitments in the Middle East. Riyadh wants to reformat the global oil market through dumping offers, and the US shale oil industry, where booming extraction has spurred Washington’s readiness to apply sanctions as an instrument of foreign policy pressure, could find itself the first victim.

Western politicians’ and businesses’ past history of “outsourcing” all and everything could sap their desire to “quickly” reduce their dependence on China. True, the existing market configuration may come undone as the situation is getting increasingly unbalanced. Still, the search for "new equilibrium points" is already on. Changing times are always a period of searching for and finding new opportunities. And Western companies are not necessarily “doomed to success” in this race as Chinese manufacturers have repeatedly proved more able to adapt to changing market conditions than anyone else, while Western firms kept losing flexibility and ramping up development and production costs. Finally, it looks like China has already left the peak of the epidemic behind by effectively checking its spread. Chinese stock indices are on the rise. As for the Americans and Europeans, it seems that the main blow looks still ahead.

Theoretically, a possible slowdown of the current model of globalization may somewhat reduce frustration with the existing imbalances in development, but whether this deceleration is actually capable of mitigating the general structural problems that the global economy is facing today remains a question.

Optimists believe that "as the epidemic develops, its relative impact on the economy will decline." As for the impact of the virus on the economy, it will actually prove beneficial: the growth rate will slow down, but it will be a “healthier,” natural growth. Speculative “bubbles” in the asset markets will burst in a natural way, and the leading central banks will increase the money supply. All this will allow "... leading economies to maintain their growth, albeit at a slower pace, rather than fall into recession." This means that “a global crisis due to the epidemic is impossible.” [iv]

Critics, for their part, believe that the medical consequences of the coronavirus epidemic can prove much less destructive for global development compared with the measures that states may, if necessary, take to combat the spread of the disease. Experts at Oxford Economics are already warning that a policy of limiting communication and freedoms can only exacerbate the crisis and create additional problems in the future.

Ten years after the 2008-2009 crisis the COVID-19 epidemic is once again demonstrating to politicians, the business community and the general public the vulnerability of the current international financial and economic model. “Political pressure will be brought to bear on states and enterprises through consumers.” Many economic entities will try to reorganize production and supply lines, primarily by moving production closer to end consumers. The pandemic is sure to contribute to further “social atomization” and “online escapism.” Trade, education, medicine and the entertainment industry may finally go online. [v]

Finally, the authorities in many countries are likely to work out measures to restore or expand domestic production in strategically important sectors, including the food and pharmaceutical industries. The policy of state support for domestic producers is gaining popularity again.

“The goal is not so much to limit international trade, but to create a reliable domestic market that will be less dependent on conflicts and the challenges posed by global trade.” [vi]

The current configuration of the world order is not just becoming ideologically unsustainable. It now appears absolutely impractical and even dangerous, in the technical sense of the word, in the event of new global upheavals, whether humanitarian, technological or climatic. Globalization will obviously continue to evolve, both ideologically and from the standpoint of application. There is no way that new contacts between people and countries can be completely prevented, but globalization will be taking on new forms, no doubt about that. The international community will have to find a new balance between the priorities of national and global development. Under the circumstances, it is imperative for Russia, just like for any other country, to keep pace with the demands of the day.

The views of our contributors are their own and may differ from the position of the Editorial Board.