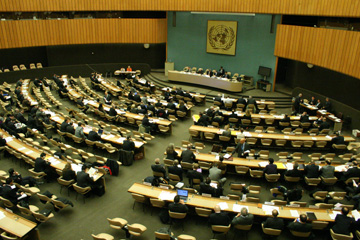 I think the Geneva meeting was a belated realization of something the ex-president Viktor Yanukovich suggested doing back in November 2013, when the first scandals around his refusal to sign the Associsation Agreement with the EU erupted. At the time (which looks like a distant epoche now) he suggested TRILATERAL negotiations between Ukraine, the EU and Russia, to sort out all the differences. The EU then refused, saying that Russia was one party too many at the talks. The coup d'etat, the takeover of Crimea and the Ukrainian East's own Maidan became consequences of this refusal to (tri)dialogue. In Geneva, there was not only a trilateral meeting, but one more important party joined - the United States. But there is agian one more party still missing - the representatives of the East Ukrainian protesters. This time, Russia suggested their participation and the US said it was one party too many. That means that the protest in Eastern Ukraine will continue, since the grievances of these people won't be addressed. (Why? Because the registered desire of the Geneva meeting to "disarm all the illegal armed formations" will be interpreted by the Ukrainian government as being directed against the pro-Russian protesters in the East in the first place. And the promise of "inclusive" constitution is too vague to include what the protesters want - federalization and more rights for the Russian language). By refusing to see the REAL grievances of Russian-speaking Ukrainians (and Russians before them), the Western partners of Ukraine multiply the number of aggrieved parties. And each time they finally agree to let the "unloved" party to access the talks (like they agreed to invite the Russian foreign minister Sergei Lavrov to Geneva), it is already too late. By that time, the situation degenerates further, with new aggrieved sides appearing in bad need to have their voice at the talks (again denied by the EU and the US). The conflict in the East of Ukraine won't stop, until the Western parties learn to see it as a genuine protest and not a Russian “incursion.”