About Lviv, In A Travel Notes Style 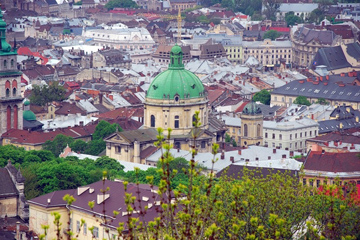 Lviv is an ancient city, whose history is inextricably linked with the history of Russia. These days, Lviv is not associated with Russia, but with the Ukrainian nationalist ideology. Many people mistakenly think that Lviv is not only the center, but the epicenter, the main place for nationalist ideas, but that is not correct.

In contrast, in Lviv you can easily hear Russian spoken. Beautiful and monumental, the old quarters attract a lot of tourists, including from the south-east of Ukraine and Russia. Knowledge of the Russian language is a practical necessity for the people of Lviv. In cafés and stations, in the theater and on the streets you can easily, and are even welcome to talk in Russian. This does not exclude the possibility of hearing aggressive attacks from the mouth of some fanatical patriot in "Ukrayinska Mova" (Ukrainian language), but in Lviv this probability is several times less likely than in other Western Ukrainian cities, such as Ternopil, Ivano - Frankovsk, and so on.

It also does not mean that the city of Lviv is Russophile. There is also a street named after the terrorist Dudayev here, and on it there is a shop bearing Bandera symbolism. Also, in this regard, there is a brightly painted figure trumpeting an OUN - UPA warrior (Ukrainian nationalists). On the shelves of the bookshops there are colorful editions of the history of the UPA and the red-and-black flags of the criminal units. Lviv drivers love to put such small flags on the dashboard of their cars.

The city has persistently attempted to uproot all things Russian. There is a bas-relief in honor of Ivan Vahylevych, Markiyan Shashkevych, and Yakov Golovatsky, which describes them as figures of Ukrainian culture. I do not know whether the present day people of Lviv know the words of M. Shashkevych: "You may weed out my eyes and my soul, but you will not take mercy or faith from me, for I have so much Russian in my heart." I do not know whether they know the lines in a letter from I. Vahylevych to the historian M. Pogodin: "We are both sons of Russia ...” Do they know about the true political beliefs of Yakov Golovatsky, who preached the unity of the Russian people from the Carpathians to Kamchatka?

Galicia diligently tried to get rid of Russianness, replacing it with opposite ideologies: filling the libraries and universities with the "ideological and literary" works of the founder of Ukrainian nationalism Dmytro Dontsov, who was very close to Nazism and racism, and they placed memorial plaques on the walls in memory of the active members of the OUN – UPA, and so on.

But Russianness blooms through in Lviv, showing its Russian Galician origin. The renaming of Shashkevych and Golovatsky as Ukrainians is not enough for the rest of Russia to forget their all pervading Russian views. A full-scale Ukrainianization was not enough for the people of Lviv to no longer call their children by traditional Russian names. "Nastynka, come with me, " one Lviv woman requested to my daughter in Ukrainian in front of me. Graffiti on a wall declared “Nastya, I love you," and also you can come across hairdressers and cafes called "Natalia "or "Anastasiya ", for example. You can hear Russian youth slang spilling from young people’s lips, and sometimes even swearing, no different from that of the Russian provinces. Sometimes the sounds of Russian pop music can be heard from cafes. If it were not punished by the authorities, there would be even more Russianness in Lviv.

There is a street in Lviv called Ruska (Russian Street) with a plaque in memory of the famous church Metropolitan Piotr Magila, who was trained within these same walls, in the Orthodox brotherhood. In the times of P. Magila these brotherhoods served as centers of cultural, social and intellectual Russian Orthodox life in the face of pressure from the Polish-Catholic environment. Regarding P. Magila, who was born a Moldovan, his contemporaries said that he was even more Russian than the Russians themselves. For sure, the students of Lviv are not told this…

Here you can feel the massive presence felt from different cultural influences. The pompous Catholic and Unitarian cathedrals, the Polish sounding voices on the streets, the names of some famous people of Lviv with the clear imprint of the Catholic tradition (such as Jerzy Franciszek Kulczycki). Previously, the Lviv Poles had their own dialect - the so-called “gwara lwowska”, which is still used in literature for stylistic purposes.

The people of Lviv have their own myths and legends, and some of them have been picked up by a confidently modern Ukrainian historiography and literature. The same Jerzy Franciszek Kulczycki is called the "Ukrainian who taught Europe to drink coffee." He learned how to make coffee when in Turkish captivity, and later opened the first coffee house in Lviv. But to call Jerzy Franciszek Kulczycki who lived in the XVII century a Ukrainian is clearly a stretch. In those days the Ukraine as a nation did not exist. Another stretch is to describe Lviv beer as Ukrainian, with its origins in the XVIII century. For the same reasons as for Jerzy Franciszek Kulczycki, if anyone has the right to be known as the producer of Lviv beer, it's either the Lviv Poles or the Lviv Jews.

Lviv has its own unique charm. Built in the period of Austro -Hungarian rule, it tries to keep this charm, which makes it so attractive for tourists. Lviv is beautiful in any weather, and regularly holds live concerts of music from the Austro-Hungarian era. Along with the famous Lviv coffee houses, which have inherited their atmosphere down through the centuries, all these things make it unlike any other Ukrainian cities.