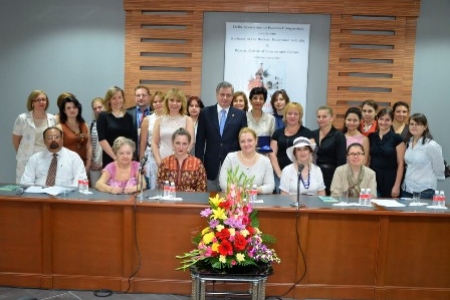 I’d like to attract attention of the honorable readers to the issue of the activities with the purpose of spreading of Russian language in India. It looks especially urgent in the light of some quite important and memorable dates commemorated  these days: the 50-th anniversary of the RussianCulturalCenter and the Center of Russian Research at JawaharlalNehru  University  open in 1950 inNew Delhi. Thereby the process of studying of the language and culture of our country turned ordered and systematic, though there were enthusiasts now generally called "russianists” that had appeared among the  Indians much earlier. It is known that it was the first Russian General Consul in India, Baron Vassily O. Von Klemm  (1861-1938) who contributed  greatly for the visits of civil servants of different levels to Russia to study Russian language considering it one of the key tasks of the activity of the Russian diplomatic mission in Bombay.

Currently Russian language is taught in more than 40 Indians institutes of higher education including Jawaharlal Nehru University, New Delhi University, Jamia Milhia Al Islamia University and also some regional institutes of higher education – universities of the cities Punha, Mumbai, Chennai and institutes of higher education of smaller towns – Collhpur (State of Maharashrah), Wododara (State of Gujarat), Revah (State of Uttar Pradesh), etc. Russian language is studied also in schools in various regions of India. There are Russian Centers of Science and Culture (RCSC) in New Delhi, Chennai, Mumbai, Trivandhum and Calcutta, important centers of russianistics with their courses (Institute of Russian Language) using Russian state programs and textbooks. Systematic work in this field is ensured by the Educational and Methodological Center (EMC) of Russian Language open at the RCSC in New Delhi in the end of 2011.

According to the traditional practice the teachers of Russian language in the RCSC are Russian nationals. Thanks to the Russian Centers of Science and Culture they not only find a professional job, but also have the possibility of professional development in terms of federal task program "Russian Language”.  We are rightfully proud of our humble contribution to the cause of promotion of Russian language and culture abroad. They don’t just teach Russian at the courses, but also work constantly with the purpose to accustom the students to Russian culture. It would be difficult to specify all the projects and clubs and we’d like to name only several ones. So there’s a successful project "Contemporary Russia in the Cinema” functioning in New Delhi under the supervision of the club "Cinema Planet”, an art studio, the Museum of the Rerikhs, etc.

It is interesting the experience of our centers in other cities of India. The courses of Russian language at the RCSC in Trivandrhum are more than 35 years old, and representatives of several generations of Indians learned Russian there. They are school and university students, doctors, businessmen, guides, engineers, members of the staff of nuclear power plant "Cundanculam”, of Indian Space Research Organization (ISRO), members of the personnel of the Indian navy.  With the widening of the spheres of mutually beneficial Russian and Indian cooperation   there’re are new career prospects opening in India for the people who have dominated Russian language. Considering targeted requests from students the colleagues from Trivandhrum organized specialized courses: "Russian for excursion guides”, "Business Russian”, "Russian conversational speech”. The courses "Russian language in the sphere of travelling” (for the hotel business staff), "Russian language for personnel of the Indian navy in city of Cochin” have special popularity. The russianists from Trivandrhum widely use the innovational technologies: it is very popular an interactive video course of Russian broadcast through Indian governmental space satellite "Edusat”.

Russian nationals in Chennai have created a drama studio "Nadejda” ("Hope”) which works with a great success.  .

There is an interest in Russian culture traditionally existing in India. But in 1990-th there was a significant slow-down in the dynamics of studying and spreading of Russian language in the country. And some reverse trend has been being noticed only during the last years. It is anything but a secret, that in 1990-th it were considerably reduced or totally ceased the activity of a number Russian organizations and state programs efficiently contributing to the cultural, educational and scientific presence of our country in India. Cessation of issuing of periodic editions, of publication of Russian literature translated into various Indian national languages, of regular tours of art and musical groups, of constant interaction in the spheres of education, health, art and scientific research, - all that slowed down the development of the cooperation. That’s why the federal program "Russian Language” (2011-2015) had an enormous importance and still has it now. In terms of this program there had been carried out supplies of academic and fiction books to the RCSCs then to be distributed in more than 40 educational institutions of India. They delivered excellent collections of fiction of the "Library of Fellow-countryman”. It had been organized a number of serious scientific and practical events – extension courses for russianists, Days of Russian language, Weeks of Russian culture, promoted several festivities in terms of the Year of Literature and the 70-th anniversary of the Great Victory which had a great public response and attracted a great attention not only of the russianists and of the people learning Russian language, but of all who cherished kindly feelings for our country. Events of this kind are very important for the maintenance of the unique status of our country in public conscience of the Indian people.

I think there is no any special need to prove that Russian nationals living abroad play a special role in preservation and consolidation of the positions of Russian language and Russian culture in the world. It’s also an issue of essential importance for the formation of the image of Russia in the eyes of foreign public opinion. Russian diaspora – it is a substantial help to the efforts of the State wishing to achieve the aims of our country in the international arena by means of the "mild strength”. According to the Minister of Foreign Affairs, Serguei Lavrov, it can help Russia to influence the surrounding world, positioning its civilizing, humanitarian and cultural, foreign policy and other appeal.

Since 2004 there were being taken first steps to unite citizens of Russia and of the CIS with permanent residence in New Delhi. Now exists the Indian Association of Russian Compatriots (IARC) created recently which unites the whole country on this base. You may recall a number of successful projects which it carried out during the last three years: winners of the competitions "Hello, Russia” promoted in terms of the program of "Rossotrudnichestvo” visit Russia every year; there are free Sunday courses of Russian language and culture open for children of Russian nationals; the youth wing of the IARC now has the possibility to take part in international youth forums. There are closing events making it possible for the participants of the voyages to share their impressions. It is a unique possibility for blended families to hand down the culture and traditions to the children growing in India.

At the present time widening of teaching of Russian language is seen as one of the key directions if the humanitarian cooperation with India and the nationals play a visible role in this process taking an active part in the activities of the RCSCs. The events being carried out are featured with a variety of forms and ways. So in the Institute of Russian Language at the RCSC in New Delhi they have regular contests of Russian language for students and school pupils, quizzes of country-specific studies, and various competitions – ones of Russian poetry reciters, literature essay, drawings illustrating well-known books. There are quite popular Days of Russian Language, Literature and Culture held at the RCSC in New Delhi which practically turned a traditional yearly festival with hundreds of participants. It is difficult to overrate the significance of these events which encourage young people studying Russian language, contribute to the support of teachers-russianists and to the maintenance of the positions of Russian language as a tool of international communication.

The members of the IRCA take an active part in the organization of the Days of Russian Language and other festivities dedicated to Russian culture held in Indian schools. The practice of get-to-know tours to Russia organized for students and school pupils is an efficient incentive for Russian-studying people.

We seek some new forms of the activity contributing to spreading of Russian language and knowledge of Russia. In 2012 at the courses of Russian language at the RCSC in New Delhi was open a "Weekend School” for the children of fellow-countrymen with the basic purpose to render assistance to maintaining of the vernacular in blended families outside of Russian social and cultural environment. At the present time there study children aged from ten years.

Cultural and educational programs organized in cooperation with the associations of graduate of Soviet and Russian institutions of higher education and dedicated to commemorative dates of the national history and bilateral relations have turned traditional.  Indian students from courses of Russian language at the RCSCs take part in these programs too. Strait interaction with the members of Indian Association of Teachers of Russian Language and Literature makes it possible for us to be familiar with their problems. Resuming the interchange of teachers-natural speakers between Russian and Indian institutions of higher education at the present time looks like the most urgent step. Indian russianists more than once expressed their serious interest in such cooperation of mutual benefit.

Summing up we may say that the process of popularization of the Russian language in India now is acquiring some positive dynamics. However with an objective analysis of the state of affairs we have to admit the gaps and unused resources still existing in the field of this activity. The potential of Russian and Indian cultural cooperation is far to be explored completely. There quite a lot of possibilities of its substantial consolidation and diversifying. Russian nationals in India have to carry out some serious work moving in this direction.

We hope that basing on the results of the 5-th World Congress of Compatriots will be taken decisions helping us to achieve a new level of the interaction for the benefit of some substantial consolidation of the positions of Russian language not only in India, but throughout the whole world.