Afghan Drama: "The beginning and the end" 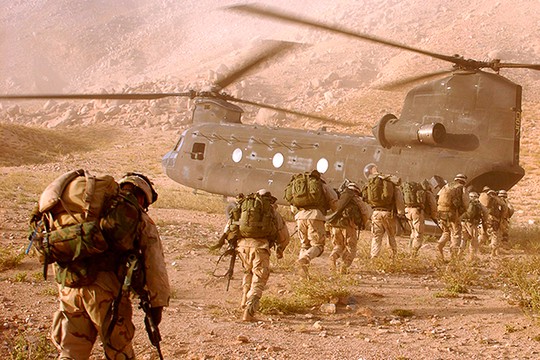 The Afghan war in the assessments of historians, participants and analysts has collected a huge amount of opinions and testimonies, from which, nevertheless, it is not so easy to create a comprehensive picture of this dramatic, if not to say, turning "episode" of our history.

We've set out the goal to present in our rubric the very various points of view both on the reasons led to the introduction of the Soviet troops contingent into Afghanistan, and on the course of this war, and, of course, on its political consequences. This will be a series of publications, which, I hope, will help readers form the most complete vision of what some call the "Afghan adventure", and others - the historical inevitability.

We will also try to introduce you the views of foreign politicians and authoritative observers of those years’ events.

Let's start with the memoirs of Anatoly Leonidovich Adamishin*** - a contemporary and eyewitness to all the stages of the Afghan epic, a well-known diplomat went from referent to the first Deputy Minister of Foreign Affairs in the USSR, and then Russia.

"The Politburo, more than once, unanimously adopted decisions directly providing for the refusal to enter the troops. The argumentation in this case was convincing, as it followed from Gromyko's speech at the Politburo meeting on March 17, 1979: "Our army by entering Afghanistan will be the aggressor. Whom will it make war against? Against the Afghan people first of all, and it will be necessary to shoot at them" (quoting from archival materials). And in December 1979, unanimously, except for Kosygin, voted for the opposite position? However, what did the Politburo have to do with it? Some of its members learned about the incident from the newspapers, and the resolution was signed retroactively.

Three not-so-young leaders (Andropov, Ustinov, Gromyko) apparently came to the conclusion that the Americans, taking revenge for the defeat in Iran, are going to tightly take over Afghanistan. The consequences of such a turn for the USSR security seemed to them the most serious, including the American missiles appearance near our southern borders. They would hold Siberia and Kazakhstan, including Baikonur, at gunpoint. The possible disasters list would be long. There appeared in it such an item as the seizure of Afghan uranium deposits by Pakistan and Iran. The whole question is how justified the alarm was.

The ideological factor played its role: the new leadership that overthrew Daud Khan declared socialist transformation as its goal. That immediately raised the country's rank in our eyes, and the International Department of the Central Committee began to actively deal with it. Perhaps it was spurred on by the fact that, according to our calculations, by the end of the 1970s, unlike the Cuban crisis, we were more or less on par with the United States in terms of military, primarily nuclear, arsenal.

Today, after the archives have opened, after the direct participants of the "Afghan cauldron" have written books or given interviews, it has become clear the Americans could have spoiled our blood, but they have not thought to enter Afghanistan. The CIA head at that time, Admiral S. Turner, said they did not even consider the possibility of armed intervention, believing it to be unaffordable and not promising great benefits. Their turn came later, when they repeated all our mistakes in Afghanistan.

Few people showed courage then, but they did. One of them was the Chief of the Armed Forces General Staff, Marshal N. Ogarkov. I met him repeatedly on official business. He made a strong impression with his knowledge of the subject, his sound mind, and his intelligence in the spirit of the Russian officer best traditions. It also turned out - I learned about those internal twists and turns later - he also had a rare sense of responsibility. More than once Ogarkov tried to prevent the fatal decision, and Kosygin supported him. Nikolai Vasilyevich was not afraid to go into the trouble when he was summoned to the Politburo narrow meeting, but he was simply shut out there.

A. Lyakhovsky in his fundamental work "The tragedy and valor of Afghanistan" describes it by the following way: "The problem must be solved by political way, without relying on force methods...We can get involved in military actions in a difficult country, without knowing the situation properly...We will restore all the Eastern Islamism against us, - Ogarkov said, - and we will lose politically all over the world." However, he was abruptly interrupted by Andropov: "Do military business! And we, the party, Leonid Ilyich will be making politics!" And further: "We have invited you not to listen to your opinion, but for you to write down the Politburo instructions and organize their implementation". Defense Minister Ustinov sided with the KGB head, despite the objections of the General Staff, the military, his subordinates.

Ogarkov was absolutely right: at the UN General Assembly, where we usually collected the majority of votes, 104 countries voted against us concerning Afghanistan and only 17 voted in favor. Later I read that Ogarkov was deeply "digging" history, especially the failure of Stalin's attempt in 1929 to restore Amanullah Khan, who was friendly to us, to the throne by military way.

When our soldiers entered Afghanistan in the daylight, I read from Varennikov, they were greeted with flowers: until that moment, they had seen nothing but good from us. In the beginning, we did not even think of getting involved in military actions. The idea was to set up garrisons in the centers of the most dangerous provinces and "not reply to provocations". But the logic of the war prevailed: once you put your own man, you must protect him. Babrak Karmal and his comrades again and again demanded holding military operations. By the fall of 1980, our units became involved in full-scale combat operations.

We were wrong to think we would not fight, and in the fact that we would soon leave, and in the international reaction. As I mentioned, at first we thought we would be able to preserve some of the multifaceted cooperation with the United States that remained after the Brezhnev détente. And then, we consoled ourselves with the fact that Afghanistan was just a pretext, not a reason for anti-Sovietism and the hostile actions that resulted from it.*

And here is the final of the story narrated by M. S. Gorbachev from the diary of his assistant A. S. Chernyaev:

"I’ve been to the Politburo today. Historical act concerning Afghanistan. Gorbachev has finally decided to end that. He has described the conversation with Karmal. He, Gorbachev says, has been taken aback, has not expected such a turn, has been sure we need Afghanistan more than he does, and has clearly expected we stay there for a long time, if not forever. So, it was needed to speak very clear: by the summer of 1986, you should have to learn how to defend your revolution by yourself. We help for now, but not with soldiers, and with aircraft, artillery, and machinery. If you want to survive, expand the social base of the regime, forget to think about socialism, share real power with those who have real influence. Rely on traditional authorities, restore Islam in the rights, the population customs, manage to make the people see they get something from the revolution. And turn the army into an army, put an end, finally, to the junkyard between the Khalqists and the Parchamists, increase the salaries of the officers, the mullahs. Take care of private trade – you will not be able to create another economy for a long time. And so on in the same spirit.

Concluded by the next: "With Karmal or without him, we will strongly pursue the line that should lead us to withdraw from Afghanistan in the shortest possible time".

Marshal Sokolov took the floor twice, and it was clear he would ready to turn away from there and was not going to give Karmal any concessions".**

Born in 1934 in Moscow. A citizen of the Russian Federation. Higher education. In 1958 graduated from the Faculty of Economics of the Moscow State University and the postgraduate course of the Institute of World Economy and International Relations. Fluent in Italian.

After graduation worked on distribution at the Institute of Scientific Information, and was invited to work at the Ministry of Foreign Affairs.

1960-1966 - worker of the USSR Embassy in Italy. Later - again work in the office of the Foreign Affairs Ministry.

1973-1978 - Head of the Department for General International Problems of the Foreign Affairs Ministry.

1978-1986 - Head of the 1st  European Department of the Foreign Affairs Ministry, member of the Board.

Since 1985 - Head of the USSR Commission for UNESCO, one of the Deputy Ministers of the USSR Foreign Affairs E. A. Shevardnadze.

1990-1992 - Ambassador Extraordinary and Plenipotentiary of the USSR to Italy.

In July 1994 was appointed Ambassador Extraordinary and Plenipotentiary of Russia to the United Kingdom. Prematurely resigned his parliamentary powers.

In August 1997 was appointed Minister for Cooperation with the CIS member States.

Higher School: in 1958 graduated from the Faculty of Economics of the Moscow State University and the postgraduate course of the Institute of World Economy and International Relations. Fluent in Italian.