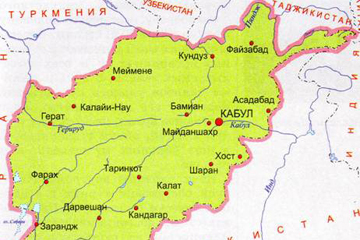 Wide-scale protest movements in the Middle East have not overshadowed the Afghan issue - on the contrary they have somehow clarified the state of things in Afghanistan. Now it is clear that in 2011 the situation there has become even more complicated: mass mop-up operations by US and NATO forces did not lead to the decline of Taliban and the situation is a stalemate. Grave economic situation, horribly low level of living, unprecedented level of corruption and embezzlement. The Afghan people are fed up with the 35 year long military political conflict and the presence of foreign troops causes strong discontent and resentment.

In such context reports about new protest movements in Afghanistan do not look surprising. The rise of two new movements – the Qur'an defenders and the Supreme Reformers Council proves that Middle East events have echoed in Afghanistan…

The supporters of the first movement went into the streets of even Afghan towns. In particular the towns of Mazar-e-Sharif and Kandahar saw mass riots and violence. Among the victims of those riots were even the officials of the UN representative office in Mazar-e-Sharif.

The demonstrations started after two US pastors had burnt Qur'an on March 20, 2011.  Reportedly, the campaigns were organized by the representatives of the radical Islam, who have links with Taliban. The campaigns widely used anti-American slogans, in particular against the US’ intention to establish military bases in Afghanistan after the withdrawal of foreign troops from the country.

Unlike the Qur'an defenders, the Supreme Reformers Council (though it also rates streets protests), focuses more on secular values and coordinates the actions of its supporters via the Internet. The movement’s declared goal is anti-corruption reforms in Afghanistan. In spring, the Supreme Reformers Council held a campaign in Kabul demanding President Hamid Karazi to dismiss several ministers who are accused of corruption.

The new protest movements in Afghanistan reflect the interests of two large social groups: the Qur'an defenders represent the people in provinces who are longing for traditional values and the authority of religious leaders. “The reformers” represent the interests of educated Afghan young people who are concerned with the modernization of the political system. These differences do not rule out an option of the merger of these two movements. Together they would be able to form a serious opposition to the current regime, which is unable to stabilize the situation even with the support from abroad.

With due diligence we can say that protest movement in Afghanistan has some resemblance with the movements in the Middle East, in particular in Egypt. The new Afghan opposition, a so-called “Third Power” also consists of two parts – the youth who are discontent with corruption and lack of reforms and the representatives of the church, who are opposing foreign (first of all American) presence in the country.

We should not rule out that under certain conditions “Third Power” will gradually form the new administration, which will replace the current one. In this case Taliban would agree to form the coalition with the new power which is unlike Karzai’s administration does not depend on the foreign military contingent. Another option is when the opposition, which comes to power representing patriotic and the most active groups of the population will be able to turn the civil war around.

Despite the uncertainty of the emerging protest movement in Afghanistan  many people in the country and abroad show interest in it. For example, the leader of the Islam party of Afghanistan G. Hekmatyar is trying to gain control over the Qur'an defenders movement to increase the number of his supporters and to claim participation in the government.  In his turn, the former Afghan Foreign Minister, one of the leaders of the North alliance, Abdullah Abdullah is trying to become the representative of the Supreme Reformers Council. But the leaders of the Council are opposing it as they reject any connection with the current political leaders and movements.

Some political analysts tend to look for the Pakistani trace in the emergence of the “Third Power”. Considering that the Pakistani special services used to work both with Mujahedeen and Taliban movements and created its own network in the north of Afghanistan this is quite likely.  The Iranian trace is not ruled out either especially considering that Teheran has serious influence in the west of Afghanistan and is trying to hamper the establishment of US military bases there, which makes it an ally of the Qur'an defenders.

Taliban may also influence new protest movements taking into account that Qur'an defenders share Taliban appeals to fighting the US and NATO.

At the first sight it is absurd to look for an American trace in the manifestations of new mujahedeens because the US is an evident enemy for the Qur'an defenders. But we should remember about terrible situation the US and its allies found themselves in Afghanistan. In this context the emergence of the Third Power able either to oppose Taliban or to agree with it and to stop the civil war, letting US and NATO withdraw troops and save face looks natural. That is why the US counting on “new mujahedeens” does not seem so unbelievable. Something similar happened before: the US first staked on Mujahedeens and than on Taliban. It has never been a problem for the US to reject its ally if its interests require it to do so.

The radicalization of non-Pushtu population in the north of Afghanistan (Tajik and Uzbek people), and a possibility that they create the United Front with Taliban increase the risk of the export of the Islamic radicalism to Central Asia and close to the borders of Russia.  The emergence of “new mujaheedeens” there may echo in Tajikistan, Uzbekistan, and Kyrgyzstan…

Joint efforts of the regional states are required to neutralize extremist forms of the new Afghan protest movements to prevent the merger of the Qur'an defenders with Taliban and Islamic party of Afghanistan. The creation of the “Kabul four” (Russia, Tajikistan, Afghanistan and Pakistan) became the first step in looking for the ways to stabilize the situation in Afghanistan, Pakistan and also in Central Asia. Switching of the Shanghai Cooperation Organization (SCO) to the settlement of the economic problems in Afghanistan could become the next step. Russia is ready to support Afghanistan’s entry to this organization.