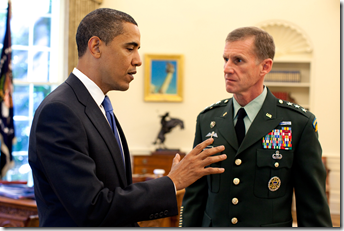 For the last few days following on the “Rolling Stones” interview by Gen. McChrystal and President Obama’s decision to replace him with Gen. Petraeus there has been a great deal of attention paid to the current situation in Afghanistan and what the change in command will portend for the strategy that Gen McChrystal had devised to achieve President Obama’s goal of disrupting dismantling and defeating the Al-Qaeda network and ensuring that Afghanistan did not again become a safe haven for terrorists intent on attacking the United States and its allies. By and large the comments have welcomed the Petraeus appointment as the best option available but they also suggest whatever Gen. McChrystal’s faults the military at least had unity of command while the US civilian team was not working together smoothly, that little progress had been made in improving the quality of governance in Afghanistan and therefore that the United States is losing the war in Afghanistan. More and more these reports and commentaries suggest that the American will to continue in Afghanistan is wilting partly because public opinion is no longer willing to support it and partly because the leaders too believe that this has become an unwinnable war.

In this context much was also made of reports that had started appearing earlier about President Karzai believing that the Americans could not win, being intent therefore on pursuing reconciliation with the Taliban and on enlisting Pakistan’s cooperation in this endeavour. It was conjectured that Karzai dismissed his interior minister Atmar and his intelligence chief Saleh not because they could not prevent the attack on the reconciliation Jirga in Kabul but because they were not prepared to support this policy and because the Pakistanis did not like the virulently anti Pakistan views that both these individuals had espoused.

After the dismissal of McChrystal attention was also focused on the visits that have been exchanged between Pakistan and Afghanistan. The Pakistan Army chief Gen. Kayani and his ISI chief Gen. Pasha reportedly conferred with President Karzai twice and Afghan foreign minister Zalmay Rasool had talks in Pakistan with his Pakistani counterpart. The speculation is that the Pakistanis are mediating a reconciliation agreement with both the Haqqani and Hikmatyar groups whereby in return for forsaking their ties with the Al-Qaeda these groups will be able to share power with the Karzai administration.

It is to be assumed that if these talks succeed the next step will be to identify the reconcilable among the Taliban leadership in the south and to bring them into the reconciliation loop.

It is significant that when questioned about the possibility of Haqqani-Karzai reconciliation, Richard Holbrooke during his recent visit to Pakistan, said he found it hard to imagine but then went on to say “who knows”. The world would read this equivocal comment as a signal that the Americans, while continuing to regard Haqqani as an implacable foe and the provider of sanctuary to the Al-Qaeda in North Waziristan, will not stand in the way of what they have termed the Afghan led process of reconciliation so long as there is a sundering of ties by Haqqani with Al-Qaeda.

It is apparent that nothing in Afghanistan is going according to the American plan primarily because the plan started with the flawed premise that largely illiterate Afghans could put together a security force that could start assuming responsibilities by July 2011 or even worse that an insurgency with broad support from the populace - no doubt induced by intimidation as much as by conviction or the need for employment - could be brought to closure quickly despite clear empirical evidence that such insurgencies take 15 years or more to quell (Like other observers I too believe that it is only in the last two years or so that the Americans and NATO have formulated and tried to implement a counter insurgency effort). It is also apparent that the American public beset now with economic difficulties has no stomach for continuing the struggle even though many realise that there is much truth in Obama’s frequent reiteration of the danger that the American homeland would face if Al-Qaeda regained access to a Talibanised Afghanistan. The Obama administration despite its brave words has now to find a way out of what is now being termed America’s longest war.

- Fixing a date for the withdrawal of foreign forces,

- Permitting de-centralised government with some provinces in the South and East being allowed under self governance to have a greater measure of Sharia as the law of the area,

- Ensuring, along with the withdrawal of foreign forces, the expulsion of all foreign insurgents and particularly the Al-Qaeda adherents that still remain in Afghanistan

- Facilitating the return of the refugees from Pakistan and the closure of whatever sanctuaries the Taliban had hitherto enjoyed in Pakistan,

In themselves these are formidable tasks which may well be beyond the capacity of the conciliating parties and those who help in the process. Even more importantly perhaps one has to consider how much of this will be acceptable to the other ethnic groups- the Tajiks, Uzbeks and Hazaras and to the regional countries that in the past had supported the Northern alliance and to whom the return to even limited power of the Taliban may be anathema? Will this reconciliation then become the ground for the sort of civil war that had raged in parts of Afghanistan in the years preceding 9/11 and will this then become reason for some elements in the south and east of the country to resort to the sort of activity that led to 9/11 and the disastrous consequences that this had for Afghanistan and for the region.

Viewing another facet, how much continued involvement of the western alliance would there be in such a reconciled Afghanistan? Clearly Afghanistan is going to need assistance to be able to maintain its armed forces, it is going to need assistance to proceed with rebuilding its infrastructure and to maintain the facilities it has managed to create in the education and health sectors. Karzai has said that the Americans would have to pay for the Afghan Security Forces for the next 15 years. The same could be said about what it would need for development

Recent reports about geological surveys showing that Afghanistan has mineral deposits that may be worth $ 1 trillion have created the expectation that Afghanistan may sooner than expected be able to rely on its own resources for its administrative and developmental needs. This is overly optimistic. Were all to go well it would, by my estimate, take at least 25 years before this mineral wealth can be exploited. Unfortunately all is not going to be well and it will then take even longer. What is perhaps more likely unfortunately is that the regional countries may well feel that they have an even greater stake in trying to bring to power in Afghanistan those who would offer these countries the best prospect for benefitting from these resources.

In short unless reconciliation is very astutely managed the prospects for peace in stability in Afghanistan and, by extension, the rest of the region are to say the least bleak. The situation is particularly perilous for Pakistan where the success of the sustained effort to eliminate terrorism and curb extremism is heavily dependent on peace and stability in Afghanistan.

Can the Americans and NATO forces ensure that before their departure they do manage to create conditions in which a hastily executed reconciliation does not lead the region into chaos? Are there things that can be done? I will attempt an answer in my next article.

Mr. Shaikh spent 38 years in the Pakistan Foreign Service before retiring in 1999. In the course of his career he served as Ambassador/High Commissioner in Canada (’87-89), Germany (‘89-90), USA (’90-91) and Iran (’92-94). He was Foreign Secretary from 94-97.In 2002, he served as the President’s Special Envoy, and met with leaders in Russia, Iran, Uzbekistan, Indonesia, Singapore, Malaysia and Japan to explain Pakistan’s point of view and in 2005 visitedYemen, Sudan, Kenya and Bahrain Currently he is a member of the Board of Governors of the Pakistan Institute of Strategic Studies, Islamabad,