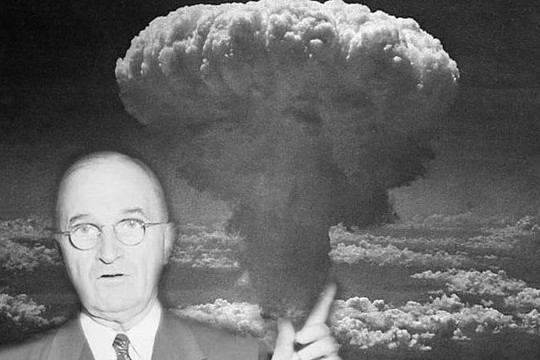 Anatoly Koshkin from the Strategic Culture Foundation has drawn public attention to the results of the recent research by Professor Тetsuo Arima of Waseda University.  The title of Tetsuo Arima’s article indicates that it was written on the basis of documents which were found by the author in the course of his work at Maryland and Oxford Universities and which testify to United States plans to use nuclear bombs after the Second World War.

Just like in the United States, people in Japan are made to believe that the destruction of Hiroshima and Nagasaki saved millions of Japanese and American lives by allegedly preventing bloody battles on the country’s territory. However, Professor Arima refutes the opinion that Japan surrendered as a result of the American nuclear attack. He writes: «The cruel use of American nuclear bombs aimed to exert a fierce pressure on the USSR with a view to make it more agreeable. This runs counter to the position of the US government under which the nuclear bombardments are presented as measures that “saved the lives of millions of American soldiers” and “facilitated the end of the war”.

The nuclear bombs were dropped on civilians in order to impress the USSR, rather than “severely punish Japan for Pearl Harbour”, President Truman said.

The author of the article, which was published in Daily Shincho,  has no doubts that it was Soviet cities that were President Truman’s next targets: «President Truman studied at legth the damage sustained by Hiroshima and Nagasaki, analyzed to the slightest detail the devastating power of the bombs and picked 66 cities for the next bombardment. Among those were Moscow, Leningrad and other cities of the rapidly developing USSR».

Professor Arima confirms the fact that the US government considered three scenarios of using a nuclear bomb:

3) to drop nuclear bombs on large cities populated by a large number of civilians.

And there was a choice:

а) to drop a bomb after a warning.

в) to do it without warning.

Most scientists who participated in the development of a nuclear bomb opted for the first variant. Representatives of the US army recommended dropping a bomb on a military base. But the Provisional Committee, which dealt with issues concerning the use of a nuclear bomb, came to the conclusion that the best option would be the bombardment of large cities without warning. «They deliberately chose the scenario that would lead to most human suffering», – Professor Arima writes.

…The article calculates the devastating effect of a nuclear bomb. Damage will be inflicted on all building in a radius of 1.8 kilometers from the epicenter, while only half of those located within three kilometers will sustain it.

As becomes clear from the calculations, a nuclear bomb presented a threat to human lives but not for solid structures. «This fact demonstrates how anti-human Truman’s decision to drop a bomb without a warning was. If the civilian population had been given a chance to leave the area, there would not have been so many fatalities even near the epicenter… Even in wooden houses the death toll would have been considerably lower», – the Japanese researcher says.

Having received the assignment, General Leslie Groves (1942-1947 – he oversaw a military program on the development of nuclear weapons) and his team analyzed all intelligence data on the USSR and selected 66 cities “to be neutralized”. They then determined the top 15 targets and examined the size of city territory to establish how many bombs they would need. Given that one bomb neutralizes a territory within a radius of 7,000 feet, the number of bombs required had to be increased depending on the presence of strategically important military facilities.

The Manchu cities got on the list because they were occupied by Soviet troops and had industrial facilities which had been built by the Japanese. In addition, there was a plan to carry out a nuclear bombardment of the Kiel Canal (Germany), the Dardanelles (Turkey), and the Suez Canal (Egypt).

As testified by the research conducted by Professor Arima, the minimum number of nuclear bombs needed to hit the target of war against the USSR was 59, maximum – 224. The B-29 fighter was to become a means of delivery. Ten airfields were needed for the bombardment of the USSR and Manchuria. The list included Okinawa and Shumshu (Kuril Islands), as well as Bremen (Germany), Foggia (Italy) and Crete (Greece). Since Shumshu was under Soviet control, it was to be seized on “Day M” (the day designated to mark the start of the Soviet-American-Soviet war).

Professor Arima describes the plan of a nuclear bombardment of 66 Soviet cities as “a plan on paper”, explaining that by the end of 1945 the United States had created only nine nuclear bombs, and only seven of them were combat-ready.

«On August 29, 1949, well before the United States completed the creation and deployment of 224 nuclear bombs, the USSR successfully carried out nuclear tests.  A nuclear race followed that continues to this day. And Japan, the only nation that experienced the effect of a nuclear bombardment, is one of the participants in this race», – the Japanese professor concludes.