Aleksandar Vučić: “If I wanted to be the number one hero in the world today, it would be enough to say anything against Putin, and everyone would reward me and say that I am the greatest democrat in the world" 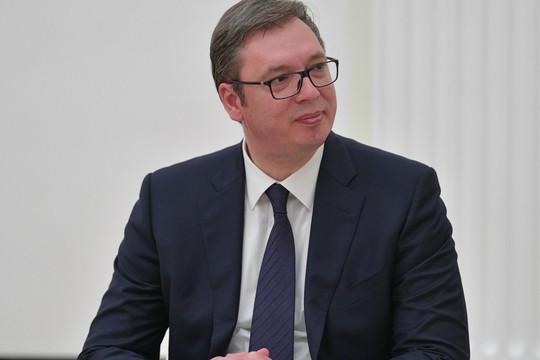 Serbian President Aleksandar Vučić received Russian Ambassador Alexander Botsan-Kharchenko and informed him about the current situation in the Western Balkans. Vučić stressed that Serbia being part of Europe will continue to maintain its traditional friendly and partnership relations with Russia and China. He also reminded that Serbia remains the only European country that did not support sanctions against the Russian Federation despite its anti-Russian vote at the UN.

On the same day, during his speech on Pink TV channel, the Serbian leader made a number of statements about Russian-Serbian relations. He said that Serbia is waiting for gas negotiations with Russia. "Whatever agreement we sign, I think it will be better than in other EU countries. It won't be free of charge, and it won't be the same as before. Everything that happens now will affect the price. The oil price is ruining us," - the Serbian president said. According to Vučić, the price per gallon of gasoline in America has increased from $3.7 to $5.9 while the whole world is changing. "We don't live outside the world? – he added - At the same time, we cope with the difficulties better than others. We didn't tell anyone that we would turn off the heating, that there would be no hot water, that there would be no wheat or corn. “If I wanted to be the number one hero in the world today, it would be enough to say anything against Putin, and everyone would reward me and say that I am the greatest democrat in the world," - the Serbian leader also said.

According to him, it costs the country dearly that it has not imposed sanctions against Russia. "We know everything from the past. Russia has always supported Serbia's territorial integrity since 2001. Our duty is to act in accordance with public international law and respect the principles. So we joined the ranks of a small number of countries that can be proud of it. It costs us a lot, but we make decisions every day in the interests of the citizens of Serbia," – Aleksandar Vučić said. "One of my good friends said today: "Russia has been defeated, it's over, come here or there". And I asked – what does the monuments to Zhukov, Dostoevsky, Tchaikovsky have to do with it. He says, "Who cares, they'll take it all out of the textbooks." And I said no, we won't do it. Should we expunge Shakespeare for the fact that the British are sending weapons to the Albanians?" - the President asked.

He also noted that Serbia keeps air transportation with Russia not for profit, and that foreign services are behind false reports of bombs on Air Serbia flights. "Our airline operates on principle, because we are a free country deciding everything by itself. And to those who tell us about our "bloody hands" because we still have these flights, I say: shame on you all, you are hypocrites and liars! Did you cancel flights when 19 countries bombed our country? Nobody helped us, nobody. Everyone was silent, as if they had filled their mouths with water. One day then little Milica Rakic was killed. What was the life of this child worth!? Brother Alexy and his sister born later, would like to have her as a sister. Or is Serbian life less valuable? - President Vučić emotionally asked.