Alexander Lukashevich: OSCE is not in its best shape 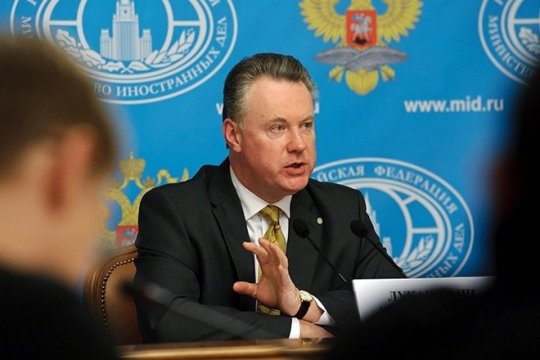 The Organization for Security and Cooperation in Europe has celebrated the 45th anniversary of the signing of the Helsinki Final Act. The news agency Rossiya Segodnya marked this memorable occasion by hosting an online briefing by Russia's Permanent Representative to the OSCE Alexander Lukashevich.

“August 1, 1975 ushered in a new era, marking the beginning of a new thinking in European politics. It is hard to believe that ideologically different countries still found the strength and courage to sign a document that was supposed to define a new geopolitical order in Europe and the Euro-Atlantic,” Alexander Lukashevich said.

He added, however, that the OSCE today is not in its best shape, and emphasized that the principles laid down in the Helsinki Final Act were originally meant to end confrontation, minimize conflicts and promote cooperation in a number of areas. In other words, the new world order that the countries – members of what was then the Conference on Security and Cooperation in Europe (CSCE), planned to build was supposed to function according to the rules of peaceful dialogue and multilateral cooperation. Sadly, things have since unfolded according to an entirely different scenario.

Alexander Lukashevich believes that the OSCE has evolved under the strongest influence of external forces, and that the 1990s were a turning point in its development. These conflicting political narratives clashed in November 1990, as the countries were preparing the groundwork for the Paris summit and the signing of the Charter for a New Europe. The question was who would be running the show in Europe and the Euro-Atlantic area - NATO and the European Union, or an emerging new reality in the form of the OSCE, which “absorbed” the countries making up these two alliances.

According to Alexander Lukashevich, back then the OSCE was not taken seriously and was just assigned the role of “the guardian of human rights.” He quoted US President George H.W. Bush who, during a February 24, 1990 meeting with West German Chancellor Helmut Kohl said that "the CSCE cannot replace NATO as the core of the West’s deterrence strategy in Europe and as the fundamental justification for US troops in Europe,” concluding that “if that happens, we will have a real problem.”

“Our Western colleagues’ thinking hasn’t changed ever since. The countries of the North Atlantic Alliance and the EU still believe that they are the only ones who should set the tone in European affairs,”  the diplomat emphasized. He regretted the fact that the OSCE’s anniversary had gone virtually unnoticed.

“The dream that began in the 1970s and continued through the 1990s still remains a romantic aspect of European politics. Despite all the commitments and promises made by the West, the OSCE has failed to become the foundation of a new thinking in Europe and the Euro-Atlantic area. Life is governed by different rules: cooperation and dialogue have recently been replaced by rabid Russophobia and confrontation on all tracks,” Lukashenko noted.

He believes that the OSCE needs a radical reform and that Russia is seeking a fair geographical balance within the Organization, which is seen by many as a 100-percent Western structure. Indeed, during the entire existence of the CSCE/OSCE, not one representative of the Commonwealth of Independent States (CIS) has ever sat on any of its governing structures. “Is this fair? Of course not. We have the right to apply, if not for all four, then at least for some positions, for which, of course, we will fight with all revolutionary determination,” Alexander Lukashenkosaid.

This echoes the position of Russia’s Foreign Minister Sergei Lavrov who, during a 2018 meeting with then-OSCE Secretary General Thomas Greminger, said that “to ensure objectivity and impartiality, the organization should be reformed to correct the long-standing imbalance in its work. We also need to change the methods and practice of the Bureau for Democratic Institutions and Human Rights, which should be guided by the interests of all participating countries and not try to stick to one-sided approaches.”

Alexander Lukashevich believes that the CIS countries now have good chances for nominating their candidate for the post of OSCE Secretary General.

“Soon we will face a very crucial moment of selecting a new Secretary General. In terms of procedure, the competition is to end on September 18, which will be followed by a selection and confirmation hearings of candidates. I think that the CIS now has a very good opportunity for  nominating its own candidates for the job and cement its leading position in the organization's institutions,” Lukashevich said. With the final decisions expected in December, the political suspense will remain for at least another four months.

In the course of the briefing, Alexander Lukashevich also dwelled on the efforts to resolve the conflict in Donbass. On July 27, Donbass and Kiev agreed to a full ceasefire and additional measures to make it stick.

“Just how effective these measures will be depends on their implementation by Kiev, Donetsk and Lugansk. I do not think that this truce will last long, but I would be happy if I’m wrong,” the diplomat admitted.

He added that a political settlement in Donbass hit a dead end after the Ukrainian parliament’s decision on local elections. In July, the Verkhovna Rada voted to set the next local elections for October 25. However, the elections will not be held in the Donetsk and Lugansk People's Republics. According to Kiev, elections in the breakaway republics will be held in keeping with separate legislation, but only after they "restore Ukraine's full control along the state border, disarm all the illegal armed formations, ensure security in the region and restore constitutional order."

“This flies in the face of the Minsk Accords, which clearly spells out the modalities of how the organizational parameters of these local elections should be coordinated with Donetsk and Lugansk, how their special status should be formalized and permanently enshrined in the Constitution of Ukraine, along with the elements of this special status,” Lukashevich stressed. He believes that the decision made by the Verkhovna Rada has created a new situation that endangers the prospects of a lasting settlement of the conflict.