Alexander Ponomarev, Artist and Commissar of the First Antarctic Biennale of Contemporary Art: “We all are in a submarine…” 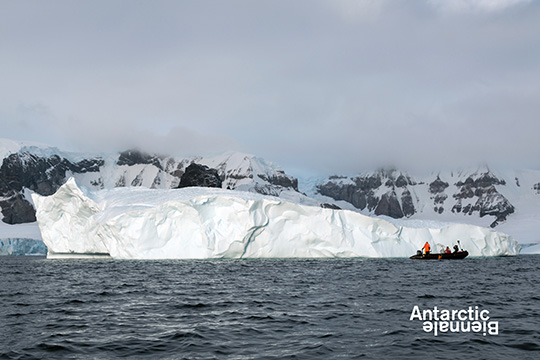 Long before over a hundred artists, architects, scientists, researchers and philosophers from many countries sailed to the Antarctic for the First Antarctic Biennale of Contemporary Art on the Russian research ship Akademik Vavilov in 2017, its ideologist and commissar, the artist Alexander Ponomarev had realized projects best described as grandiose on different continents and at different latitudes. It is only natural that Ponomarev has long been referred to as the most seafaring artist not only because his colourful submarines have for years been surfacing here and there — in the Barents Sea, the Grand Canal of Venice, the Louvre, the Loire River and the Museum of Monaco, to name a few – but also because he served as a submariner after graduating from the Odessa Naval School and before embarking on the career of a contemporary artist. The artist himself says that he is most interested in “the art for birds and fishes”, in which the elements – space, water, ocean, desert and sky – have the chief role to play. However, it was precisely the First Antarctic Biennale that became a unique phenomenon, in which creative quests of Ponomarev the artist and explorer merged with a new type of cultural diplomacy. During the First Antarctic Biennale its participants covered about 3 000 kilometres and made twelve landings on the Antarctic peninsula and nearby islands. Over a score of art projects, including performances, installations, photo exhibitions and music experiments, have been implemented on the continent.

Alexander Ponomarev discusses with Elena Rubinova, International  Affairs observer, the philosophy of the floating biennale, the activities of the Antarctic Biennale Vision Club, preparations for the 2019-2020 expedition and a recent trip to Japan, where the First Antarctic Biennale team successfully presented its project as an ideology and new socio-cultural phenomenon.

You have recently returned from the Echigo-Tsumari Art Triennale in Japan, where the Antarctic Biennale team presented its project. How did the public and Japanese art community receive you?

We presented the Antarctic Biennale both as a past project realized for the first time in 2017 and a future one scheduled for 2019-2020 at the Echigo-Tsumari Art Triennale, which is a major forum of contemporary art (the Tokamachi city has held the art festival, a large-scale international event attended by up to 300 artists, once every three years since 2000. – E.R.). We have shown the biennale as an art project, ideology and new socio-cultural phenomenon that has no parallel in the world and is based on other principles. Together with our outstanding architect Alexey Kozyr, we made a new polar station called Fram-2. It is designed so that the structure can get frozen into ice and then be heaved by it and drift across the Arctic or Southern Oceans. According to our idea, the Antarctic Biennale – artist workshops and an arts center – are to be housed at that station. At the Triennale the project was presented as a mockup 4 meters in diameter, wonderfully executed by Marina Moskalenko and very beautiful. We are to develop our undertaking on the Antarctic shores and build the future as represented by this unique futurist project in the form of a snowflake. In addition, projects all the twenty artists carried out during the First Antarctic Biennale were also presented in a separate hall, mostly as mockups, on mounts with the Japanese-language translation. The film shot during the First Antarctic Biennale was premiered there. We brought to the attentions of the art community and the public at large what had already taken place, but through a prism of new opportunities. Let it be remembered that time in the usual sense does not exist in the Antarctic, so the past and the future are all relative in general. We have undertaken an absolutely singular incomparable project that has its own logic and philosophy and that has brought together associates and likeminded people from different countries — artists, architects, culture students, oceanologists, biophysicists, representatives of sundry non-profit organizations, businessmen and investors. 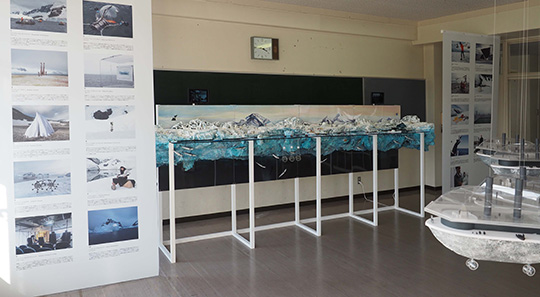 Although we attended the Echigo-Tsumari Art Triennale for the first time, it was far from my first experience of cooperation with Japan. Two years ago, I built a very serious and fantastic project on an island in the Seto Inland Sea within the framework of the Setouchi Triennale. The Triennale was curated by Fram Kitagawa, the founder of the four triennales that take place in Japan, who can by right be called the father of Japan’s contemporary art. Fram Kitagawa is an amazing personality with no less surprising name for a Japanese. Indeed, Fram means “forward” in Norwegian and is the name of the most famous expedition ship in the world. Today, this ship is a popular museum in Oslo. It was aboard the Fram that Amundsen came to the Bay of Whales to reach the South Pole for the first time. Japan, too, was actively involved in the exploration of Antarctica: the first Japanese expedition took place in 1911. It reached 82nd parallel south, quite an impressive accomplishment for that period. When one of the expedition officers returned to Japan, the nation met him with great enthusiasm and one grandfather called his great-grandson Fram, the only Japanese to have such name. In a word, it is not by chance that Japan is a country that shows great support for our project and highly appreciates its novelty. (and will without fail take part in the forthcoming Biennale?).

What countries are already involved in preparations for the project to be continued next year?

The First Antarctic Biennale was not merely an international project: it enjoyed a high international, to be more precise, “supranational” status of a cultural phenomenon. Another important fact is that the Biennale was held under the UNESCO aegis and with the support of the Russian Ministry of Foreign Affairs, which immediately took us under their wing. On the one hand, the project, of course, represents Russia – we have initiated it and are its chief organizers; however, our goal is not to involve one country or another in some readymade project. I can list the participating countries, such as Germany, the USA, Austria, China, Norway and Japan, among many others, but the most important objective is to form an international inter-cultural and inter-disciplinary community and platform for interaction which, by definition, includes various nations. We are moving confidently in this direction, although it is at times extremely difficult to find a course without any contradictions between ideology, politics and culture. In this sense Antarctica is the only place on Earth to have implemented an absolutely special type of “supra-national” sovereignty in the 55 years since the 1959-1961 treaty. This is a unique chance for cooperation between different countries and states that are frequently unable to come to terms in ordinary life. A floating biennale is in a way the apotheosis of cultural diplomacy.

How did the Antarctic Biennale idea come about and how long did it take to implement? What were your motives and why Antarctica in particular?

My art career, which is already 30 years long, has always related to the sea, and the elements – water, ocean, desert and sky – have played the main part in many of my projects and works. I have participated in many research expeditions of the Academy of Sciences in the Arctic and the Antarctic, and the biennale idea occurred to me during those expeditions about 15 years ago, more precisely, after an expedition to the South Pole. At that time, I did not even think of it as a biennale, even though as an artist I have contributed to many, including eight times to the Venice Biennale alone. Rather, I wanted to create such an activity field in the Antarctic that would fuse the scholarly and artistic components into a single whole. Incidentally, the idea was first supported precisely by the scientific community. It may seem that anything related to contemporary art is an absolutely alien world to scientists. This is not so, and now our outstanding oceanologists are my longstanding close associates. Somewhat later people who appreciated my work as an artist, museums and collectors got involved, the ideology and philosophy of the biennale took shape, and international forces and sponsors joined in. It took approximately two years to prepare the First Antarctic Biennale. The funding was international, just as it is in the Antarctic. We staged four exhibitions and fund-raising events in the Antarctic pavilion, the first in the history of the Venice Biennale, all of which enabled us to realize the project at the top level. 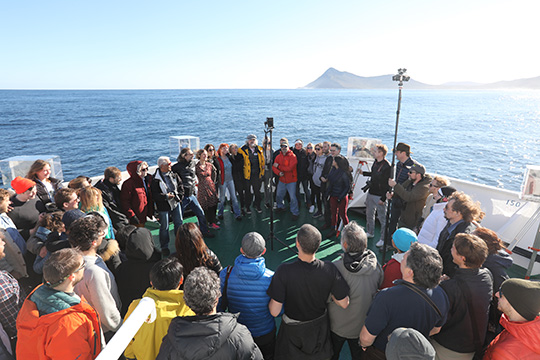 What function does the Antarctic Biennale Vision Club have between the biennales?

As I said, one of the key missions of our biennale is to produce an international inter-disciplinary platform that would accumulate ideas related to the existence of shared spaces: how will we people come to an understanding with one another with the aim of studying the ocean, the Antarctic and outer space. Founded before the biennale itself, the AB Vision Club forms part of our activities and carries on its operations in-between expeditions. We invite scientists, architects, museum curators and artists, hold debates and conferences. It is a sort of think-tank, a council of all those who are excited and attracted by this theme.

Clearly, the Antarctic Biennale differs from any other art forum. And what does it have in common with other biennales?

There are more differences than similarities, and that is why we called it an upside-down biennale, or a topsy-turvy biennale, which is reflected in our logo. Indeed, in the southern hemisphere, and especially in the Antarctic, people walk upside-down, as the Russian artist Andrey Kuzkin did in his performance there. In the commonly accepted sense we do not bring the public, the viewers to one place to present art. However, the prime distinction is its inter-disciplinary and supranational nature, although like other biennales ours is held once in two years. It is noteworthy that “mobilis in mobile” is a crucial principle of our Biennale. Navigation and sailing form the central process that enables the participants to create new meanings. 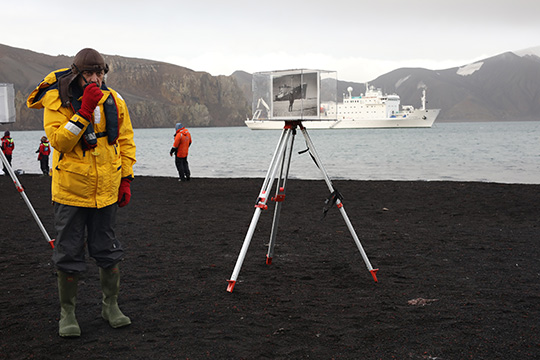 What do artists get from the mobile format and what themes are actualized in their works?

Sailing launches a certain mechanism of reflection that makes it possible to trace, register and document events in real time and the entire ship becomes a movable art construction. Artworks are adjusted to the display conditions, they are detachable, mobile and can be installed in different places and contexts. Weather conditions influence the implementation of projects and installations and the holding of performances. When people find themselves in the Antarctic, absolutely other mechanisms are switched on in them, namely, that we all are inhabitants of the Earth, that there are other dimensions and that space tells you that you are a human being. That is where “Cogito, ergo sum” of Descartes manifests itself. Far from everybody is ready for that, but artists involved in our project are ready and capable of expressing that. After all, they share the ability and desire to think in planetary terms about outer space, stars and nature. Feeling the Fullness of presence there makes it possible to put the problems of art and creativity into sharper focus. There, art itself gets a chance to become a step “from nature to eternity”, to quote Gibran Khalil Gibran. I myself experienced that state more than once and see how it works with others.