Alfred Rambaud: "The memory of Sevastopol is the common heritage of the two armies" 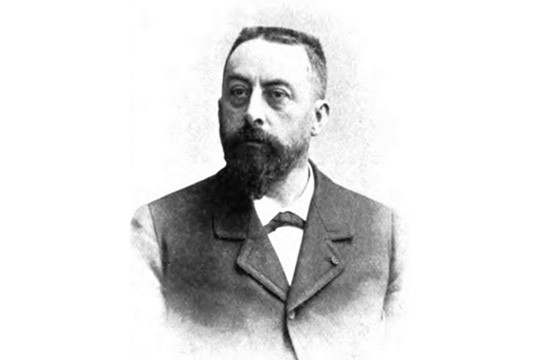 After the end of the Crimean ("Eastern") War of 1853-1856, the peninsula has become the pilgrimage place for many foreigners. The war and the theater of war itself have become an attractive magnet for a variety of foreigners, sometimes quite famous diplomats, historians, politicians and journalists. Of course, one fact played its role - the war participants themselves: French, British officers and soldiers - after returning to their homeland, did not skimp on sharing their memories with their compatriots.

The French were quite active in trying to discover the Crimea for themselves and their compatriots. French travelers in the Crimea in the 19th century left a lot of memories and impressions regarding the most diverse corners of such a varied cultural and ethnographic region as the Crimea, which was associated in the Europeans eyes not with Europe, but with the East until the 19th century.

One of the most famous French guests to the Crimea was Alfred Rambaud (2.07.1842-10.11.1905). That person was well known in Russia, as Rambaud did not hide his sympathies for Russia, devoting many pages to it in his historical works. He did not hide also the fact to be a supporter of rapprochement between Russia and France. His opinion was all the more significant because Alfred Rambaud was not just the Sorbonne historian and professor. For several years he worked at the public service and was a senator and Minister of France Popular Education.

Rambaud was known to the Russian reading public before the revolution mainly because of the widely known multi-volume "Universal History from the IV century BC", which was translated into Russian. Some of the materials published in the French press pages in 1874, telling about Rambaud's impressions after visiting to Sevastopol, have come down to us thanks to the documents published under the Tsarevich Alexander Alexandrovich patronage.

It should be noted that many military events by that time could have obscured the events of the ferocious battle at Russian Troy. However, as Rambaud admitted, that did not happen to the French, much less it could not happen to Russians: "Despite the campaigns in Turkestan, in Syria, in the Caucasus ... such definitions as "Hero of Sevastopol", "Defenders of Sevastopol" having been acquired more and more lofty meaning with each new military action". Rambaud recalls the words of Plutarch, who once said: "The proof that the battle was heroic is the desire of all to be like its participants, as well as the regret for not participating in this battle".

By the Crimean Campaign beginning, the memory of the war with Napoleon have been still fresh, but since 1813, Russia has not seen foreign soldiers on its land. Being a patriot of his fatherland, Rambaud wrote: "In this heroic duel, the glory of the French does not detract from the Russian glory in any way: on the contrary, they nourish each other. The steadfastness of the Russian Tsar soldiers is inextricably linked with our glory, exactly as the ardor and reckless courage of the French infantry exalt the Sevastopol defenders. The memory of Sevastopol is the common and indivisible heritage of the two armies".

Such a view to the past of Alfred Rambaud made him warmly welcome the activities of the throne heir, Great Duke Alexander Alexandrovich, who founded the "The Sevastopol Defense Museum". As a historian, Rambaud could not help appreciating the Russian approach itself to the creation of the museum. During its creation, it was decided not to limit itself to the usual exhibits in such cases like cannons, shrapnel from shells, etc., "but to appeal to the Epic's surviving witnesses", most of whom had already retired by that time, both in France and in Russia. Those people were asked to convey to the Grand Duke their memories, diaries, letters sent to their relatives, and impressions of what they saw on the bastions and bivouacs. At the same time, it was stated those memories were not required to have the perfection of artistic form, and the main thing remained "the sincerity of the presentation, and that no one, even insignificant evidence, would be deprived of attention".

Later, those materials were included in the "Sevastopol Collection", which the public saw in St. Petersburg in 1872-1873. 25 researchers worked on this edition, and to Rambaud's mind, different points of view and assessments of events were taken into account when publishing the documents.

Indeed, many of the most events active participants, such as Menshikov, Gorchakov, Totleben, received different, sometimes directly opposite characteristics and comments. "For some, Menshikov has not managed to foresee the Allied landing in the Crimea, nor strengthen the Russian positions on the Alma by defensive structures, nor even describe the situation truthfully in his reports. For others, on the contrary, he is the savior of Sevastopol: having fought on September 20 in the most unfavorable conditions for himself, from the first day he has given the entire military campaign the spirit of a brave and uncompromising fight". One wrote: "He was the real embodiment of the Russian people, who rose up to defend their Homeland." Another stated that the man "Did not understand the Russian soldier. And the soldier, in turn, did not understand him." According to Rambaud, those contradictions testified to the impartiality of the collection compilers.

The emotional richness of the memories of the Sevastopol defense participants made that unique edition especially attractive and interesting for such a professional history connoisseur as Rambaud. "Someone who wants to imagine the daily life on the bastion, the feelings possessed the city defenders, the moral qualities of Russian officers and soldiers, will definitely got interested in these unsophisticated stories, these letters, initially intended only for their loved ones. Together with the narrators, the reader will visit the locations of the troops on the Almin and Inkerman heights, go to the fortifications under the bomb hail, hide under the shelter for the riflemen, crawl under the reinforcement of the mine road, follow the wounded to the hospital, and accompany the dead to the cemetery of the North Side".

Rambaud was especially highlighting the memories of the French, such as the comments of the soldier Paul Molen or "Military and religious memories about the Crimea" by Father Dumas. It is important for the French historian that these testimonies acquaint readers with life in the French camp. "The shelters of our free riflemen, the trenches filled to the knees with melted snow, the theater of the Zouaves, and the fighting cheerfulness of our vanguard have become closer to us".

We will come back again to our rubric, to the memories of Alfred Rambaud and other Frenchmen about the Crimea, to its amazing history, nature and people.