ALL THOSE CROATIAN PRESIDENTS 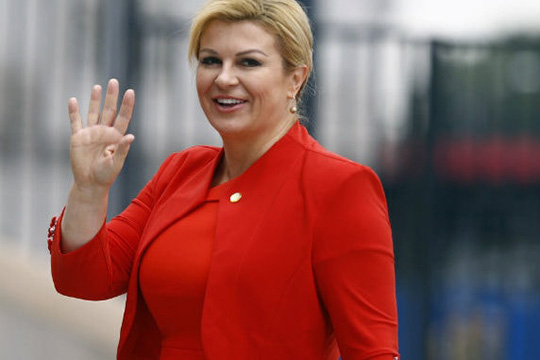 Since those days when it emerged from the ruins of the Yugoslav federation as an independent state, Republic of Croatia had 4 Presidents – 4 men and a Lady President. The first one whom only death, in the opinion of many, saved from the International Hague Tribunal, but who is still (or because of that?) called by his admirers “Father of the Nation” was a self-proclaimed “Messiah”, who although “only” a President acted as master and commander. One of his closest collaborators remembers how Franjo Tudjman asked him once: “To whom should I leave Croatia?” For a monarch without heirs from the 19th century a quite appropriate question. But, for the President of a modern state that found its way to the international scene at the very end of the 20th century – unthinkable!

On the wave of the desire for changes, which grew more and more as dark sides of the war for independence and of the privatization and transition started (but only started) to emerge, Tudjman was after his death succeeded by a former highly positioned politician of his Party who broke all ties both with Tudjman as well as with the Croatian Democratic Union (HDZ), because he could not and would not support their policy towards Bosnia and Herzegovina. Before doing that he, alas, following the official HDZ policy, gave a couple ill-made statements which he found himself in a position of explaining even after years. However, Stjepan Mesić displayed enough honesty and political courage to admit these statements and escapades and to apologize for them, saying they were wrong and out of place. He won the presidential elections twice and although he is by his enemies from the right still branded both as a clown and as a traitor, he initialized key processes aimed at putting Croatia on the world scene again, after it was, at the end of Tudjman’s rule, practically put into international isolation because of his policy towards minorities, especially the Serb one, and to human rights in general.

Mesić opened the way for returning antifascism (although already put into Constitution) to the place it deserves in the Croatian society; without any reservations he labeled fascism and its Croatian version (Ustasha) as evil and as a crime; he opposed the historical revisionism that was present from the very beginnings of the Croatian state;  ha changed the attitude towards minorities, in the first place, the Serb minority and he favored the return to Croatia of those Croatian citizen of Serb origin who fled the country during the war; he laid foundations for a everyday’s normalization of the relations in the region; he opened Croatia to the world, presenting it as a partner willing to cooperate on the terms of full equality with everybody. Despite diminished powers, because Croatia switched after Tudjman’s death from semi-Presidential to parliamentary system, he knew how to resolutely say “no”, when Croatia’s interests were at stake (for example resisting the pressure to make Croatia part of the so called Coalition of willing put together by the US for the purpose of invading Iraq). And he never ceased repeating that he is a citizen-President whose job is not to rule, but to serve.

After his 10 years in office a new tenant came into the Office of the President – university professor and composer, candidate of the left, Ivo Josipovic. There can be no doubt that he too wanted to be a “real President”, that he even had some ideas how to do this (let us forget his statement that he intends to compose an opera, while being President), the fact remains that he – objectively - managed to halt or to freeze many of the positive processes started by his predecessor; though at the same time some of them he simply copied, repeating for example in the Israeli parliament the excuse, on behalf of the Croatian state, for the crimes committed by the Ustasha against Jews. If he is going to be remembered for anything, it will be for being a weak President, who – by not being able to define himself and by not understanding what politics is all about, practically put in the position of the President Kolinda Grabar Kitarovic. Because, apart from the HDZ voting machinery, people did not vote for her, wanting just her as the new President, but because they were, to put it mildly – fed up by Ivo Josipovic. He did not know how to make real contact with citizens (contrary to Mesic, who was a virtuoso in doing this) and the citizens did not understand him – for example when he announced that he will run for the second term with he concept of a new Constitution.

The first woman-President in the short history of Croatia, presented a respectable C/V (minister for European Integration, Foreign minister, ambassador to the US, assistant to the Secretary General of NATO). But, very soon it became apparent and it remained apparent through her 5 years in office that she came totally unprepared and unfit for the position. She was intoxicated by the ceremonial accompanying the position of the President, she was literally in love with the military component of the function (although the President is the Supreme commander only in times of war), she loved uniforms and weapons and, above all – she was obsessed – by moving her Office from one town to the other (together with a ceremonial military unit that was present during the playing of the national anthem and raising the flag upon her arrival; in normal circumstances it is just the President visiting this or that town, or region of Croatia, which was – but without the pomp upon which she so insisted – done by Mesic, by Josipovic, even by Tudjman.

She will be remembered by stubbornly repeating some notorious lies (such as that Croatia/Yugoslavia was behind the Iron Curtain, or that Croats were not allowed in times of Yugoslavia to call themselves as Croats, or that the Ustasha salute (For homeland – ready) was an ancient Croatian salute (here she eventually admitted, most probably under pressure from outside, that she was wrong, blaming one of her advisers for this!). She will not be remembered for her policy, even not for the “3 seas concept” she so loved to speak about, although it is not her concept at all. But she will be remembered as an enthusiastic cheer leader during the World soccer championship, as somebody who embraced sweaty soccer players in their wardrobes and – as her term in office started to come close and closer to its end – as somebody who liked to sing in public (even “discussing” this with some media, objecting that they reported she does not know how to sing, although – she said – “I sing well”). Finally she will be remembered by a series of public appearances which made many people to raise their eyebrows and then to start laughing at her (“My friend, the American general”, or “they say it’s not possible, but I tell you it is possible; I have already arrangements with certain foreign countries that Croats will go there for schooling, return after that to Croatia and work on-line from their homes for 8.000 Euro monthly”, ending with “I will stay in Croatia, although I have offers from all around the world”. She loved to sing a song whose text portrays part of Bosnia and Herzegovina as Croatia, she boasted that the pop-singer, icon of the political right whose most popular song begins with the Ustasha salute “For homeland – ready!” is her favorite singer, and let us stop here, although there would be much more. She missed no opportunity to equates antifascism (calling it communism) with fascism and she loved to remember how both of her grandparents were partisans, but turned into anticommunists right after the victory in 1945. About her being sent to school in the US she said that her father sent her there and not Tito (“forgetting” that Tito was at that time several years dead already).

She made peace with the HDZ prime minister, because she needed her party’s support in the election campaign. All the HDZ politicians started to repeat, as parrots; “She will win!". She lost. If she manages to get into history, than history will remember her as somebody who transformed the role of the President into a stage act and managed, instead of policy that should be waged at the top of the state, to present a rather bad “patriotic” reality show.

It is high time for “realpolitik” to replace this reality show. Yes, we might expect some surprises from the President-elect too, some of them might not please those who voted for him. But, one thing is sure; because of Zoran Milanović nobody who really cares for Croatia and for Croatia’s reputation in the world, will not blush, or feel ashamed (which was not the case in previous 5 years). Milanović in not an “unknown”, both in Croatia and in the world, neither as a person, nor as a politician (chairman of the Social-democratic party, Prime minister). It is a known fact that he too, sometimes, speaks and even acts faster that he thinks, putting himself in the position to explain afterwards what he really wanted to say or demonstrate (the most benign example is his jumping from a APC and falling to the ground before TV cameras, and saying laconically only: “I wanted to boast”.

In retrospect: the first “messianic” President saw himself as the owner of the country and behaved accordingly. The second, and history will one day admit this, was a President, as Presidents should be. The third did not know how to be the President and the fourth, the Lady President, understood and performed her duty as a cheap reality show. One should hope, the time is ripe for a “realpolitiker”, someone who is fully aware of the fact that he is the President of a small country, but at the same time aware of its (meaning his) responsibility for the state of democracy in Croatia, for the situation in the region and for Croatia’s place in the world. Voters do remember Milanovic from previous times. So it is no surprise that on internet one can read such a commentary: “Good luck, don’t slip, because we will not forgive.”

(The author is a long-time journalist, TV and press, nowadays contributing columnist to the Independent Serbian Weekly “Novosti” (Croatia) and to portals novosti.com and tacno.net (Bosnia and Herzegovina). Between 2001. and 2010. he was Foreign Policy Adviser to President Stjepan Mesic).