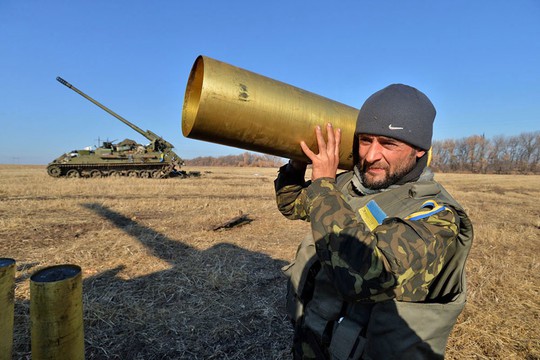 Chargé d'Affaires of the Russian Federation Dmitry Polyanskiy at UN Security Council briefing on Ukraine made a statement. He stressed in particular:

Over the past month, the proxy war of the West against Russia which is being fought “until the last Ukrainian” has escalated to a new spiral. Now that the Ukrainian regime started to receive state-of-the-art multiple rocket launchers that it uses at the prompting and under the supervision of Western instructors, we are approaching a point where Western states get directly involved in the conflict. So called “private” Western companies eagerly provide their satellite images to Kiev to help it plan and launch strikes. Note once have we seen such images being used in all sorts of staged incidents and provocations.

Of course, we cannot fail to take this into account. As for the weapons that are delivered to Kiev and mercenaries that remain on the Ukrainian territory, we will keep striking those as legitimate military targets.

Reckless “pumping up” of Ukraine with weapons, artillery systems, and firearms trigger a situation when, due to flourishing corruption among Ukrainian political and military leadership, those weapons spread throughout Europe.

We know that a considerable part of it goes from warehouses straight into the hands of smugglers and then, via established channels – to the global black market of arms.

Even Europol had to recognize this. Last week its spokesperson Jan Op Gen Oorth said in a comment to DPA that Europol was aware of reports about trade in heavy weapons. He also admitted that European law enforcement had some information about firearms being smuggled out of Ukraine. The spokesperson stressed that there remained risks of those arms falling in the hands of organized crime or terrorists.

The report says that criminal networks are engaged in smuggling “a considerable amount of firearms and ammunition” from Ukraine to the European Union. By Europol’s estimates, weapon stashes have been created along the EU-Ukraine border.

Let me ask our Western colleagues: are you aware of the consequences of your actions? We begin to doubt it. You are creating, with your own hands, a regional if not a global hub for illegal arms trafficking in the very center of Europe. By doing so, you put your population at risk – at the expense of your own taxpayers…

Almost daily, 5-10 people are killed and dozens more injured in Donbas under fire from NATO-supplied long-range artillery. Western and Ukrainian media notice none of this, which however does not make those crimes less atrocious. When supplying Ukraine with long-range artillery, the West becomes an accomplice in the war crimes committed by the Kiev regime.

It is especially heartbreaking when Ukrainian shelling kills children. Donbas has a sad history of burying its children that started eight years ago, the moment Ukraine launched a punitive military operation in this region.

For example a landmine called “Lepestok” (flower petal), which is planted remotely. Ukrainian forces now plant lots of such mines in Donbas with the help of cluster munition. Lepestok is no bigger than your palm, it is very hard to detect on the ground, and looks much like a play toy. When touched or stepped upon, it explodes. It will cripple an adult, and most likely kill a child.

This level of hatred to the people of southern and eastern Ukraine is part of the ideology of Ukrainian nationalism and neo-Nazism.

The world will earn many more shocking facts about those horrible phenomena that Ukraine’s Western sponsors eagerly disregard. This is the result of your blindness.