Already ratified, START is still a matter of dispute to Russia and U.S. 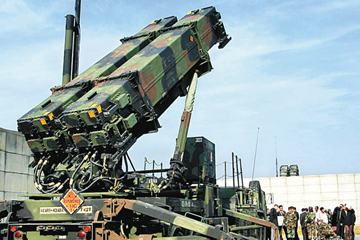 Washington is interested in starting broad discussions with Moscow on further reduction of strategic nuclear arsenals. The announcement was made by Rose Gottemoeller, assistant secretary of state for arms control, as she spoke at the Naval Academy in Annapolis last week. In her speech she made it clear that the U.S. seeks cuts to nuclear weapons stockpiles and solid cooperation with Moscow on anti-missile defense.

First time when Moscow received such message from Washington was in 2001, when the U.S quit the 1972 Anti-Ballistic Missile Treaty. However, as far as strategic security is concerned, Washington does not seem to be honest about its true intentions, and keeps telling Russia that its planned anti-missile shield in Europe poses no threat to Russia and is aimed against the so-called 'rogue states'. The U.S. is particularly interested in the reduction of Russian tactical nuclear weapons...

The U.S. claims that it equally approaches to the reduction of tactical nuclear weapons (TNW) and strategic nuclear weapons. But there is a big difference between these types of weapons and thus approaches should be different as well. Like its was in Soviet times, Russia`s TNW – due to their technical characteristics- pose no threat to the U.S. territories, while the foremost placement of American TNW in Europe is the same thing as if Russia`s security was under threat coming from the strategic weapons.

TNW ceased to be a universal means of defense shortly after John Kennedy`s Flexible Response doctrine came out. Then Washington started using TNW as strategic nuclear weapons and means of deterrence against the Soviet Union and its allies.

When the Cold War was over the U.S. formally abolished the doctrine but still did not seem to have an intention to remove its tactical stockpiles – about 200 B-61 free-fall bombs- from Belgium, Italy, Germany, the Netherlands and Turkey. However, they call on Moscow to remove its TNW from NATO`s borders.

In response, Russia came up with an adequate proposal asking the US to keep its TNW on its territory.

As we see, the U.S. turns a blind eye on the fact that Russia`s TNW are posing no threat to the its security, while that of the U.S. are a matter of concern to Moscow. Washington wants to exchange data, but for what purpose? Apparently, to get access to information that cannot be available to the public.

The question is why the U.S. is so interested in Russian TNW. Barack Obama’s ‘a world without nuclear weapons’ program first saw the light of the day in 2009. President Barack Obama's top national security aide Tom Donilon commented on the issue in an article released by “The Financial Times” last Sunday: “We must address the issue of Russia’s tactical nuclear weapons, which have never been subject to numerical limits.” But Mr. Donilon seems to have forgotten that the U.S. TNWs have never been counted either. As he writes vaguely about the U.S. intention “to reduce the role and number of US tactical nuclear weapons”, the author appears to have a clear understanding of which reciprocal measures Russia should take “to reduce its own tactical forces, and also to relocate these away from Nato’s borders.”

Evidently, Russian strategic nuclear stockpiles is what the U.S. forces are most concerned about. The head of the department of defense and strategic studies at the Missouri State University, Keith Payne, wrote about the issue in National Review. It turned out that most critics of the strategic arms reduction treaty (START) did not like a survey provided by the Russian side which says that the U.S. has to reduce much more of its stockpiles, while Russia will hardly make any at all. Actually, most of Russian missiles have their warranty term expiring long before the treaty itself gets invalid. But what does it have to do with commitments taken by the two countries? The problem is that Washington thinks there is a difference in the way the reduction will be implemented.

Speaking before the Senate on November 18, 2010, Vice Chairman of the Senate Intelligence Committee, Kit Bond, said that the treaty ‘forces the U.S. to reduce its nuclear stockpiles unilaterally’, thus giving Russia a chance to get stronger. Keith Payne shares this opinion. The parity principle which is one of the treaty’s milestones (though the drawbacks of the documents were widely discussed before) and that was set by U.S. senators is no longer recognized.  Their main aim is to make Russia continuously reduce its stockpiles and warheads even if there is no such requirement in the treaty.

That is why Russia should try to observe all limits that were agreed in the treaty but possess enough nuclear weapons needed to ensure national security.

Experts say that Russia needs no less than 1500 warheads to provide an adequate response in case of attack, while in the middle of last year it had 605 missiles with 2,667 warheads. Amid U.S. plans to deploy an anti-missile shield in Europe, Russia also needs TNW to react to potential threats.

Trying to begin a new round of consultations with Russia, the U.S. pursues the same goal- to weaken Russia’s nuclear capacity.

But for Moscow this would be quite a risky thing to do, and Russian authorities seem to be aware of this. Before the START was ratified, Russian Foreign Minister Sergei Lavrov said that nowadays there cannot be only one approach to the problem of international security and strategic weapons. Non-nuclear weapons, as well as space arms race- this also should be taken into consideration when the two countries are discussing their steps towards disarmament.

In view of this, resuming talks on the issue would mean making a step backward.