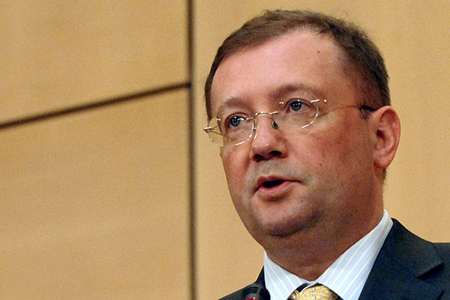 1. Theresa May said today (Thur) that Russia was on the “wrong side of the argument” when it comes to Syria, what is your response to that?

Answer: With all my respect for Prime Minister Theresa May I’ve got to say that the opposite is true. Even former British Ambassador in Damascus Peter Ford (on the BBC the other day) said that there is no moderate opposition alternative to the present government is Syria. That’s why there is urgent need for lasting ceasefire and political process among the Syrians, so that they can decide for themselves. It seems that our Western partners don’t like this approach and want to decide for the Syrians who will take part in the political process and who shall not. I think the reason is they know well what the choice of the Syrians is going to be after the 6 years of civil war.

2. Michael Fallon has accused Russia of being responsible for the chemical attacks by proxy, how do you respond to that?

Answer: We deplore such hostile rhetoric not supported by evidence. The problem is that our American partners tell us that they’ve got compelling evidence of the government forces’ culpability, but they cannot produce it, for it is secret. For them the issue of responsibility is closed. That explains their effort to pass a politicized UN Security Council resolution instead of a straightforward investigation by the OPCW on the site of the chemical incident. Of course, this mission cannot be impartial if it conducts its work in Turkey, with no direct access to the site and evidence.

For us, and Sergey Lavrov said that today in Moscow after meeting his Syrian and Iranian counterparts, this latest incident looks like an attempt to frame the Syrian Government. It reminds us, even by the type of the chemical agent used, the incident in August 2013 in Ghouta, which was supposed to provoke Western military intervention but failed to do so. Now the same stagecraft with the same purpose in mind. It is suspicious that the West wouldn’t even discuss the issue of CW use by opposition/terrorists. Those incidents were widely reported over the past few years. One shouldn’t forget either that the province of Idlib is controlled by the “Al-Nusra”, a UN proscribed terrorist organization, and groups affiliated with it.

3. What do you think about Boris Johnson’s decision not to travel to Russia?

Answer: It was unfortunate. But that is just another indication that there is no bilateral relationship of substance between our two nations, that is beyond mere diplomatic ones. Although Sergey Lavrov is considered to be the world’s Number One diplomat and for the good reason, the recent talks of Rex Tillerson in Moscow show that jousting with Sergey Lavrov at the table isn’t lethal.

4. Is this the worst relations have ever been between UK and Russia?

5. Are you concerned this could lead to World War Three?

Answer: I think the talk of WWIII this time was prompted by the media reports that the US Secretary of State was to deliver an ultimatum in Moscow. Fortunately, it turned out to be a mere suggestion on the part of the Americans. But in history, the very word “ultimatum” is closely associated with a declaration of war. For example, that was what German Ambassador Pourtales did when he met Foreign Minister Sazonov in July 1914. The Russian Minister rejected the German ultimatum and was handed over the Germane Note declaring war on Russia which fast turned into WWI. By the way, F.Pourtales knew what he was doing and bust into tears (S.Sazonov had even to comfort him), leaving both Notes intended for opposite outcomes of his demarche. So, the choice of words is very important, especially for the politicians.

6. What do you think about Britain’s deployment of 800 troops to Estonia?

Answer: We deplore that deployment for it raises tensions in Europe along the border between NATO and Russia. Russia doesn’t pose any threat to Estonia nor any other NATO member-state. That’s why all the talk of territorial defense sounds provocative, and with changing nature of war, outright ridiculous.

7. How would you respond to claims by the Public Administration Committee that Russia may have influenced the EU referendum by hacking the official voter registration website?

Answer: The Russian Government has nothing to do with this hacking if it ever took place at all. I regret to say that over the past few months we have seen various attempts to establish some connection between the June referendum’s outcome and Russia. It looks like Americanization of the issue. It doesn’t take lots of imagination to see that if the hollowing out of the new US presidency succeeds under the “Russian connection” pretext, Brexit will be the next target.