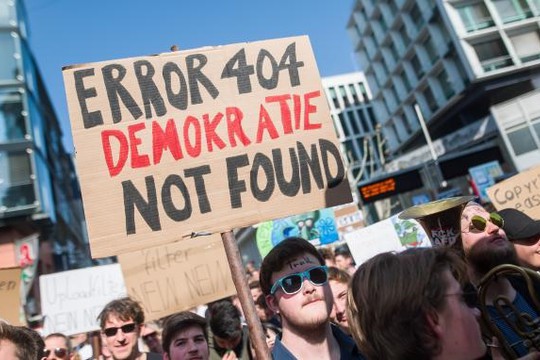 New polling reveals anxieties over the future of the Republic,- exclaims an American liberal publication “Counterpunch”. They felt that many in conservative America were unwilling to follow the path of liberal permissiveness and express their fears by calling conservatives "fascists". This is a clear indication of the split in American society.

The U.S. is not a consolidated fascist republic by any means. But it’s also naïve and dangerous to ignore the overlaps between what’s happening today and under classical fascist regimes from the past, - writes “Counterpunch”.

The latest New York Times-Siena poll provides a window into the bizarre combination of national delusion and anxiety that permeates the United States in an era of rising neofascist politics. It’s becoming more and more difficult for Americans to ignore the intensifying assault on electoral democracy, with the biggest threat being the mainstreaming of Big Lie propaganda that baselessly claims Democrats stole the 2020 election.

Looking at the Times-Siena poll, an incredible 71 percent of Americans recognize that U.S. democracy is “currently under threat.” It’s difficult by looking at this number alone to know what Americans are afraid of. Still, there are serious reasons to be concerned. However flawed this “democracy” is, there are disturbing developments unfolding as we lurch toward the 2024 election.

There’s clear evidence that rising extremism on the American right represents a serious threat to democracy. And yet, there are radically different understandings of what it means to talk about U.S. democracy as under threat, looking at the Times-Siena poll.

84 percent of Democrats say Trump is a ‘major threat’, while just 7 percent of Republicans agree.

55 percent of Republicans think “voting by mail” is a ‘major threat’ to democracy, compared to just 12 percent of Democrats.

On the election more generally, we see polarization as well.

On the one hand, 63 percent of Americans (and 95 percent of Democrats) believe Biden won the 2020 election, while 29 percent believe it was Trump.

On the other hand, nearly two-thirds of Republicans (62 percent) believe the Big Lie that Trump was the legitimate winner.

The Times-Siena poll is disturbing on multiple levels. For one, reading between the lines, it suggests that most Americans are not taking seriously the threat of rising neofascist politics. The poll finds that nearly three-quarters of American voters say that ‘there are serious threats to democracy’.

Yet when asked about their priorities and about what they believe is “the most important problem facing the country today,” only 7 percent cite the “state of democracy.”

We should expect that most Americans would recognize inflation as quite damaging to their purchasing power. And concerns with jobs and the stock market are hardly surprising. But to say that they should take precedence over the potential destruction of democracy reveals the extreme neoliberal myopia of American voters – including most Democrats.

America is a nation of consumers who are immediately focused on satisfying their own economic wants and needs, and who would rather focus on short-term economic challenges that burden their pocketbooks, than on a looming existential threat to the republic “Counterpunch” believes.