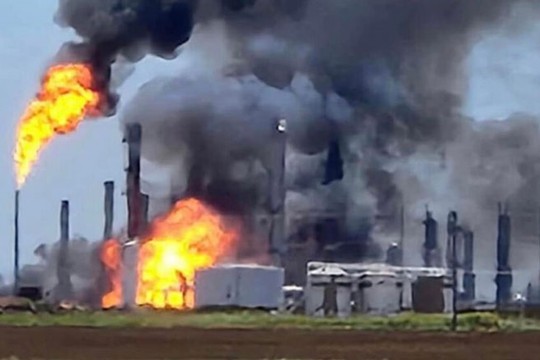 Several fires and explosions have hit the energy industry as the United States is battling a national energy crisis. Four American natural gas facilities have been destroyed by explosions in the space of just a couple of weeks, informs “Slaynews”.

The news comes after a long string of incidents have impact multiple key food production facilities in recent months. An absolutely massive explosion at a very important natural gas facility in Medford, Oklahoma made headlines all over the nation.

The following comes from CBS News: A large fire Saturday afternoon engulfed a natural gas plant in the small northern Oklahoma town of Medford. Video posted to social media showed heavy flames and smoke billowing hundreds of feet into the air. The explosion that caused this fire was so large that it actually registered on the Richter scale.

Just two days earlier, there was another “mysterious explosion” near Houston, Texas. Authorities say a fire is now out after an explosion along a natural gas line sent up a column of flames from a field in Fort Bend County on Thursday. Nearby residents report hearing “a loud pop” when the explosion occurred. There have also been other “suspicious explosions” recently.

There was another unusual fire at a facility in Valdez, Alaska on June 27th. The following is from ADN: A tanker truck that caught fire at a Valdez refinery Monday afternoon halted fuel-loading activities at the facility on Tuesday, state officials say.

This very strange chain of explosions has led to the fact that the ability of the United States to supply liquefied natural gas (LNG) to the world market has decreased. This means that Europe, at least, loses the prospect of buying LNG from the United States in order to compensate for the reduction in gas supplies from Russia.