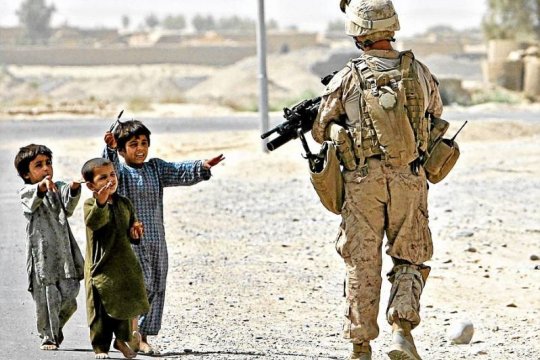 Lo and behold! Looks like the “great and terrible” United States can be scared to the point of hysteria. Another myth about American omnipotence is being debunked before our very eyes now that the big shots in Washington are dreading the prospect of being held accountable for the crimes their soldiers have committed in Afghanistan.

Well, it’s been a long time since the Yankees have last been scared of anyone anywhere, save, perhaps, for Soviet missiles. Still, the challenge they now have thrown out to the International Criminal Court (ICC) has laid bare their cowardice for the whole world to see. And all this under the guise of threats and warlike rhetoric, of course.

Washington saw red when, in November 2016, Foreign Policy journal wrote that “the prosecutor’s office of the International Criminal Court (ICC) is ready to initiate a full investigation of a range of possible war crimes and crimes against humanity in Afghanistan, including some by US personnel.” Washington was incensed even more after the very same publication wrote that “the chief prosecutor, Fatou Bensouda, will seek to initiate an investigation,” and that “the prosecutor’s office repeatedly called attention to alleged abuses of detainees by US personnel between 2003 and 2005 that it believes have not been adequately addressed by the United States.”

The ICC report noted that “crimes were allegedly committed with particular cruelty and in a manner that debased the basic human dignity of the victims.”

Shortly afterwards, US officials visited The Hague where the ICC was meeting to discuss the potential investigation and to express concerns about its scope in what was seen as their first attempt to intimidate the court.

A report by the UN mission in Afghanistan added fuel to the flames of the ICC probe. According to the report, in 2016 alone, 11,418 civilians died there at the hands of all the warring sides, including the Taliban (banned in Russia). Still, the main culprits are US invaders and their NATO allies.

Despite the mounting pressure, the ICC prosecutor Fatou Bensouda of Gambia persisted with the investigation. Washington then ramped up the pressure by simply revoking her entry visa to the United States. Simple as that.

Bensouda’s office said she had an “independent and impartial mandate” under the Rome statute governing the ICC, and described Washington’s move as an attempted attack on the ICC by the US Administration bringing a sigh of relief from “law-abiding” Americans. And no one in the “free and independent” US media raised his voice against this arbitrary practice.

Such voices of disagreement came from the European Union and the United Nations though, with the UN Secretary General’s official spokesperson Stephane Dujarric expressing the hope that “the United States government will continue to comply with its obligations… and that the prosecutor, when she needs to come to the United Nations, will be afforded a visa for work done at the United Nations,” where Fatou Bensouda was to present a report to the Security Council on the progress of ongoing investigations into the events in Libya.

EU foreign policy chief Federica Mogherini likewise backed the ICC: “We will continue to fully and strongly support the ICC and its work,” she said.

It has also been said that Washington’s disregard for the ICC, which comprises 123 countries (excluding Russia and the US), is fraught with an international scandal. However, President Trump will hardly bother to worry about trifles like this. Responding to the start of the investigation into the crimes committed by the Americans in Afghanistan, the US State Department vowed to revoke or deny visas to ICC staff “seeking to investigate alleged war crimes and other abuses committed by US forces in Afghanistan or elsewhere.”

Secretary of State Mike Pompeo threatened “to take additional steps, including economic sanctions, if the ICC does not change its course.”

Washington reserves the same treatment also for the ICC staff investigating alleged crimes by the Israelis in the West Bank and Gaza Strip, and President Trump has confirmed this. Paraphrasing George Orwell, all people are equal before the ICC, but some people are more equal than others.

However, here the Americans’ strength turns into weakness and uncertainty. President Trump’s national security adviser John Bolton threatened prosecutions and financial sanctions against ICC staff, as well as against countries and companies assisting in ICC investigations of US nationals. If this is not a sign of panic, then what is?

However, the mere fact that an official investigation has been launched against the United States is unprecedented in modern-day politics. When even a Gambian national can see that a global superpower is losing strength and is vulnerable, one can only imagine what will happen if everyone else in the world realizes this too.

Fully aware of this prospect, the Americans have applied all levers of political and economic pressure available to them and showed everyone that they are still a power to be reckoned with. On April 12, the ICC  unanimously (sic!) rejected prosecutor Fatou Bensouda’s request to investigate criminal offenses allegedly committed by NATO coalition forces against civilians in Afghanistan on the very dubious grounds that such an investigation at the present time “would not serve the interests of justice."

The ruling states that the prosecutor’s request “establishes a reasonable basis to consider that crimes within the ICC jurisdiction have been committed in Afghanistan and that potential cases would be admissible before the Court.” However, the Chamber noted “the time elapsed since the opening of the preliminary examination in 2006 and the political changing scene in Afghanistan since then, the lack of cooperation that the Prosecutor has received and which is likely to go scarcer should an investigation be authorized hampering the chances of successful investigation and prosecution, as well as the need for the Court to use its resources prioritizing activities that would have better chances to succeed.”

US Secretary of State Mike Pompeo is happy: “I am very pleased that the ICC made this decision today. It is the right one. When Americans misbehave, whether it’s our military, intelligence officers, we have a robust democratic process that holds them accountable. You’ve seen us do that for those that misbehaved. There is in no way or any need for the ICC to intervene,” he said.

This is a striking example of national legislation taking precedence over international law - especially in critical situations.

President Trump was equally pleased hailing the ICC’s refusal to consider the actions of the US military in Afghanistan as "a major international victory not only for these patriots, but for the rule of law (?)”. He reiterated US reservations about the Hague-based ICC, saying that its "broad, unaccountable prosecutorial powers" present a threat to US sovereignty. Which means that Yankees are immune from prosecution – something we should all keep very much in mind.

The whole situation turned out to be pretty ambiguous: the Americans got scared, but the ICC ended up bending under Washington’s pressure. It still looks like the days of America’s complete domination are over, just as the current scandal proved beyond any reasonable doubt.