Americans return to Syria for oil 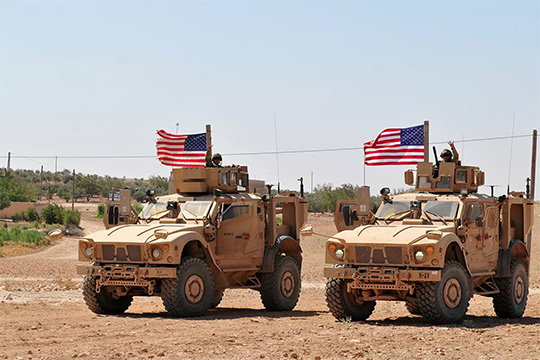 Soon after the adoption of the Russian-Turkish Memorandum on Syria, President Trump, known for his "consistency" in decision-making, made it clear that he had no intention of withdrawing US troops, which had already been moved to Iraq, from the east of Syria. The reason for the US forces to stay on is the need to protect the local oil reserves against the “Islamic State” (which is prohibited in the Russian Federation). The American president even reflected on which company should be contracted to produce Syrian oil, eventually opting for ExxonMobil (who else!).

The Pentagon spoke to this effect as well, in more concrete terms. The oil of northeast Syria will go to the allied Syrian Democratic Forces (SDF), - said US Secretary of Defense Mark Esper, adding: “We want to make sure that the SDF have access to these resources, in order to guard prisons and arm their own units . Our mission is to ensure the safety of the deposits.” When asked by reporters whether Syrian and Russian forces would have access to these resources, Esper answered in the negative. [i] Thus, the United States has yet again demonstrated that they do not deem themselves bound by international law. At the same time, they confirmed the American so-called "businesslike" approach to international problems.

The Russian Foreign Ministry has repeatedly insisted that Syrian oil should belong to the Syrian people. Speaking at a press conference following the recent meeting with Turkish and Iranian counterparts, Sergey Lavrov said: the United States plans to protect Syrian oil from Syria.

Compared to neighbors, Syria is far from an "oil giant." Its developed reserves amount to about 2.5 billion barrels, while Saudi Arabia has reserves of 268 billion, Iran - 158 billion, Iraq - 144 billion, Kuwait - 104 billion, UAE - 98 billion barrels. Oil reserves in Syria are not that abundant for the US to "cling" to them. So what's the matter?

Only a fraction of oil reserves are located on the territory liberated by the Syrian army and its allies, the lion's share of the reserves is controlled by SDF units (and the Americans, of course). By means of depriving Damascus of oil revenues, which made a major source of the country's pre-war budget, Washington hopes to weaken Syria’s resistance. In addition, the United States won’t stop short of supporting the Kurdish state. By “gifting” Syrian oil to their political protégés, the Americans encourage the Kurds to refrain from making an alliance with Damascus and continue to act as a counterweight to Turkey and Russia and play the role of an anti-Iranian bastion.

It’s the Americans themselves who will buy this oil. In all likelihood, they will buy it cheap. “I want to bring our soldiers back home, but I want oil too. I’m a civilian, I don’t understand why the war in Iraq was needed at all. If my people go to Iraq, let them at least keep the oil," - Donald Trump shared his thoughts not so long ago,  criticizing the policies of his predecessors. [ii] Bashar al-Assad responded by describing Trump as "the best American president ever" because he is the most transparent and honest." “He says he wants oil, and that’s absolutely true - it’s  American policy,” -  the Syrian leader concluded. [iii]

Simultaneously, while maintaining control of the oil fields, the Americans continue to “punish” Ankara for its “excessive” independence in international affairs. After all, they are not going to pump stolen oil through Turkey, which is trying hard to become the southern energy hub for Europe.

Furthermore, the majority of oil-bearing regions in Syria are populated by Arabs, rather than Kurds. Peshmerga captured the fields during the struggle against the Islamic State, prohibited in Russia. Now, should the Americans change their minds about the “protection” of the oil reserves, they will use this to “explain” their yet another betrayal to the Kurds.

In all likelihood, there will be no serious armed clashes over Syrian oil. The problem could be solved through reaching a power-sharing agreement between Damascus and the Kurds, which means dividing the powers between the central government and the local authorities. The Constitutional Committee, which is currently in session in Geneva, could play an important role to achieve this but for the fact that neither Ankara nor Damascus wants the Committee to comprise representatives of the SDF - a bloc that de facto controls the north-east of the country. As a result, Hikmat Habib the Executive Committee of the Assembly of Democratic Syria said: the outcomes of the Geneva meeting will not mean anything “for the people of northern and eastern Syria” (Kurds - A.I.). [iv]

However, Damascus and the Syrian Democratic Forces (SDF) have been taking  steps towards each other: after the start of another Turkish military operation, the Kurds allowed Syrian troops to enter the territory under their control, while Damascus proposed that peshmerga should become part of the Syrian army. As it happens, chances to maintain the territorial integrity of the country are there for grabs.