Amnesty International and the War in Ukraine 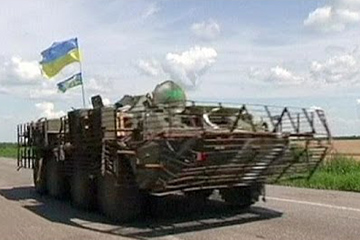 Amnesty International recently released a report on “stomach-turning” violence in Eastern Ukraine (“Abduction and Tortures in Eastern Ukraine,”  – see for example BBC coverage here). According to the report, the acts of violence are perpetrated chiefly by pro-Russian separatist groups.

The Amnesty International report and its conclusion about rebel responsibility for the majority of violence doesn`t hold water and has little in common with reality. The violence in Ukraine in general is not properly analyzed, and report is quite biased. Rather than the rebels, it is the Ukrainian army and the pro-EuroMaidan forces that are responsible for the abductions and abuses.

Firstly, rebels in Eastern Ukraine enjoy almost 100% support of the local population. There is no need for them to commit any kind of violence targeting the locals. The Ukrainian army, on the contrary, is viewed as a cruel enemy and Ukrainian soldiers feel the animosity of the locals. Simple logic would argue that it is the army that has felt the need to repress its local adversaries through violence. Moreover, it suffices to speak with any of the thousands of refugees from Eastern Ukraine and listen to their stories about the barbaric methods used by the army to break the resistance, to be persuaded that the Ukrainian army bears the responsibility for the majority of kidnappings and tortures.

Secondly, it`s well known that EuroMaidan was supported by Ukrainian neo-Nazi organizations. After the success of EuroMaidan its leaders enrolled their neo-Nazi supporters into newly formed police and National Guard battalions (“Azov”, “Donbas” and so on). From time to time foreign media speak of the neo-Nazi background of such Ukrainian military units, but most of the time this fact is hidden. It`s hard to expect any respect for human rights or any other kind of law observance from these soldiers.

The facts show that EuroMaidan authorities started the terror campaign promptly after toppling the former government, that is to say long before the start of the war. The spiral of violence raging now in Eastern Ukraine is the sequel of the geopolitical drama called EuroMaidan.

In addition, to see the whole scale of violence in Ukraine one should gather information about abductions, tortures and other ill-treatment throughout the country and not only in Eastern Ukraine. And the time period should be enlarged: it`s necessary to take into consideration all of the violence perpetrated since the victory of EuroMaidan and not only since the beginning of the hostilities.

When the new post-EuroMaidan government was formed it unleashed unprecedented repressive measures, which became more and more stringent and violent. Policemen and their families were the first targets. They were threatened anonymously, their apartments burnt and some policemen killed.

Not only policemen were tracked down, but any conspicuous person loyal to the previous government. Unacceptable newspapers were forcibly closed, independent journalists arrested. The most radical pro-European movement, “Right Sector,” put forward the idea that “the revolution continues and we will hunt down the enemies of the revolution”. After that civic activists were subjected to brutal attacks and the most active of them were arrested. Now Kiev goes even further. Following the example of the US in Iraq, the Ukrainian authorities are producing playing cards with faces of the rebel commanders as well as faces of “wrong” journalists, for the soldiers in Eastern Ukraine. The army must either arrest or kill them.

After EuroMidan, Ukraine is a country full of political prisoners. The number of well-known journalists and writers who have had to escape from the country is rather high: Alexander Chalenko, Rostislav Ishchenko, Vladimir Rogov, myself, and many others. Even high-ranking Congressmen of the Ukrainian parliament, such as the anti-EuroMaidan politician Oleg Tsarov, have had to leave Ukraine under the threat of arrest. Before fleeing Tsarov was attacked by a crowd of EuroMaidan activists and savagely beaten. The video of the attack as well as Tsarov with torn clothes and bruises was shown on TV.  His house in Dnepropetrovsk was burnt by Molotov cocktails thrown by well-known “unknown” perpetrators.

Now Tsarov gives juridical assistance to police officers and civil activists persecuted by the new authorities. According to Tsarov, many people are being arrested throughout Ukraine and prisons are filled with political prisoners. The latest case has been the arrest of Alexander Samoylov, the vice-rector of International Slavonic University in Charkov. The picture of Samoylov beaten, with black bruises around his eyes, is circulating on the internet.

The violence against ideological rivals has turned into political advertising for the Ukrainian politicians supporting EuroMaidan, aimed toward dissuasion. Congressmen from the well-known xenophobic nationalistic party Svoboda forcibly entered the office of the Ukrainian National TV Channel director, beat him and forced him to resign. They disliked how the TV channel covered the Crimean conflict between Moscow and Kiev.

Notorious congressman and leader of the Radical party Oleg Liashko is famous for his PR actions in the zone of hostilities. He often shows up there accompanied by a large number of bodyguards and demonstrates his attitude towards the population of Eastern Ukraine. There are many videos showing Liashko humiliating his opponents and threatening to kill them — like in this video where Liashko and his bodyguards rudely force a local deputy in Slawiansk to resign and threaten to lynch him in a town square  –  or threatening to throw them into prison, like in this video where Liashko interrogates a 68-year old man with a sack on his head and threatens to keep him in prison until death.

It`s worth mentioning that in March 2014, a month before the beginning of hostilities between Kiev and the rebel provinces, and when dialogue was still possible, Liashko ordered one of the Eastern Ukrainian leaders, Arsen Klinchaev, to be arrested. This was carried out in a rude and humiliating manner and Liashko himself took part in the action. Klinchaev was arrested in his office and not with arms in hand, but was treated like a dangerous terrorist.

Instead of dialogue, Kiev has chosen violence.