An apparition at NATO’s Lisbon summit 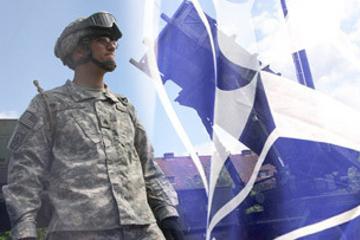 The NATO forces aren’t going anywhere from Afghanistan. They will remain in the Hindu Kush for as long as it takes. Richard Holbrooke, United States Special Representative for AfPak is on record that the Lisbon summit will have on its agenda no exit strategy for Afghanistan but rather a mere “transition” plan. He announced that the US’ combat mission will not end until 2014.

The NATO Secretary-General Anders Fogh Rasmussen was blunt – “there is no alternative to continuing the military operations.” At the hearings at the Foreign Affairs Committee of the British House of Commons on Monday, Foreign Secretary William Hague also asserted that the Taliban needed to be militarily degraded so that they become amenable to negotiations.

The picture that emerges is that “Iraq is a pretty decent blueprint for how to transition in Afghanistan”, as a US official told the New York Times this week.

So, let us comprehend what happened in Iraq. Plainly put, the US fudged the line defining what constitutes a “combat mission”. It seems Obama took abundant precaution last year to rechristen the US’ combat brigades in Iraq and re-label some of them as “advise and assist brigades” so that he could insist on August 31, 2010 with a clear conscience that he fulfilled his promise to terminate the US’ “combat mission” by that date. According to the investigative historian and journalist Gareth Porter, “Six US fully equipped combat brigades remain in Iraq today, contrary to the [US] administration’s official position that only non-combat troops remain there.”

The US has no dearth of reasons to justify why a self-contained combat force of 25-30000 troops needs to remain in Iraq: a) al-Qaeda may regroup in Iraq; b) Arab-Kurdish tensions may erupt in northern Iraq; c) insurgency driven by disgruntled Sunnis may revive; d) Iran may fill the power vacuum; e) current power-sharing deal is too fragile to last, etc.

Two unspoken reasons, perhaps, outweigh all others: a) US has profound interests in Iraq, which is endowed with energy reserves that may outlast most producing countries; and b) control over Mesopotamia is vital to any serious geo-strategy in the Middle East.

Come to think of it, these arguments quintessentially become relevant to Afghanistan and the raison d’etre of the Lisbon summit’s expected to propose an open-ended NATO mission in Afghanistan is certainly not in doubt.

The Afghan President Hamid Karzai realizes it. But he also fears that the NATO decision will be deeply resented by the Afghan people. According to latest western surveys, 83 percent of Afghans desire reconciliation with the Taliban. On Sunday Karzai hit out. He told Washington Post newspaper, “The time has come to reduce military operations. The time has come to reduce the presence of…boots in Afghanistan…to reduce the intrusiveness into the daily Afghan life.”

Shades of Emperor Haile Selassie’s appeal to the League of Nations in 1936! The elected leader of a country seeks vacation of NATO occupation of his country. But NATO arranges a UN mandate, thanks to the US’ clout as the lone superpower, to ignore him and the will of his people. Mussolini will be turning in his grave.

However, at the end of the day, NATO needs a status of forces agreement with Karzai’s government. (So does the US.) A NATO-Afghan agreement was in the works and might still be concluded at the Lisbon summit. Let it remain the summit’s residual mystery.

By this weekend we will know whether Karzai is forced to follow the footsteps of Iraqi Prime Minister Nuri al-Maliki, who can be an “Arab nationalist” or “pro-US” or “pro-Iran” at the same time depending on whom you ask – Moqtada al-Sadr or Americans or Saudis.

The US diplomacy is not to be underestimated. Obama did brilliantly to bring Afghanistan into the fold of US’ “reset” with Russia. Russia’s stance is most critical to the NATO plans for open-ended stay in Central Asia. By making Russia NATO’s “partner”, the US eliminates the prospect of it being tempted to become a “spoiler”, or provide a lifeline to beleaguered Karzai.

Engaging Russia also isolates China, which is notoriously averse to solo acts on the world stage and will fight shy of undertaking an activist role all by itself in Afghanistan. In turn, Collective Security Treaty Oragnization and Shanghai Cooperation Organization have been “defanged”.

Equally, Obama’s “reset” with India has been a masterstroke. He virtually tied Delhi to the apron strings of the NATO strategy in Afghanistan. The Obama visit convinced Delhi that the NATO presence in Afghanistan could be a “win-win” situation. The US decision to remove the restrictions on dual-use technology to India facilitates the latter’s induction incrementally into the American missile defence system, which will sooner or later be deployed in South Asia.

Iran, of course, remains the “rogue” element in the US strategy. For the present, the US has damaged two of Iran’s vital partnerships in the region – Russia and India. Iran-Pakistan relationship is far too complex for the two countries to align over Afghanistan. Iran cannot draw succor from Saudi Arabia, either. Thus, Iran is isolated over Afghanistan and its ability to influence the NATO decisions by leveraging Afghan groups is diminishing. Iran’s best bet today, ironically, is that Karzai remains steadfast against the NATO plan.

All this leaves Karzai in the paradoxical position of having to develop common ground with Pakistan (and Iran). Senior aides to Karzai have had consultations in Tehran. Karzai has invited the Pakistani Prime Minister Yousaf Raza Gillani to visit Kabul. But time is running out.

Indeed, Iran and Pakistan stand to “lose” most if the NATO settles down in Afghanistan. Perhaps, Pakistan has even more to lose than Iran.

All the massive investment in men, materials and finance that Pakistan made and the huge risks it incurred by staking its own stability in the elusive search of gaining “strategic depth” in Afghanistan will evaporated into thin air if the NATO strategy to dictate terms to the Taliban proceed according to plan. The Pakistani military leadership has to take some serious decisions.

How far to align with Karzai (and Iran) in immediate terms? In a longer-term perspective, Pakistan has to decide whether to roll back its ambitious agenda to have a government in Kabul under its control. Pakistan cannot trust its core interests with a government in Kabul that it doesn’t control – restricting India’s role in a future Afghanistan.

From Islamabad’s perspective, Obama has shaken up the regional calculus by proclaiming that the US promotes India’s strategic profile, while it is Pakistan that does the dirty job for the US (and NATO) by killing its own nationals and it is through Pakistan that the NATO ferries the supplies for its Afghan operations.

Historically speaking, the US’ regional diplomacy in South Asia has never worked so ruthlessly. Politics for great powers is about creating wealth. The NATO hopes to assume the role of the protector of the Silk Road that ferries to the world market the multi-trillion dollar mineral wealth locked up in Central Asia and Afghanistan. Pakistan’s curse is that the port head for the Silk Road in the Indian Ocean happens to be Gwadar.

Thus, like Banquo’s ghost in William Shakespeare’s Macbeth, Pakistan will be present in the Lisbon summit – uninvited and invisible to all except the US.