An Epilogue to the Seoul Summit 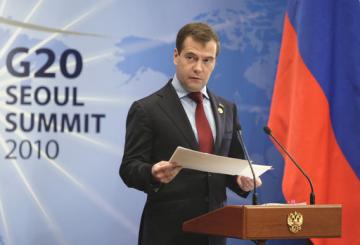 Several days since the Seoul G20 summit, the majority of comments are quite reasonably displaying a total lack of optimism.

The forum passed the Seoul declaration, churned out several other documents, and generated an initiative to establish a global financial security network mostly based on the IMF mechanisms. The summit also reaffirmed the agreement previously reached by the G20 finance ministers and central bank heads to subject the distribution of IMF quotas to an overhaul by 2013 and to hold a new round of negotiations on the issue in 2014.

The Seoul summit ended at a low point, pledges of unity at the face of the global economic downturn notwithstanding. The assembly of global economic heavyweights failed to seal any serious deals in response to the current currency wars and global tide of protectionism. Problems arise due to the simple fact that while everybody wants the world to climb out of the global recession nobody is eager to pick up the bill for the recovery. This is especially true of the US and China, the two countries whose disagreements shaped the Seoul summit's agenda.

Essentially B. Obama's whole Asia tour was aimed at putting together a kind of an anti-Chinese coalition. The US president attempted to exact from Chinese leader Hu Jintao consent to Yuan revaluation and trade balance targets, and thus to put a cap on China's swelling currency reserves, but Beijing was not too open to compromise. Hu Jintao promised a gradual Yuan appreciation, indicated that it should not reach proportions at which it would impede China's development, and did not elaborate on the parameters of the gradualism. Moreover, Beijing returned to Washington the currency manipulation charges in a reference to the recently adopted $600b FRS bond-buying program. Europe also reacted negatively to Washington's risky fiscal policy turn. German finance minister Wolfgang Schäuble warned on the eve of the summit about the potential harm to be caused by Washington's misguided prescriptions. Süddeutsche Zeitung wrote that the FRS decision to additionally inject $600b into the economy provoked fears of inflation and dollar collapse across the world, automatically weakening B. Obama's positions. Former Luxembourg premier and current president of the European Council Jean-Claude Juncker criticized the program as counterproductive.

US Treasury Secretary Timothy Geithner's proposal to “harmonize“ world trade and put an end to competitive currency devaluation by imposing on the G20 countries the requirement to limit trade surpluses to 4% of their respective GDPs drew Berlin's ire. To put the plan into practice, proficit countries – China, Germany, and Japan - would have to adopt structural and fiscal policies stimulating domestic demand rather than export, and deficit countries – to implement austerity and export-boosting programs. Currently China is posting a foreign trade surplus and the US - a foreign trade deficit equal to 4.7% and 3.3% of their GDPs respectively, and the Chinese and German opposition to Geithner's idea is easy to understand. The very fact that the US, a country perpetually espousing lightly regulated market, is pushing for constraints in international trade strengthened the impression that Washington finds itself in a state of confusion. The US economy, being the world's largest, is nevertheless burdened with imbalances - for example, its machine-building sector is no match to Germany's.

The Seoul summit rejected Washington's key proposal, and the common cause – opposition to the US – bred a tendency towards rapprochement between Berlin and Beijing. Hu Jintao remarked that the distribution of recovery benefits across the world was unfair and – much to Berlin's liking - called for abolition of protectionist barriers.

The skeptical tone of media comments appears predictable given all of the above. Le Figaro expressed a widely held view when it wrote that the recent summit of G20, a group bled by the US-Chinese currency war, closed as badly as it opened, producing a colorless resolution which carried no binding measures and would hardly help to get the global economy's ills – currency damping and protectionism – out of the way.

Currency wars, trade barriers, and investments oversight reflect global divisions and fears of a replay of the depression of the 1930ies which had been triggered by the egotism of national elites. In that epoch, national governments resorted to protectionism as a perceived solution and eventually clashed in a global conflict over access to new markets. Following World War II, the world trade volume rebounded to the prewar level only by 1990. These days, a new round of the same history seems increasingly likely.