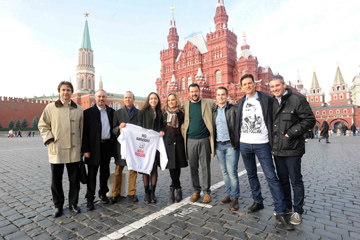 Under the leadership of Party Secretary Matteo Salvini a delegation from the "Lega Nord" (Northern League) visited Russia from the 10th to the 15th of October, visiting the Crimea and Moscow. Apart from MEP Matteo Salvini, the  “Russian Mission” also included other MEP’s: Claudio D'Amico, Paolo Grimoldi, chairman of the Lega Nord in Milan, Alexander Morelli, the President of the Lombardy – Russia Association, and also a representative on the delegation was Gianluca Savoini, and vice president of the of the Lombardy - Russia  Association Gianmatteo Ferrari, representative from the Lombardy-Russia Association Max Ferrari, Stefano Kavikki a photographer from the newspaper "Corriere della Sera" and, finally, the  journalist Eliseo Bertolazo.

The purpose of the visit was to establish relations to reduce the severe consequences of the Russian move in response to Italy approving sanctions against Moscow. These sanctions are already beginning to show a ruinous boomerang effect on the hard pressed Italian economy. The negative impact is due to the fact that there has been a costly reduction in exports to Russia, which has led to a subsequent deterioration of the Italian economy and job losses. Therefore, it seems a timely and equitable wish to be informed about whether or not the implementation of sanctions has brought any benefit to our national interests, which the Italian government is supposed to protect.

Matteo Salvini confirmed the basic idea behind the visit: "Today it is important to build relationships, not only between countries, but also between individual regions and political parties."


Eliseo Bertolazo: “Mr. Salvini, your delegation recently returned from Moscow. How was the visit? Have any there been any early results that we can discuss?”

Matteo Salvini: “The visit was more successful than we could have expected. Our work was aimed at building upon contacts made over the past few months by my official representatives Gianluca Savoini and Claudio D'Amico. The latter, who is already a member of our parliament in the OECD (Organization for Economic Cooperation and Development), gave us a reason to visit Russian soil, and allowed us to meet with important representatives of the Government in the Crimea and Moscow. The culmination was the meeting with the President of the Duma Mr. Naryshkin, thanks to whom we were invited to the Duma during the debates. Then we were presented to the deputies who were present, who applauded us and thanked us for the particular position we had taken in relation to sanctions against Russia.”

“Also memorable was the warm welcome given to us at the Presidential Palace in Simferopol, during a meeting with the Prime Minister of the Crimea Mr. Aksenov, the President of the Crimean parliament Mr. Konstantinov, and Mr. Putin’s Authorized Representative Mr. Belaventsev. The first result of our visit was the signing of an agreement between the Lega Nord party and the United Russia party on cooperation on common issues that will be discussed in all the European institutions, in which both our sides are represented. I was told that we were talking about an unprecedented document drawn up between Russia and some European (not only Italian) parties. Also it was the start of other agreements on matters of major importance, and we will soon see the results of the agreements reached.”

Eliseo Bertolazo: “It is a well known fact that you have already had a meeting with President Putin in Milan. Were discussions held on the theme of "No" to sanctions against Russia?”

Matteo Salvini: “Russia's ambassador to Italy, Sergei Razov, who kindly chatted with us while we awaited the meeting with Mr. Putin, informed us about an intensive three-day trip by the Russian president to Milan for a series of meetings, directly after visiting Belgrade. Immediately after a meeting with Mr. Poroshenko, Mr. Putin wanted to meet with us and drink tea together. Naturally, we talked about the absurd sanctions against Russia, implemented by a timid European Union, not protecting the interests of its own citizens, but the interests of economic oligarchs and the lobbying by the representatives of world power. We also discussed important topics together: such as the protection of national autonomy in the fight against illegal immigration, and the protection of traditional values.”

Eliseo Bertolazo: “It is accepted that the use of sanctions against Russia has also had a boomerang effect against Italian businesses, especially in the north. Do you have any data to hand that would allow us to calculate these losses?”

Matteo Salvini: А result of the sanctions that have already cost Italy 5 billion Euros. As if there was not already a severe economic crisis in the country. Half of these losses have fallen heavily on the shoulders of the production, trade and agricultural sectors of the Lombardy and Venetian regions.”

Eliseo Bertolazo: “Russia has not only become a reliable partner, but in recent years, even a vital one. This is because it has been a guaranteed export market for Italian products and employment in a situation where our country is hard hit by the current economic crisis. We hope that sooner or later someone in the Italian government will decide to explain to us, how in order to protect the vital national interests of the public, we came to the decision to take steps against Russia, which are so overtly harmful to our country. Do you have any ideas as to why these reckless government decisions were taken?”

Matteo Salvini: “This is a government that no one elected. The government, headed by the prime minister, who is only good at talking and meets with Merkel every month, who is in reality the sponsor of the last three Italian governments (Monti, Letta, and at the moment, Renzi). The answer to the question is contained in this fact. These gentlemen are planted in place by certain European authorities and not only by them. They are accountable to them and do what they are told. So, accordingly, they agreed to sanctions against Russia, which are destroying our economy. Of course, someone will win from this, but, unfortunately, this someone will not be the Italians.

Eliseo Bertolazo: “In the motley Italian political panorama, Lega Nord seems to be the only party determined not only in words but also by deeds, to protect our exports to Russia, which means that it cares about our economy and employment. Do you acknowledge that fact?”

Matteo Salvini: “This is proven by simple facts. The only two regions that are part of the official documents against Russian sanctions, not surprisingly, were Lombardy and Venetia, both controlled by the Northern league. The Venetia region has acted even more strongly, given the fact that Luka Dzaya sent the Italian Government an official document condemning the sanctions, approved by the Government of the Venetia region. The Lombardy Regional Council voted for a resolution against sanctions. Have the other regions done anything? No! Has anybody else in Parliament, other than the League, put forward anything in regard to this? No! Can you find any other parties in the European Parliament dressed as we are, in T-shirts bearing the words "No to sanctions against Russia”? Nobody!”

Eliseo Bertolazo: “Let’s turn to geopolitics. Mr. Savoini, the war in Ukraine continues, and as we know, the truce hasn’t happened. Not only has Kiev not broken off from the fighting in Donbass, but the Donbass, in turn, is determined to struggle for complete independence. In your opinion, can a solution be found to this absurd fratricidal war?”

Gianluca Savoini: “It is obvious that only through nerves of steel has Mr. Putin prevented this conflict from erupting into all out war. For many months now, the Ukrainian government has used a tactic of endless provocations against Moscow, "hoping" to get Russian troops to intervene, and thereby provoke a war. This of course, would have dramatic consequences, which could involve NATO, and possibly develop into a wider international conflict. “Cui prodest” (Who would gain from this)? Certainly not Russia or poor Ukraine, which already finds itself a sacrificial lamb on the altar of the interests of global politics, which seeks to weaken Russia and Europe, hindering cooperation and brotherhood between the two territories. This is because the European Union is not a real Europe, but instead it is a clique of techno bureaucrats and international bankers who are pursuing their own interests. They are clearly not interested in the fate of Ukraine. For them Ukraine is just an excuse for the manifestation of their anti-Russian positions. Fortunately, among European citizens there are an increasing number of people who understand this dirty game. The conflict can be only be resolved in one way: the division of Ukraine into two parts of a Federal Union with a high level of autonomy. In the west there would be a Western-oriented Ukraine, which mistakenly sees an opportunity in the EU to resolve its dramatic economic problems. In the east, there are the Ukrainians who disagree with the regime in Kiev, and who wish to side with the Russians, with whom they feel a joint historical, cultural, economic and trade relationship. I see no other way to resolve the conflict.”

Eliseo Bertolazo: “Crimea is Russian now, and Donbass will not surrender. Considering these facts would it not be advisable for Kiev stop trusting the "advice" of those in the West, who only wish to use the Ukraine as a battering ram against Russia?”

Gianluca Savoini: “Winter is coming, and I would say that Ukraine is already feeling the onset of the cold weather. Also, there is a high possibility that Russia will close the gas pipeline to its insolvent client, which already owes Moscow money. Nobody wants to pay in lieu of Ukraine’s bills for gas and heating, neither the EU and especially not the Americans. Ukrainian citizens feel at risk to the effects of unconditional trust in someone who has no intention of taking on Kiev’s financial problems, but who, nevertheless, sponsored the Maidan protest and all that followed it. We hope that the Ukrainians themselves will express a strong distrust of the present leadership, especially since the October elections were farcical, given the fact that the Donbass region did not vote.”