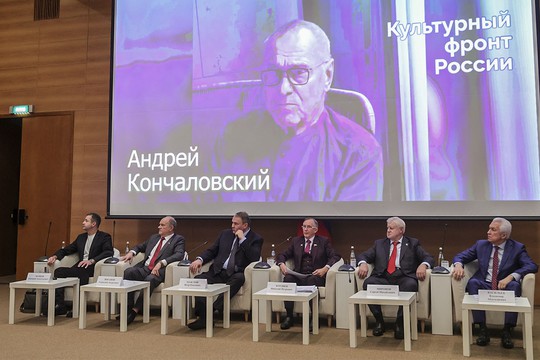 "I think that Russia’s mission is to preserve European culture, and not let it die. Russia is not only an inheritor of Europe’s great culture, but, maybe, today it is its only and main champion," stressed Russian world-renowned film director Andrey Konchalovsky while speaking in Moscow (photo).

"I think that Russia’s mission is to preserve European culture, and not let it die. Russia is not only an inheritor of Europe’s great culture, but, maybe, today it is its only and main champion," he said in a video address to the participants of a roundtable meeting at the Russian State Duma (Parliament House) dedicated to the establishment of the public movement – “Russia’s Cultural Front”.

The prominent director noted that he supports the idea of such a Movement and is set to join it: "Russia will be carrying the flag of European civilization for the world."

World-famous conductor and artistic director of St. Petersburg’s Mariinsky Theater Valery Gergiev voiced support for the idea of establishing such a movement. "Only by becoming united, we, people of culture, can withstand the aggressive intrusion of the alien evil anti-culture," he said.

According to well-known Russian patriotic writer Zakhar Prilepin, Russia is in a situation where cultural institutions are not attuned to share people’s problems and hardships. "They are set up to derive profit this or that way, often thriving on human foibles, entertaining and amusing people," he said, adding that there is demand for a different kind of cultural content in society and added that there are people in the country who are ready to create such content.

Famous musician Yury Bashmet also welcomed the establishment of Russia’s Cultural Front. "It is important, timely and valuable… Russia and Russian culture should preserve their deep roots – we have incredibly strong traditions," he said.

Dmitry Pevstsov, a film and theater actor and a member of the Russian State Duma, also supported the idea of such a Movement. "We need to cultivate new seedlings of contemporary Russian culture and art, which have managed to surface through the concrete of these last 30 years. We must help them, finance them, nourish and cherish them," he stressed.