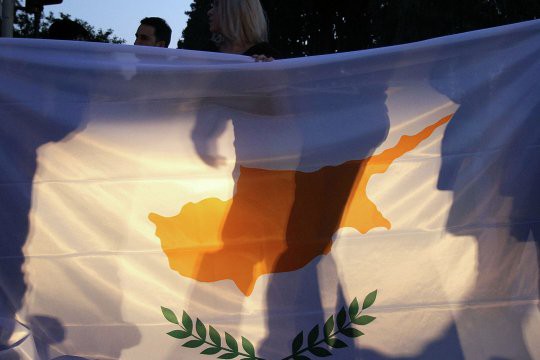 On July 20 a parade was held in Lefkoşa, the capital of the so-called Turkish Republic of Northern Cyprus (TRNC), which marked the anniversary of the landing of Turkish troops in Cyprus (1974). The parade in Lefkoşa (Nicosia in Turkish) was attended by a number of high-level officials who made a number of controversial statements.

Turkey’s President Recep Tayyip Erdogan, who arrived in TRNC on a visit, declared the existence on the island of two states, while Turkish Cypriot leader Ersin Tatar announced that a portion of the Varosha Ditrict would be demilitarized, so the Greek owners’ descendants who sought the assistance of the Turkish-Cypriot authorities would be able to get back to their homes and hotels (incidentally, in addition to Cypriots, property here is still legally owned by residents of about two dozen other countries).

Varosha is a coastal tourist area in the city of Famagusta (Gazimagusa in Turkish), which is adjacent to the “green line”, which separates the “Turkish” territory of Cyrus from the Greek one. After they captured the city, the Turkish occupation forces drove the Greeks out and declared the district a closed zone.

In 1984 and 1992 the UN Security Council adopted resolutions under which Varosa was to remain unpopulated until the return of descendants of the Greek-Cypriot owners and would be handed over to the control of the UN peacekeepers. But despite this, the area is still under Turkish military. Talks between the Greek and Turkish communities on reunification of Cyprus, which were held with the mediation of the UN, were interrupted in 2017.

In 2020 the Turkish-Cypriot authorities “opened” Varosha for tourists, thereby triggering protests not only from Nicosia and Athens, but also from the EU. Back then, the Russian Foreign Ministry found that "Unilateral actions which violate the earlier adopted UN Security Council Resolutions 414, 482, 550, 789 и 2483, create more hurdles for the resumption of talks on Cyprus”.[i]

Neither Ankara, nor Lefkoşa heeded the protests.

As for the July statements by Erdogan and Tatar, they evoked a wave of public outcry in the Republic of Cyprus: Nicosia is still counting on the unification of the country, so it views the appeal to address the illegitimate, in the opinion of Greek Cypriots, authorities for permission to assume the right of inheritance as an attempt to secure the de facto recognition of the TRNC. Sergei Lavrov had to urge his Cypriot counterpart to refrain from “any moves fraught with destabilization of the situation which create more hurdles towards finding a solution to the Cypriot issue within the existing provisions of the international law”.[ii]

The attempt to change the status of Varosha has been condemned by the UN Security Council, the EU, and foreign ministries of many countries. Turkey has dismissed all accusations arguing that “they hinge upon groundless claims and are at odds with the reality”[iii].

Russia’s position on the issue was formulated by President Putin in his reply to the president of the Republic of Cyprus the excerpts from which were published by the Press and Information Agency of Cyprus. President Putin underscores the importance of complying with UN Security Council Resolutions on Famagusta. "The Russian Federation upholds solving the Cyprus issue on the basis of international standards which were set by the decisions of the Security Council and envisage the creation of a two-zone two-community federation”. Russia will continue “to create favorable external conditions for securing progress in settling the Cyprus issue”[iv]. Ankara kept silent, while Lefkoşa for the umpteenth time lamented the fact that the world community will not see “the realities of the island”.

In his interview to Lenta.ru Turkish political analyst Hassan Yunal suggests a plan of how to involve Russia in Cyprus settlement – “from the point of view of Turkey”. According to Professor Yunal, Moscow could “head a movement for the recognition of TRNC”. In return, the Turkish authorities would cease to refer to Crimea as a territory of Ukraine and Turkish air companies would start to fly to the peninsula. Commenting on the proposal, Dmitry Peskov pointed out: “Russian regions never were and will never be the subject of any deals”,  “the much revered professor from Turkey” is hardly presenting the official point of view of Ankara[v]. Nevertheless, the extravagant proposal from the Turkish analyst resembles a covert offer – governments in many counties at times choose to pass their messages to the world via public speaking intellectuals.

On the whole, the developments of late lead to certain conclusions. The victory in Karabakh, the EU’s indecisiveness in relation to frequently risky moves by Turkey, and the unexpectedly soft talks with Joe Biden have inspired the Turkish leader. By ”handing out” property in Varosha on the one hand,  and offering a serious international actor a political bargain on the other, the Turkish authorities are for the umpteenth time attempting to legitimize the TRNC in the eyes of the world community.

Russia has made it clear that it is not ready for “bargaining”, while Turkey finds the UN plan for creating a two-community federation unacceptable. Such a plan would cause substantial damage:   loss of “face”, loss of military bases on the island and of the hope of producing gas in the Mediterranean. A way out of this deadlock would be to legally grant the TRNC the status of “an overseas territory”. How to do that is open to dispute. What could help is the weakening ratings of President Erdogan, which will enable him to go to early elections, while Brussels and Washington will unlikely go farther than imposing token sanctions, since any pressure from the West pushes Turkey eastward. Although, de facto Anschluss of the territory of an EU member may cause yet a more serious response. Russia will not play along with Turkey on that. Whatever the case, Ankara (and not only Ankara) ought to remember that Russian regions never were and will never be the subject of any deals.