Another way to make the world a better place 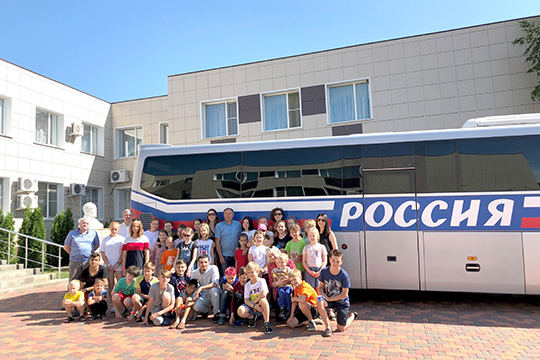 Georgy Chicherin is one of Russia's outstanding diplomats. As Commissar for Foreign Affairs in the Soviet government, he made a significant diplomatic contribution to bringing our country out of international isolation. It is also important to note that Georgy Chicherin took part in the preparation of the first issues of the journal “International Affairs”. Streets, schools, libraries are named after him, as well as an orphan home located in the village “Karaul” in the Tambov region, which is regularly visited by representatives of the Russian Foreign Ministry.

In early June 2019, representatives of the Community of the Russian diplomats' wives and the Children's Musical Theater «City of Masters» visited the orphan home. The wives of Russian diplomats continued the tradition of expanding the fruit garden. The culmination of the whole trip was a festive evening. Actors of the Children's Musical Theater “City of Masters” performed the play “Funny Stories”, and the children of the orphan home presented a concert consisting of funny scenes, dance and vocal performances. The actors invited their new friends to Moscow for a gala concert dedicated to the 30th anniversary of the theater. The beginning of friendship is laid!

Despite the fact that the program was intense, and the children were very tired, everyone was delighted with what was happening. Nobody wanted to leave. “My daughter came to me with her friends, and several times they tearfully asked to stay for at least another day. I couldn't even imagine such a thing,” said Arina Filatova, a representative of the Community of the Russian diplomats' wives.

The director of the orphan home, Viktor Zakharov, invited the theater “City of Masters” to come here next year and live in the camp, which is located next to the orphan home. Arina Filatova noted that the children accepted this invitation with enthusiasm.

According to Christina Nestoyanova, the founder of the Community, the wives of Russian diplomats will continue to interact with the orphan home sponsored by the Russian Foreign Ministry.