Arab League As An Anti-Arab Weapon 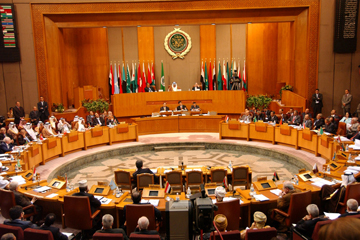 Elementary arithmetic routinely holds keys to much more complex political algebra. At the moment, for example, it appears that fairly simple regards explain the bizarre conduct of the Arab League which, contrary to reasonable expectations, alligned itself with the West in destabilizing Syria and keeping B. Assad under pressure.

It became clear immediately when protests erupted in Syria in March, 2011 that Washington would welcome serious arguments in favor of Assad's ouster. The unrest in the country came as a predictable – and by no means the last - phase in the sequence of revolts inspired by the US and other countries in Tunisia, Egypt, Libya, and Bahrain with the aim of tailoring the maps of North Africa and the Middle East to the liking of global heavyweights. Later on, the slogan of regime change in the name of “democracy” similarly popped up in Algeria, Jordan, Morocco, and Oman.

It did not evade watchers that mass protests in Syria began in the southern city of Daraa and mostly took place on Fridays, at the Muslims' post-prayer time. Due to the clearcut tendency, Syria's brewing revolt was even dubbed “the Friday Revolution”. The unrest quickly spilled from Daraa to other Syrian cities, with the protesters' agenda – the abolition of the state of emergency law and the uprooting of the decades-old regime – borrowed with minimal adjustments from the Tahrir Square. Unlike Mubarak in Egypt, Syria's Assad lifted the state of emergency right away, but the protesters evidently had much more far-reaching goals in mind.

Syria, it must be noted, was among the founders of the Arab League: on October 7, 1944, the protocol of intentions with a pledge to create the organization was penned in Alexandria by representatives of Syria, Oultrejordain, Iraq, Lebanon, and Egypt. The list of the Arab League's stated objectives included political coordination and mutual assistance in maintaining sovereignty among its members. In line with the above, in 1948 the Syrian Army fought in the Arab-Israeli war which the Arab League declared on the Jewish state nurtured by Great Britain.

It is common knowledge that the relations between Arabs and Israel dominate the entire realm of Middle Eastern politics. They could still be perceived as a background theme in Europe or the US, but in fact Washington and the European capitals have made it the cornerstone of their strategy to skilfully capitalize on the region's enduring conflict.

From its birth date and on, Israel plays the role of the West's – mostly, Washington's – political instrument applied to fracture the Arab world. The pan-Arab unification in the Middle East proved to be a short-living process: Syria and Egypt merged within the United Arab Republic on February 22, 1958, with Egypt's Gamal Abdel Nasser as president and a number of Syrians holding key posts, but the marriage fell apart three years later under pressure from the US secret diplomacy. Israel's occupation of the Golan Heights became a reality six years later. In 1973, Syria, in concert with other Arab countries, started the Ramadan (alternatively, Yom Kippur) War in which the situations at the Syrian and Egyptian segments of the front differed beyond comparison. Israel suffered a considerable death toll in the ferocious Quneitra fight occasionally referred to as Syria's Stalingrad, but the Golan Heights remained under Israeli control even after 1974, when UN peacekeepers were deployed to the region and a demilitarized zone was established.

Inspired by the UN inability to reverse the occupation, in 1981 Israel passed a piece of legislation proclaiming its sovereignty over the Golan Heights. The same year the US Security Council annulled the annexation in a special resolution, and the UN General Assembly reiterated the point in 2008, but to no avail. As of today, the Golan Heights are an economically prosperous region in Israel which is practically free of unemployment and outputs over 50% of Israel's mineral water, around 25% of wines, and up to 50% of certain types of fruits and produce. Mild climate and historical landmarks attract a steady flow of tourists to the region which also supplies a third of Israel's potable water. That should, in particular, explain Israel's hate for Iran which has always been backing Syria.

President Assad was re-elected in Syria for another seven-year term slightly under four years ago, garnering 97.62% of the vote in a referendum. The pertinent question is: why Assad who is evidently popular in Syria is figure totally unacceptable to the Arabs at the helm in the Arab League? The Arab League lauded the West's new onslaught on the Middle East and volunteered a blessing to unspecified “peacekeeping forces” that would be dispatched to Syria to dislodge Assad. Who, under the scenario, would take his place? Either the Arab League is moving too fast while the Western intelligence services are unprepared to offer a candidate or those leave it entirely to the Arab League to dispose of Assad. “I don't see the way forward in Syria as being Western boots on the ground in any form, including in any peacekeeping form. I think they would need to come from other countries, rather than Western nations. Of course, if such a concept can be made viable, we will be supporting it in all the usual ways”, said  British foreign secretary William Hague. Paris seems similarly unsure, considering that French foreign ministry spokesman Bernard Valero was quoted as expressing “strong support for the Syrian opposition” and approving the decision to appoint a "special envoy" from the Arab League for Syria, but stopped short of mentioning an intervention under the peacekeeping flag.

Indeed, from any independent perspective the Arab League's initiative to have third-party forces sent to Syria to induce the transfer of power in the country from the legitimate authority to the opposition should read as inviting an intervention. This is, by the way, how things are seen from Damascus. A statement released by the Syrian government said the people of Syria hoped that the Arab League's secretary general and Arab countries' ministers would condemn the blasts in Damascus and Aleppo and call for stopping the instigations campaign or the financial support of terrorists in Syria. The statement also made it clear that the Arab League's meddling in the Syrian domestic affairs was indicative of an anti-Syrian conspiracy and would not make the Syrian government abandon the efforts to restore stability and security in the country.

Unlike the Arab League, Damascus has no chance to get heard in the West. Considering that Syria was among the founders of the League, it would be interesting to get an idea from whose name the group might be speaking under current circumstances.

This is the point at which simple arithmetics should come into play. The Arab League is a motley assortment of 22 countries. It counts on board Qatar, the world's champion in terms of the per capita GDP drawing over 50% of it and 70% of the national budget from the oil and gas export. Qatar's top oil and LNG clients are Japan, South Korea, and Singapore, and all of them being US political allies. Kuwait, another Arab League country, holds 9% of the global oil reserves, owes around 95% of its budget revenues to the oil export, and ranks 7th in the world in per capita GDP. Kuwait's list of buyers is more or less the same as above: Japan, South Korea, Taiwan, the US, and Singapore. In Algeria, oil and gas export accounts for 60% of the budget revenues. The export is mainly absorbed by the US, Italy, Spain, France, the Netherlands, and Canada. The core businesses of the United Arab Emirates are fuel re-export plus the sales of crude and natural gas. The country extracts 2.2 bpd of oil which mostly goes to Japan. The key trade partners of Morocco are Spain, France, the US, Belgium, and Italy. Overall, the biggest Arab League economies thrive on oil and, by virtue of energy export, depend entirely on the West and its oriental allies. It is an easy guess that the Arab interests do not top the priorities lists of those who sit on such energy riches. At the same time, countries like Mauritania, where the per capita GDP measures 185th on the global scale, most of the foodstuffs come from France, the Netherlands, Spain, Belgium, and the US, and 40% of the population are struggling below the poverty level, or Somalia, which survives on piracy and semi-nomadic cattle-breeding, naturally have almost no say in the Arab League's affairs. The survey gives a perfect picture of how easily Washington can direct the Arab League and use it as an anti-Arab weapon.