A.S. Griboedov: “I want to be Russian” 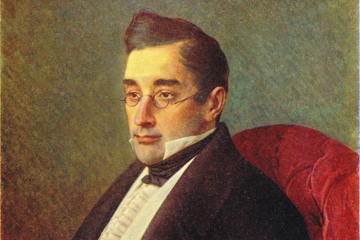 “Never in my life there has been any experience to meet, in any nation, a person, who might so ardently and passionately love his motherland, as Griboedov loved Russia”, - Faddey Bulgarin spoke of his friend, whose activities enormously influenced the development of the Russian culture. Later on the author of immortal comedy “The Mischief of Being Clever” will say: “The more educated a person is, the more useful he is to his motherland”.  Precisely the ardent patriotic feeling for Russia went with Aleksandr Sergueevich Griboedov during all the dynamic and turbulent life of “one of the most intelligent persons of Russia” of the nineteenth century, as it was expressed by A.S. Pushkin.

Griboedov began to study very young. Already in the twelfth year of his life Aleksandr Sergueevich enters the Moscow University.  After graduating from the literary faculty of the philosophic department Griboedov was given the grade of candidate of literary science. He continues to study at the juridical faculty and gets the second diploma of candidate of law.

In student years Griboedov distinguished himself by extreme breadth of his scientific interests. The young man paid great attention to studying literature, philosophy, political economy, history and law. It’s worth to point out, that Aleksandr Sergueevich mastered basic European and Oriental languages.

In Moscow University Griboedov closes with many future Decembrists, such as V. Raevsky, P. Chaadaev, A. Yakubovich and others, who thereafter became members of secret political societies. P. Chaadaev, who smit the future writer with free-thinking, greatly influenced the spiritual development of the author of “The Mischief of Being Clever”. Mikhail Zhikharev, Chaadaev’s biographer, singles out “the amity and close shortness, which established between Griboedov and Chaadaev since student years.

During Griboedov’s studies at the university among Moscow young people there spread liberatory ideas, full with sincere patriotism. Decembrist Nikita Muraviev pointed out: “In 1812 I did not have another pattern of thoughts, than ardent love for my motherland”. Exactly this landmark year for Russia roused big upsurge of Griboedov’s enthusiasm. Feeling inspired, Aleksandr Sergueevich considered, that “love for motherland and people’s combative spirit in defense of  political being are the basis of state’s power and stability”.

Griboedov did not have a chance to participate in military operations, but the young officer was greatly impressed with narrations about the great battle at Borodino, “the people’s battling” near Leipzig and others. In the letter to his friend S.N.  Beguechev Griboedov writes, that in his soul he got a feeling of “love for the good” and began “to cherish … everything, what are parts of true beauty of the soul”.

Just in that period of his life Giriboedov writes his first literary works. In summer of 1814 he acted as a military writer-publicist with “The Letter to the Editor from Brest-Litovsk” concerning officer festivities, then with the article “About Cavalry Reserves”, in which Griboedov marks the importance of the rear reserves system, that greatly influenced the Russian military campaigns  of 1812 and 1814.

At that time Aleksandr Sergueevich felt acute dissatisfaction with his own activities. The rank of functionary, insignificant literary works – all this was far from Griboedov’s high intentions. “His ardent soul demanded activity, his intellect – mental food, but neither the place, nor the circumstances could satisfy his desires”, - one of  Griboedov’s close friends wrote about him.

Finally, after certain hesitations Aleksandr Sergueevich leaves for Persia as secretary of the Russian diplomatic mission. In Iran Griboedov was deeply impressed by despotism and arbitraries: “… this ladder of blind servitude and blind

power… - the young diplomat wrote as thus in his diary. Precisely in Iran the idea to limit autocratic power with constitution began to take shape in Griboedov’s mind.

In 1821 – 1822 during his diplomatic trip Griboedov writes first two acts of his famous comedy, the hearer of which was V.M. Kukhelbeker, A.S. Pushkin’s Lyceum friend. Judging by Griboedov’s diary notes, the plot of “The Mischief of Being Clever” occurred to the writer as early as 1816, before his trip to Iran. In the course of following years Griboedov grinds away at his comic works, revising the plot, adding and crossing out certain characters, observing language peculiarities, rhyme easiness and harmony.   Denying genre features of classicism, Aleksandr Sergueevich created “The Mischief of Being Clever”, building on reality, and demanded the works conformity with “the life”: “Never mind the dreams… now whatever book one look into…in all of them there are present dreams, and no title of the life”.

“The Mischief of Being Clever” became a combination of public satire and psychological drama. It took some time that Aleksandr Serguevich’s innovative genre methods are accepted in literature society, however such cultural luminaries, as A.S. Pushkin, completely acknowledged Griboedov’s right to independently establish dramaturgic laws for his works.

The appearance of Griboedov’s comedy influenced the further development of genre of realism in the Russian literature. “The Mischief of Being Clever” turned to real necessities of the national life.

Griboedov’s comedy is, first of all, a reflection of patriotic thoughts about Russia’s destinies, about ways of forming, renovating and rebuilding its life: “…literature is people’s thought about the beautiful…”

Petersburg, where he turns out to be among Decembrists. For them comedy “The Mischief of Being Clever” was an artistic generalization of their intentions, a reflection of the events in Russia and the Western Europe, developing the Decembrist movement. Griboedov spoke of his acquaintance with leading members of the Decembrist uprising: “In their conversations one can often see a bold opinion regarding the government and I myself took part in them: I condemned the things which seemed harmful and wished the better”.  By the better Griboedov implied the abolition of serfdom and called himself “a tsar’s enemy”. “He is our man”, - Ryleev spoke of him, but the latter did not ultimately admit Aleksandr Sergueevich to the secret society, since he “did not want to expose a man of such talent to danger”.

Later on Griboedov decided to continue his diplomatic activities. In summer of 1826 Aleksandr Sergueevich goes to Tiflis.

During the war between Russia and Iran Griboedov’s diplomatic activities broadly spread. Studying the public sentiment in Persia, he won several shahs of Iranian states to Russia’s side, rendering by this a great favour to the Russian army. Alekcandr Sergueevich made an enormous contribution to the conclusion of the Turkmanchai Treaty. As editor, he wrote some important clarifications to the text of the peace treaty which made it much more advantageous for Russia. Griboedov was entrusted to take the text of Turkmanchai treaty from Persia to Saint-Petersburg.

Possessing deep and inquisitive powers of mind, persistence, great will power and assuredness in reaching his goals, Griboedov war a unique figure at the diplomatic arena. The breadth of his political knowledge made Aleksandr Sergueevich one of the greatest diplomats of his times. The aspiration to be useful to his motherland ans his wish “…to be Russian” were the main ideas of Griboedov’s life, who devoted himself to the Russian diplomacy and Russian literature.

2.     A.M. Bazhenov “To the Mistery “The Mischief”. A.S.Griboedov and his immortal comedy”, edition of the Moscow university, 2011

4.     Yu.V. Mann “The Mischief of Being Clever” by Griboedov: loose strokes to the genre picture”, editorial house of the State humanitarian university, 2005