“Asharq Al-Awsat”: Africa as a struggle arena for influence between the Great Powers 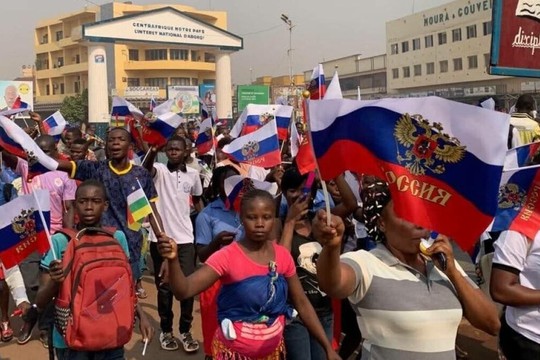 A demonstration in Africa in support of Russia

This is a very interesting "double opinion" from an Arab newspaper from Britain. «Once again, Africa is emerging as an arena for the struggle for influence between the great powers, represented by the United States of America, Russia and China, through visits by officials of the three countries to the continent, in search of support and to maintain influence in light of the intensification of international conflicts under the so-called “new cold war”», writes “Asharq Al-Awsat”, the world’s pan-Arab daily newspaper, launched in London.

In the context of the struggle for influence, US Secretary of State Anthony Blinken began on Sunday an African tour that includes South Africa, the Democratic Republic of the Congo and Rwanda, in a move described as an attempt to “intensify American diplomatic activity on the continent”, as it coincides with the visit of the US ambassador to the United Nations.

The struggle for influence in the African continent is not new, according to Dr. Attia Al-Esawy, an expert on African affairs, who explained in statements that “the Russian-Ukrainian crisis and the Taiwan crisis were like a match that ignited the conflict between the western and eastern camps over Africa.” He pointed out that the causes of the conflict are summed up in "Africa being a source of raw materials, in addition to being a large market for the export of various products."

Al-Issawi says that “America and France do not want China and Russia to be unique in Africa. The conflict is permanent and continuous, even if it fades in periods, then returns to the fore again according to the interests of the US administration.”

Blinken's visit coincides with the announcement of a new strategy on the African continent,  in which it said that "the new strategy aims to revive American engagement throughout the continent, and focus on diplomacy and development rather than militarization".

But Cameron Hudson, an expert on US-African relations at the Center for Strategic and International Studies, says in comments published by "Foreign Policy", that "it should be recognized that there is special competition with China in Africa, and that Washington is often on the losing side."

Al-Isawy says, that “China enjoys a strong influence in all the countries of the continent, because it does not show a desire to impose political influence, and does not set political conditions for cooperation as the United States of America does. From here, we find Beijing present in all countries, even those that are subject to Western influence such as Angola, which has a US military base.”

As for Russia, its presence on the continent depends on historical relations and its participation in supporting liberation movements from colonialism, so its influence expands in a large number of African countries, especially Zimbabwe, Angola, South Africa, Central Africa, Nigeria, and even Ethiopia, especially in the wake of tense relations between Addis Ababa and Washington…

Washington is likely to take additional action in its favor – a US-Africa summit to be held in Washington later this year.