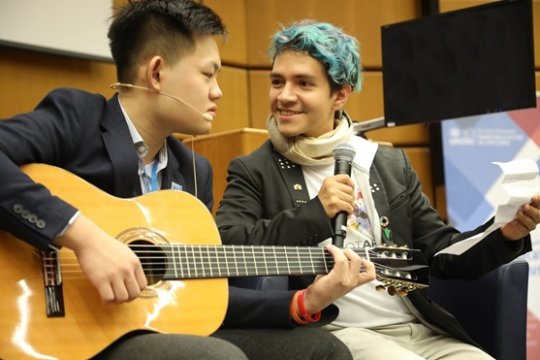 As a 16-year-old high school student in Taiwan, I’ve struggled to find opportunities to make an impact on international issues. Like many passionate students who are involved in Global Affairs and Model UN, I’ve always tried to take initiative and seek out opportunities that can promote youth action for a greater cause. With this drive, I decided to commit myself to the UNODC E4J’s “Educating for the Rule of Law” project when I saw the competition poster on the UNODC website. 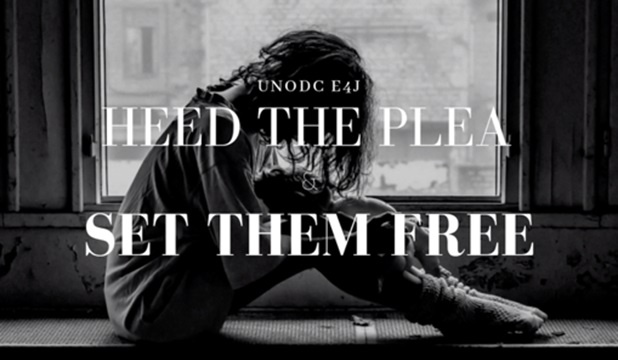 When I was five, my grandfather’s Filipina caregiver, Aher, told me stories about her friends who were victims of human trafficking in Southeast Asia. As I grew older, with more access to resources and information from the internet, I began to dive into the details and history of the matter. After my grandfather passed, Aher also left the house and went to work for someone else, where, I found out, she faced maltreatment and abuse from the homeowner. Since the incident, I had the urge to work in the social justice and the law enforcement field. Now that I am a student, I can contribute to a wider audience through my art.

With a focus on Sustainable Development Goal 16 (Peace, Justice and Strong Institution), I decided to dedicate my song to human trafficking and the smuggling of migrants because of those very stories told by Aher. The entire process took me roughly four months in total. Every detail, from writing the lyrics, coming up with the melody and guitar chords with my peers, recording the song, adding instrumentals and beats, gathering video clips, editing video clips, and blending in the music to producing an awareness music video was worth the hard work. The result came as a shock. I couldn’t imagine out of the 1,200 submissions around the world, I was selected. I was in disbelief when I woke up that morning and saw the notification on my phone: Invitation to the UNODC E4J High-Level Conference. Over the next few weeks, I rehearsed over and over again with my guitar and background track to make sure that my performance would be flawless.

Using my prior knowledge in music composition, international affairs, and public performance, I was able to successfully engage with the audience, maintaining my posture, and effectively delivering a speech about my motivation behind the creation of “Heed The Plea, and Set Them Free.”As I wandered around the conference room, I took the initiative and spoke with numerous experts in different fields, gathering a stack of business cards, making long-lasting connections, and witnessing real-time professional operations inside the UN. I could feel a door had been opened.

Mr. Yury Fedotov, Chief Director of the UNODC, tweeted a group picture of himself, me, and the other E4J winners with compliments and words of encouragement for all the effort that the youth have contributed towards promoting the culture of lawfulness. Meeting all the other winners of the contest was amazing as we shared our experiences and talked about our process of hard work. A teenager from the Philippines, who was the winner in the tertiary level, produced a short film about violence with an unforgettable use of emotion and film technique, connecting to the real-world issue of terrorism.The most phenomenal presentation of youth effort in fighting for the rule of law, however, came from a 14-year-old Nigerian girl who delivered a moving call-to-action to stand up for the rule of law, receiving a standing ovation from the crowd. 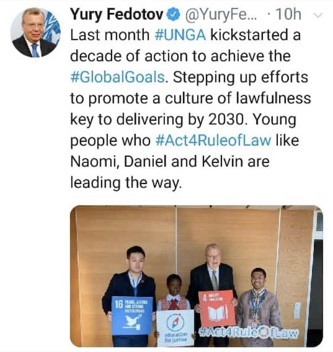 Although I told myself it was just like the many times performing for my band at school, I wasn’t able to manage my emotions standing on the stage in front of diplomats, organization CEOs, and educators. Stagefright was hitting me like I was in elementary school again. This live performance, however, was not like any music performance at the courtyard or auditorium. This was a pivotal turning point in my life, presenting myself as a representative of a youth movement on an international platform. This performance was proof for every youth who has ever doubted they could impact global issues, and, more importantly, proof for everyone to witness youths’ ability to make a difference in this world and to use art as a medium to influence people.

On day two, I had the honor of presenting my song, along with three other #Create4Justice artists, and discuss how various forms of artistic expression can be utilized to promote the rule of law. Along with three other panelists, I introduced my music as a medium to promote justice in an engaging way. I was deeply intrigued by how different manifestations of the arts can bring about awareness and change. Mr. Andrew Newman, a close friend and colleague, talked about the power of journalism and journalists’ efforts to show the world the “truth” behind world issues through the camera lens. An Italian architect and artist talked about how transforming old houses into colorful artworks helps with crime prevention and overall community wellness. 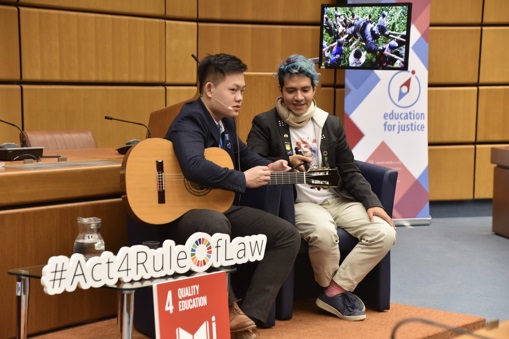 The one artist that I talked with the most and still stay in touch with to work on song collaborations was Mr. Leonardo Parrága from Colombia. Our common robust interest in Reggaeton music created a new hashtag,#ReggaetonPorJusticia (R4J) with the purpose of reaching Spanish-speaking audiences, addressing issues relevant to justice and law in South America, and transforming the provocative image of reggaeton-type music. In addition, the head of the UNODC Doha Declaration Global Programme, Mr. Marco Teixeira, showed a strong interest in Reggaeton and expressed a willingness to help with my song creations. Even more encouragement came from Dr. Sofija Bajrektarevic, Director-General of the fascinating Vienna-based platform ‘Culture for Peace – Unifying potentials for the Future’. She suggested series of programs to be organised under her vision of bridging the generational gap through ‘Tomorrow’s People’ Board.

An Album Is Born

I am ambitious. I started with one song, and now I want to kickstart a whole album consisting of 17 songs that showcase different styles of music, are written in a plethora of foreign languages, and appropriately represent each and every one of the UN Global Goals. My original idea was to convey a unique story through the medium of music with a visual (video) accompaniment. However, it wasn’t as easy as I thought. It took me four months to finish producing my human trafficking song, “Heed The Plea and Set Them Free.” I couldn’t imagine the amount of time it would take for me to achieve this dream on my own. So I thought,why not feature different artists around the world, let them tell their own stories, and write their own lyrics in the languages closest to their hearts?

With the help of MUN Impact, I was able to launch my music project—The SDG Album, which involves youth from all over the world, creating songs about various global goal targets in the local language of their respective regions. Through all the hard work from MUN Impact, the outreach team, Mr. Andrew Newman, Ms. Lisa Martin, and the UNODC Education 4 Justice team, the album is now receiving submissions on a rolling basis. A winner, selected for demonstrating the most influential and effective idea through their song, will win a trip to MUN Impact Morocco in June! 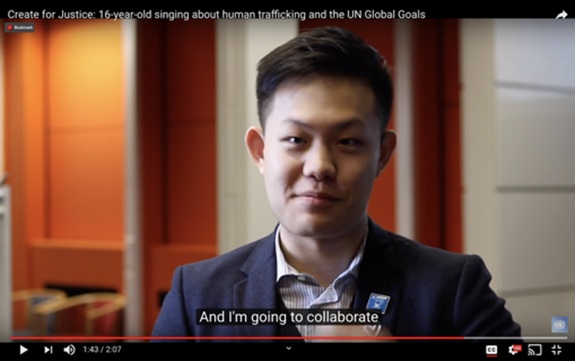 During the High-level conference’s first break, UNODC conference press Ryan Haidarian decided to interview me about my motives behind my song and my vision after this once in a lifetime experience. I had the honor to have this video featuring me shared across UN social media platforms such as Twitter and Facebook.

This event has helped me come to the realization that young people do have the power to make an impact on this world. The reality is, we, the youth, may not have as many resources, connections, or some would even say, maturity to handle the pressure. What we do have, however, is the most impact when it comes to advocacy because people will think, “If a 16-year-old can do it, I can do it too.” From a middle school student miserably figuring out how Model UN works and how to overcome a paralysing fear of public speaking to an advocate for the SDGs, trying to change the world with his voice and guitar, I have grown. After the conference, it feels strange to receive messages and tweets from UN officials and high-level diplomats complimenting my work and effort in promoting the rule of law. I can’t believe the profound changes a UN conference could bring to a teenager. From the media attention from Twitter and new insights about the United Nations to connections with people from educational institutions, UN agencies, and people with the same musical passion as me, leading to collaboration projects on song-productions on UN Global Goal topics, I can finally tell my friends from Model UN… I made it to the UN!

Daniel Hsuan is a Taiwan-born performer and conceptualist. His pop-art performances are already turning him into a world star and possibly a future UN Goodwill Ambassador.