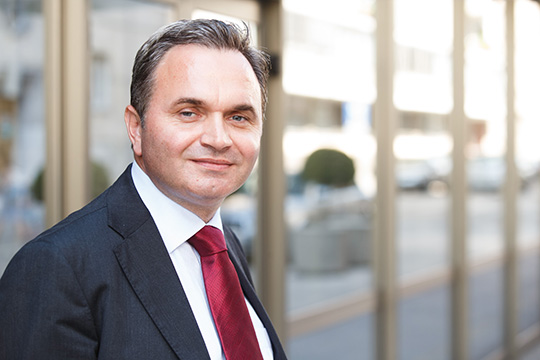 1) Would You tell us about Your institute in more detail? Some sources call it the most influential (or the most seen) institute of the Balkans. (We would like to know what it specializes in; What activities it is involved in; What does the Institute's special consultative status signifies; What projects associated with that consultative status of IFIMES at ECOSOS/UN are already under way and which are the forthcoming.)

Dr. Zijad Bećirović: We are the only institute in the world with a name that contains the words Middle East and Balkans. Influence is not a static category, you have to fight for it and, above everything, it requires hard work of the entire IFIMES team.  Our creed is „social positions are never gifted, they are won“.

Within ECOSOC/UN, the key problem of the countries in the Middle East and Balkans is economic recovery and sustainable development. Additionally, both regions are burdened with a recent history of war crimes and mass casualties. It is required to develop a memorial culture to prevent history from repeating itself, while being future-oriented at the same time. Those are the great challenges for which adequate approaches, solutions that could be implemented, are hard to find due to many heterogeneous actors on the political stages of the Middle East and Balkans as well as key international players.

We will be paying special attention to the European perspectives, that is to say, the EU future. As you may know, we publish the international scientific journal European Perspectives and we wish to position that journal globally. Ergo, IFIMES is on both, a practical and theoretical side. Possibly the biggest challenge in the Middle East and Balkans is finding an optimal ratio between national, religious and modern.

2) In Your opinion, what are the most pressing problems the Balkan Region is currently confronted with?

Dr. Zijad Bećirović: The key problem in the Balkans is the phenomenon of „politicization of crime and criminalization of politics“. There is a lot of trust between the political and criminal structures, and that trust needs to be disrupted between them, and not via an external factor. Once that mutual trust has been disrupted, it will be possible to expect a more serious fight against crime and corruption. It is due to those very structures that we have „captured states” – a whole society as a hostage. The process of liberating the „captured state” will enable progress and a renaissance of the Balkan states. An additional problem is posed by the fact that this crime has an transboundary dimensions.

3) In October 2019, leaders of Hungary, Slovakia, Croatia and Slovenia, while meeting at the NATO headquarters, signed a Memorandum of Understanding on the creation of a regional command of special task forces. What do these countries expect from such MoU?

Dr. Zijad Bećirović: It is in fact a fragmentation of NATO. The same way the EU is fragmented, with several groups in existence, such as the Visegrád Group. Within the EU, but also NATO, all the countries are formally equal but they are not equally valued. Otherwise, we probably would not see this type of fragmentation.

4) What are the chances for the Balkan countries (in particular, North Macedonia, Bosnia and Herzegovina, Serbia) to join NATO?

Dr. Zijad Bećirović: It is every country’s sovereign right to decide on joining any association or alliance.  It appears that North Macedonia will become the 30th full-fledged NATO member state in January 2020.  Bosnia and Herzegovina is committed to Euro-Atlantic integrations by virtue of the Dayton Agreement itself. This was later formalized in appropriate legislation – that the strategic goal of BiH is to join the EU and NATO.

Serbia insists on its military neutrality.  However, military neutrality cannot be a unilateral act of a country. Ensuring military neutrality is much more complex than that, and is more difficult to achieve, especially given current global relations. I would like to remind you that Serbia was the last one, and with a “heavy heart” at that, to enter the South Slavic creation called Yugoslavia, but hence was the very last to leave it. This analogy is highly symbolic in the Balkans, perhaps even in relation to NATO.

5) How do You estimate the prospects for Serbia, Montenegro, BiH, North Macedonia, Albania or even Kosovo to become members of the European Union? What consequences could this lead to? Will this affect relations with Russia?

Dr. Zijad Bećirović: The strategic goal of all those countries is EU membership.  The situation with EU membership is not entirely clear. The EU is facing its own problems, although it’s trying to present as a problem and/or a threat 18 million people, which is the total population of the countries of the Western Balkans, compared to almost 500 million people who live in EU member countries. This has led to a situation where some of the countries are perhaps even ready to change their future geopolitical orientation due to the reluctance on the part of the EU to accept them as members.

Ever and ever again new conditionalities are placed before countries of the Western Balkans. The rules are changed mid-game. At this point, a significant number of EU member states would not be able to meet most of the conditions that are today demanded from Western Balkan countries. That is unfair and cynical towards those countries.

A historic injustice and mistake was done by the EU when they recently failed to set the date for the commencement of negotiations with the EU for North Macedonia and Albania. That mistake might yet come at a high price for the EU, at least when it comes to the Western Balkans.

Russia is an important country and people are aware of that in the Balkans, where Slavic population is in majority. It seems to me that when Russia (over)emphasizes Christian Orthodoxy and Orthodox identity it in fact neglects other Slavic peoples and countries, which makes its public diplomacy less successful.

The religious component (as self-restraining and self-hindering for Russia), which is so important in these societies, should not be in the focus of bilateral relations and efforts to build partner relations among the nations, which are quite heterogeneous in terms of their worldviews.

Building relations that are based upon a single worldview may be disastrous in politics.

6) You are in daily touch with the leaders from the region. In your Institute’s Board and executive structures, you have many former high-ranking officials. Which kind of Russia the Balkans and Middle East need?

Dr. Zijad Bećirović: Russia has many positive attributes to show, and it does not do it often enough.  The triumph over fascism in World War II, when over 20 million Soviets died, is not in the focus, and we need antifascism now more than ever.

Within the Institute we have experienced people whose advice, recommendations, suggestions and opinions are invaluable to our efforts to make this world a better and more prosperous place. Antifascism remains a key building block in it, and Russia has historically played pivotal role in this civilizing and humanizing struggle.

7) Some commentators are claiming that the rhetoric is high but real people to  people (P2P) exchanges between Russia and the Balkans are at the historic low. Do we really know each other?

Dr. Zijad Bećirović: That was the very theme of my previous answers.  It is expected of Russia to offer a different policy and public diplomacy to the Balkans. The current ones are not addressed to everyone. They are fragmented, which is why the results of Russian politics in the Balkans are fragmented too.

We need to get to know each other thoroughly better. That is the only possible way to slowly dispel the existing fears.

We in IFIMES are ready for any constructive engagements. We remain available for cooperation and for improvement of those relations – be it headed by the top diplomats, or substantiated by people-to people exchanges.

8) On October 25, 2019, a free trade agreement was signed between Serbia and the EAEU. What are Serbia’s expectations of cooperation with the EAEU? Will Serbia enjoy any benefits of such cooperation?

Dr. Zijad Bećirović: The problem of the Western Balkan countries, and therefore Serbia’s problem too, is that most of those countries used to have better economic indicators prior to the dissolution of SFR Yugoslavia than now. For example, Croatia, which is an EU and NATO member country, scored a higher GDP in 1979 than in 2015.

9) On April 25, 2012, the Russian-Serbian Humanitarian Center (RSHC) was set up in Nis. Are there any plans to launch similar projects in humanitarian and cultural sphere between Russia and countries of the Balkan Region?

Dr. Zijad Bećirović: The countries of the region face numerous problems.  Those problems most certainly include rescue and protection of people and property from natural disasters and other humanitarian issues.

The introduction of EU sanctions towards Russia has caused discord within the EU itself. Some of the countries, such as Hungary, openly opposed Brussels’ policy towards Moscow. On the other side we have countries like Croatia, which has been developing its relations with Russia in directs disproportion to the declining EU-Russia relations.

Croatia has a 1,777 km-long coastline (without islands), or over 6,000 km with islands, frequent fires during tourist season, as well as other humanitarian challenges and threats, and a center like that one certainly would be of use. Based on expert assessments, the best suited location would be the Zemunik airport near Zadar.

Most certainly, there is no European security without Russia and experts have been repeatedly pointing that out.

10) We thank you very much for your time, frank and open talk.

Dr. Zijad Bećirović: My pleasure. Let us meet again before too long in Slovenia.