At the bidding of the West, Nazism is becoming a political norm, just like it did in the 1930s 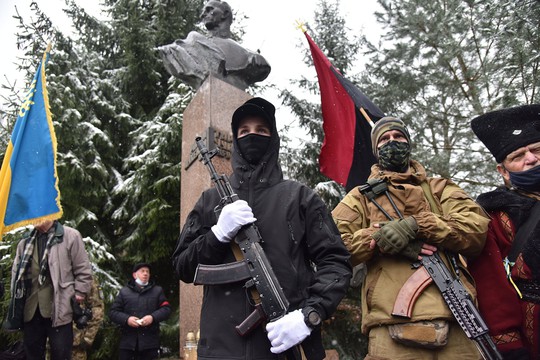 We must not let anyone steal the greatest day in the 20th century’s history!

Seventy-seven years ago, on May 9, 1945, the ruling circles of the West found themselves in a difficult moral fix. The Soviet Union, which the West had been working so hard to demonize, turned out to be the savior of the world from Nazism. A hard and indisputable fact. According to a May 1945 poll, 57 percent of those in France acknowledged the Soviet Union’s decisive role in the routing of Nazism. For comparison’s sake, in 2004, 58 percent of the French named the United States the main defeater of Nazism. The US propaganda machine worked well in Europe.

Moral inconveniences for the West in the wake of the German surrender also stemmed from the fact, that since the 1930s the Western ruling circles had been investing heavily in the Nazi regime. In 1932, the governor of the Bank of England, Montagu Norman, and the Dulles brothers had a secret meeting with Adolf Hitler, which resulted in their decision to finance the NSDAP and to lend money to the German Reichsbank. Even after the outbreak of World War II, American companies continued to operate in Germany and supply fuel and lubricants to the Reich via Spain.

In 1938, during their meeting in Munich, Great Britain and France, with the moral support of the United States, allowed Germany, Poland and Hungary to carve up Czechoslovakia. The Western leaders were openly hopeful that the Soviet Union would be the next victim of the territorial division. They proved terribly wrong though. The Soviet people defeated Nazism and vanquished the Nazi invaders. The enormous international prestige earned by the Soviet Union made it one of the five founding powers of the United Nations and a permanent member of the Security Council.

Today, the great victory won by our grandfathers is haunting the descendants of those who financed Hitler, set the Third Reich against the USSR, served the invaders in punitive units. The widespread demolition of monuments associated with the Great Patriotic War in Ukraine and in the formerly socialist Eastern European countries serves a striking evidence of modern-day vandalism. During the past few weeks, the destruction of monuments has taken on the character of a wholesale epidemic.

In Poland, a local crowd cheered as a monument to Red Army soldiers was being demolished at the site where 620 Soviet warriors of the First Ukrainian Front had sacrificed their lives liberating Poland from Nazi occupation.

In Germany, the leadership of the CDU party demanded the demolition of a monument to Nazi-tortured communist Ernst Thaelmann.

In Transcarpathian Mukachevo, a monument featuring a T-34 tank, erected in memory of the liberators of Ukraine from Nazism, was torn down, along with an obelisk once put up in honor of the soldiers who died in the Great Patriotic War.

In the city of Stryi, Lvov region, a stele to a Soviet soldier was destroyed.

In Ternopol, a stele commemorating Soviet pilots was likewise torn down.

In Zdolbunov, Rovno region, a monument to the Hero of the Soviet Union, intelligence agent Nikolai Kuznetsov, was demolished.

In Rovno, the names of the heroes of the Great Patriotic War were knocked down from the stele erected in their memory.

In Kharkov, representatives of the Nazi Azov Regiment, banned in Russia, demolished the monument to Soviet Marshal Georgy Zhukov.

In Zaporozhye, a monument to Soviet pilots – a Lavochkin 5 fighter plane, which fought in the Great Patriotic War, was destroyed.

In the village of Dovge (Transcarpathian region), a monument to partisan scout Valya Kotik was barbarously dismantled.

In Chernigov, they tore down a monument to Zoya Kosmodemyanskaya by throwing a noose around her neck.

Meanwhile, according to Ukrainian sociological surveys, only 19 percent of respondents openly support the demolition of monuments in Kiev-controlled territories, while 36 percent don’t care and 40 percent people protest (in their hearts) against such barbarism.

Over the past few years, the number of Ukrainian residents who positively assess the personality of Stepan Bandera and the role of the OUN-UPA* has increased dramatically. And the myths about “ancient Ukraine,” propagated by a program, approved by the Ministry of Education, are being instilled in the minds of children, right from kindergarten-age and older.

“The destruction in Ukraine of monuments related to the victory in the Great Patriotic War and its victims is not the Ukrainian authorities’ own idea. It was sent down to them by their Western curators,” the WarDonbass telegram channel writes.

At the bidding of the West, Nazism is becoming a political norm, just like it did in the 1930s.