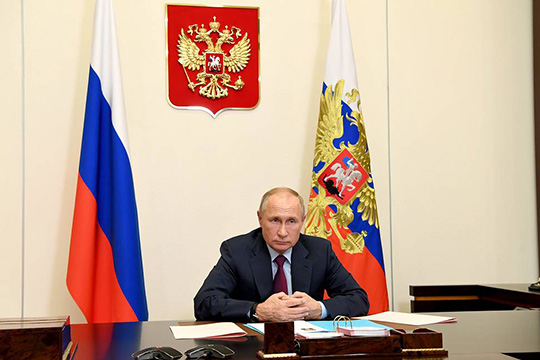 According to the Russian president, the decisions passed by the military tribunals back in 1946 remain a reliable foundation for a constructive dialogue and cooperation to this day.

Attempts to undermine the principles based on the conclusions of the Nuremberg trials threaten global security, Russian President Vladimir Putin said in his address to the participants of the Lessons of Nuremberg forum on Friday. Among the delegates of the Forum there are experts from European countries, who came to Russia under the Rossotrudnichestvo program "New Generation".

The Russian leader said that it is a duty of the entire global community to guard the decisions of the Nuremberg trials, noting that "these are the principles that underlie the values of the post-war world order and the norms of the international law."

"To this day they remain a firm reliable foundation for a constructive dialogue and cooperation, whilst forgetting and attempting to undermine them is a blow to ensuring security on the entire planet," Putin said, noting that this is precisely the reason "Russia persistently raises these questions at all negotiation platforms."

"We constantly turn to the lessons of the Nuremberg trials, understanding their importance for the assertion of historical truth, in order to counteract the intentional distortions and falsifications of the events of the Second World War in a conclusive and well-founded way, especially the unscrupulous dishonest attempts to justify and even glorify Nazi criminals and their accomplices," the Russian president stressed.

Putin expressed hope that this forum will contribute to the modern interpretation of the historical heritage of the Nuremberg trials, while the results and the recommendations by the forum participants will be relevant for the global community.

Conclusions drawn at the Nuremberg trials 75 years ago are still relevant today, Vladimir Putin said. "The Nuremberg conclusions continue to be relevant today," the Russian leader emphasized. He reiterated that a month ago, based on the tribunals' decisions, the Soltsy district court for the first time ever in the Russian legal procedure recognized as genocide mass executions of civilians near the village of Zhestyanaya Gorka in the Novgorod Region where thousands of innocent people were brutally murdered.

Putin also thanked all the forum participants. "I am confident that the subject matter of the forum is meaningful to you not just because of your professional activities but also because you realize your personal responsibility to preserve the historical truth about the Second World War, profoundly comprehending the significance of the conclusions of the Nuremberg trials and the norms and principles developed there for finding the answers to the most complex modern challenges and threats," he said.

The Russian president reiterated that 75 years ago, after the overwhelming defeat of the Nazi regime, "a court process [began] that held the attention of the entire world." "The merciless Hitler's regime that unleashed a criminal war, that committed monstrous atrocities history has never known, was overthrown but it was impossible to stop there. The triumphant military victory had to be followed up by a political, legal and moral condemnation of Nazism and its deadly ideology."

The role and losses of the Soviet Union

The Russian president noted that certain individuals, the leadership of the Nazi Germany, were behind the mass terror and the determined extermination of entire nations. The countries affected by the aggression and millions of people who endured inhuman trials and suffering hoped for a vindication and the inevitable public punishment of the Nazi criminals. "It is precisely this position - to create an open international military tribunal - that was championed by the Soviet Union beginning as early as 1942 and consistently maintained at all negotiations with the Allies, among whom, as it is known, initially the idea prevailed of a non-judicial, only a collective political decision of execution of the Nazi leaders," Putin emphasized.

By the end of the war, he continued, the necessity to conduct precisely a legal process was realized by many leading politicians, and in August 1945, the Soviet Union, the US, Great Britain and France approved an agreement on its establishment. This agreement was supported by 19 other countries. "The tribunal rightfully earned the status of the Court of the people," Putin added.

The Soviet people who bore the brunt of the most powerful and violent attacks by the aggressor, had their own scores to settle with the Nazis "for those killed on battlefields, for the wounded and crippled, for destroyed cities and burned villages and for mass murders of people on the occupied territories," the president said. "Those atrocities directed at peaceful Soviet people were dictated by the special Nazi directives and acquired the status of Hitler’s state policy. The Soviet Union in the Second World War suffered enormous irreparable losses. Among millions of victims the majority were servicemen killed in captivity and mercilessly murdered civilians," he noted.

According to the head of state, declassification of the archive documents in Russia and the work of search expeditions help "uncover and reflect again on previously unknown yet horrible events of the past war and on the new facts of mass murder of Soviet citizens - the elderly, women and children - by the Nazis and their accomplices."

"Such crimes do not have a statute of limitations," Putin asserted. "They were evaluated precisely by the Nuremberg trials, that developed the criteria of a crime against humanity, which defined the very notion of genocide and laid the foundation for the UN Genocide Convention approved in 1948," he added.