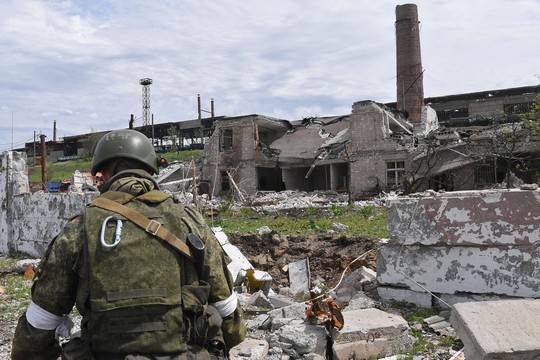 1. Azovstal plant is under full control by the Russian and Donbass troops

The 27 km long underground facilities of the enterprise, where the militants had been hiding for nearly one month, have come under full control of the Russian Armed Forces and Donbass troops.

Since May 16 till May 20th, a total of 2,439 Azov Nazis and AFU servicemen blocked inside the plant have laid down their arms and unconditionally surrendered during the operation. All of them are arrested and will get a fair trial.

The so-called ‘commander’ of the Azov Nazis, due to the hatred of Mariupol residents and the desire of the townspeople to massacre him for his numerous atrocities, was removed from the territory of the plant in a special armoured vehicle.

The detained Azov nationalist faction members lamented that they have betrayed by the rulers entrenched in Kiev who neglected their poor conditions at the Azovstal plant and offered no assistance to them.

2. Situation on the battlefield

Armed Forces of Ukraine continue to shell residential areas in Donbass not controlled by Kiev. Each day several civilians are killed and wounded in that region, and many houses and social infrastructure are deliberately destroyed.

In total, during the period from February 17 to May 17, at least 147 people were killed and over 580 civilians were wounded in the territories of the DPR and LPR as a result of the actions of Ukrainian armed formations. There are many children among the victims. Data on the dead and wounded are being clarified, their number, unfortunately, is steadily increasing during the verification and confirmation of reports.

On the other hand, during May 21 and 22, high-precision air-based missiles have hit 3 command posts, 13 areas of Ukrainian manpower and military equipment concentration, as well as 4 ammunition depots near Soledar, Sol' in Donetsk People's Republic and Nyrkovo in Lugansk People's Republic.

Russian air defence means have shot down another Su-25 aircraft of the Ukrainian Air Force near Novoaleksandrovka, Kherson Region.

The attacks have resulted in the elimination of more than 210 nationalists and up to 38 armoured and motor vehicles.

Donetsk People's Republic: in Bakhmut on the territory of school No. 2, in Chasov Yar in the building of professional school No. 77, in Novoekonomicheskoe in kindergarten Solnyshko and school No. 1, fighters of Ukrainian armed formations have equipped strongholds and placed military equipment and MLRS launchers in the surrounding area. However, the evacuation of the local population from nearby houses has not been possible.

E.g., in Nikolaev, units of the Ukrainian Armed Forces deployed artillery guns and multiple rocket launchers in the building of Zvezdochka kindergarten No 141 and on the territory of the shipbuilding lyceum.

In Putivl, Sumy Region, Ukrainian nationalists have equipped a stronghold in Lyceum No 2 and an after-school centre, while locals are being held in basements under the pretext of ensuring their safety.

These facts once again show the Kiev regime's complete disregard for all norms of morality and international humanitarian law. At the same time, the USA and European Union countries continue to cynically "turn a blind eye" to the numerous war crimes committed by the Ukrainian authorities, which are not discussed at the state level in Western countries, objective materials in the media sphere are sporadic and any accusations against official Kiev, including in the media, are strictly banned.

In addition, in Nikolaevka, Lugansk People's Republic, the Kiev regime carried out another sophisticated action to discredit the Russian Armed Forces before the world community. During the provocation, militants of nationalist battalions and AFU servicemen fired artillery shells at residential buildings, killing and injuring civilians. The New York Times journalists and Ukrainian journalists accompanying the nationalists filmed the strikes and their aftermath allegedly carried out by Russian units.

Such actions by the Ukrainian authorities once again demonstrate their total indifference to the fate of Ukrainian civilians.

Despite all the difficulties and obstacles imposed by the Ukrainian side, over the past day, without the participation of Kiev, 18,873 people were evacuated from dangerous areas, 2,282 of them children, and in total, since the beginning of the special military operation, 1,396,798 people have already been evacuated to Russia, of which 234,762 are children.

Over the past 24 hours ,Russia received 109 requests from foreign and Ukrainian citizens to evacuate to Russia, the Donetsk and Lugansk people's republics, as well as to the Russian Armed Forces-controlled areas of Zaporozhye, Nikolaev, Kharkov and Kherson regions. In total there are 2,756,228 such appeals from 2,136 locations in Ukraine in the database.

Since March 2nd till May 21st, totally 21,580.4 tons of humanitarian aid has already been delivered to Ukraine, 1,039 humanitarian actions have been carried out, including 8 actions in Kherson, Zaparozhye and Kharkov regions, as well as in Donetsk and Lugansk People's Republics, during which 326 tons of basic necessities, medicines and food were transferred to the civilian population of the liberated areas. On May 21, 5 humanitarian actions have been planned and are currently being carried out in Kharkov and Zaporozye regions, in Donetsk People's Republics, during which 290 tons of basic necessities, medicine and food will be distributed.

5. The situation at the Black Sea

Still for many days and nights 75 foreign vessels from 17 countries remain blocked at 7 Ukrainian ports by Ukrainian authorities, namely in Kherson, Nikolaev, Chernomorsk, Ochakov, Odessa, and Yuzhniy. Mariupol port is blocked by many Ukrainian naval mines set up near it.

The threat of shelling and high mine danger created by official Kiev in its internal waters and territorial sea prevents foreign vessels from safely leaving the ports and reaching the open sea. At the same time, the Kiev authorities continue to avoid engaging with representatives of states and ship-owning companies to resolve the issue of ensuring the safe passage of foreign vessels to the assembly area.

In confirmation of this, the Russian Federation is opening daily from 08:00 to 19:00 (Moscow time) a humanitarian “blue water” corridor, which is a safe lane south-west of Ukraine's territorial sea, 80 nautical miles long and 3 nautical miles wide. Detailed information in English and Russian on the modus operandi of the maritime humanitarian corridor is broadcast daily every 15 minutes on VHF radio on 14 and 16 international channels in English and Russian. The danger to navigation from Ukrainian mines drifting off their anchors along the coasts of Black Sea states remains.

Demining detachments of the Russian Armed Forces and the EMERCOM of Russia are carrying out land and facility clearance tasks in the territory of the Donetsk and Lugansk People's Republics. A total of 1,620.09 hectares were checked, including 76.17 hectares, 35 buildings (including 13 socially important facilities), 1 bridge and 9.64 km of roads during the day. 9,255 explosives were detected and defused, 1,629 of them during the day.

When withdrawing from their positions, AFU mined the territories of Donbass with anti-personnel mines, including those prohibited by international agreements. In particular, the fact is related to high-explosive mines of pressure action PMN-2. In addition, warehouses with mines of the MON-50 and MON-90 type, abandoned by Ukrainian nationalists during the retreat, have been identified in Mariupol.

The Kiev regime regularly, from year to year, deceived the international community and the OSCE that it allegedly faithfully fulfills its obligations under the 1997 Convention on the Prohibition of Anti-personnel Mines (Ottawa Convention), that it destroyed their stocks, etc.

Is there anyone who today seriously believes the statements of the Ukrainian leadership that foreign weapons will not be used against civilians?

How to explain the attack carried out on April 27 with the help of two Polish-made "Warmate" attack drones equipped with high-explosive ammunition on the peaceful city of Energodar and the nearby Zaporozhye Nuclear Power Plant (NPP)? Both devices were launched from the territory controlled by the Armed Forces of Ukraine and were shot down over the Energodar without reaching their goals.

Committing such provocations using foreign weapons undermines the safety of nuclear facilities and may endanger the life and health of both the Ukrainian population and residents of European countries. After verification and confirmation of the facts, the Russian Federation last week sent to the IAEA Secretariat evidence of an attack on a peaceful critical infrastructure facility with a request to familiarize the Agency's member States with these data.

Representatives of the Kiev regime do not shy away from provocations with chemicals. On May 16, in the area of the settlement of Mazanovka in the temporarily occupied territory of the DPR, Ukrainian special services detonated a land mine reinforced with an overlay of up to one ton of ammonium nitrate. As a result of the explosion, a poisonous cloud with a height of about one kilometer was formed, which shifted towards Kramatorsk.

What kind of international organization has ever made critical remarks on all these facts?