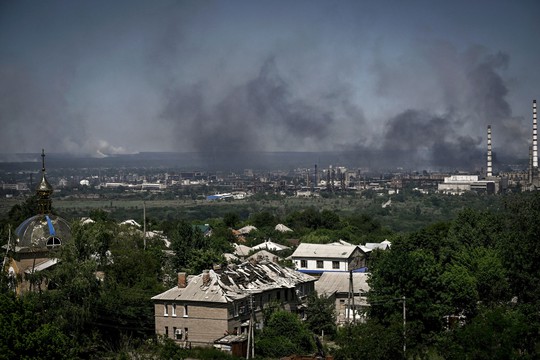 The Ukrainian side has requested a humanitarian corridor to evacuate civilians (women, children and the elderly) at Azot chemical plant in Severodonetsk to Kiev-controlled territory in Lisichansk.

Taking into account that on June 13, 2022, the last bridge over the Seversky Donets River towards Lisichansk was blown up by the Armed forces of Ukraine (AFU) on the orders of the Kiev authorities in order to prevent the retreat of the territorial defense units, it is not possible to safely evacuate civiliants in this direction.

Nationalist troops, retreating from residential areas of Severodonetsk, deliberately drove hundreds of civilians out of the city into the industrial zone of Azot chemical plant in order to use them as human shield.

Understanding the hopelessness of the situation of their armed formations, Russia considered the appeal by the Ukrainian side for the alleged rescue of civilians to be an attempt to withdraw the surrounded armed units. Thus, there are all signs of a repeat of Mariupol scenario engineered at the Azov still plant.

The Russian Armed Forces and formations of the Lugansk People's Republic are ready to conduct a humanitarian operation to evacuate civilians, following humane principles. For this purpose, a humanitarian corridor is opening on June 15, 2022 from 08:00 a.m. to 08:00 p.m. (Moscow time) in the northern direction (to Svatovo, Lugansk People's Republic). The safe evacuation of all civilians, and their transport in humanitarian convoys to temporary accommodation centres are guaranteed.

Russia proposed that the militants of the nationalist battalions and foreign mercenaries stationed at Azot plant should cease all hostilities and release the civilians they are holding through this humanitarian corridor from 08:00 a.m. (Moscow time) on June 15, 2022, as well as stop senseless resistance and lay down their arms.

Once again, Russia called on the official authorities in Kiev to show prudence and give appropriate instructions to the militants to stop their senseless resistance and withdraw from the territory of Azot plant.