Back on Track to Normalcy Instead of Reset. In the Wake of Munich Conference 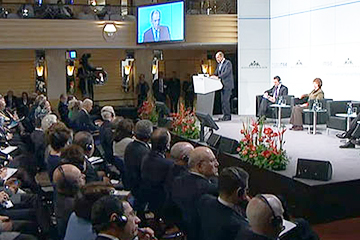 The 49th Munich international security conference had some hidden obstacles. First of all, it took place at the time of utter uncertainty concerning the Syria’s situation. A solution requires close cooperation between the USA and Russia just exactly when the bilateral relations go through hard times.

There were two major issues defining the agenda. First: is it possible to find a solution to the Syrian conflict aggravating the whole situation in the Middle East? Second: is the reset still in force or its initiator Barack Obama decided to alter priorities after being re-elected for the second term?

The answers are still hanging the air. No reset speeches were heard this time. In February 2009 Vice President Joe Biden used the term, but this time he said something else. According to Biden, the USA want to get the relations with Russia «back to normal».

The US Vice President didn’t hide the fact that there were many contradictions between the United States and Russia. The independence of Abkhazia and South Ossetia, the Syria’s crisis, the missile defense and further expansion of NATO and, finally, the human rights and democracy, the issues that have come to the fore recently. The Vice-President emphasized, «These differences are real, but we continue to see opportunities for the United States and Russia to partner in ways that advance our mutual security interest and the interest of the international community».. That’s what defined his meeting with Russian Foreign Minister Sergey Lavrov.

In his turn Lavrov acknowledged there were divergences between Moscow and Washington. He remembered to his interlocutor the US has taken some steps that backlashed in Russia. The Minister expressed hope there would be no reason for such reaction in future meaning the Magnitsky Act repealing the obsolete Jackson-Vanik amendment. At the same time Sergey Lavrov stressed the situation is not as dramatic as some experts see it. Moscow hopes the United States will take no more steps that would affect bilateral relations, he said after a meeting with US Vice President Joe Biden in Munich on February 2. «We have drawn the Vice President’s attention to the fact that there have been steps on their part that have provoked a rather sharp reaction in our public opinion,» Lavrov said. «We hope there will be no more cause for that». He pointed out, «There have always been problems in Russian-US relations and they should be addressed on the basis of equality while «seeking to avoid the creation of any contrived problems». The top Russian diplomat noted. «There is an understanding on both sides, that along with differences that need to be addressed to find mutually acceptable solutions, we have very many common interests in the field of non-proliferation of weapons of mass destruction, fight against terrorism, drug trafficking, organized crime».

Talking about divergence and matching interest one should note the Syrian opposition representatives were the most noisy and active participants in the 49th conference. Syrian National Coalition leader Moaz al-Khatib made a sensational statement. He announced he was ready for dialogue with officials of President Bashar al-Assad's regime. He said the reason was a desire to stop bloodshed and save thousands of civilian lives.

No details of the meeting have been made public as yet. Still the very fact al-Khatib deemed it necessary to meet Sergey Lavrov is a sign the Syrian opposition, or, at least, a part of it, may be trying to take a more flexible stance. The opposition leaders had flatly refused to have any contacts with President Bashar Assad before.

The reason for such new turns may be the new assignments for US top foreign policy positions. Hillary Clinton has left the job recently. She was one of the most ardent supporters of Syria’s armed opposition. According to the New York Times, she and former CIA director David Petraeus approached President Obama with a proposal to start arms deliveries to the Syrian rebels. (1) Obama said no. He found the plan too risky because the weapons could get into unfriendly «third hands». It may not be excluded that with Clinton gone the Syrian opposition clout would dwindle.

Syria is just another part of the geopolitical problem related to the correlation of forces in the Middle East. No matter Biden spoke about mutual adherence of the both countries to the goal of maintaining stability, it’s hard to expect concessions to Russia or taking its interests into account. As US scholar Noam Chomsky says, «The United States is in favor of stability. But you have to remember what stability means. Stability means conformity to U.S. orders. So, for example, one of the charges against Iran, the big foreign policy threat, is that it is destabilizing Iraq and Afghanistan. How? By trying to expand its influence into neighboring countries. On the other hand, we «stabilize» countries when we invade them and destroy them». (2)

The New York Times has adduced the opinions of two US politicians who are dry behind the ears on the issues related to the US-Russia relations. Both actually called on the White House to take a more constructive stance on Russia. James F. Collins, who was ambassador to Russia from 1997 to 2001 under President Bill Clinton, is sure the both countries can improve the relations. «We can manage these issues effectively together, or end up shouting at each other,» he said. Collins added, «Anybody who suggests we are going to disengage and let them stew just doesn’t get it. We will have to deal with them». Matthew Bryza, a former deputy Assistant Secretary of State for Eurasian affairs, said it would be best to deal dispassionately with Moscow. «Every American president in my career has come into office thinking that they are going to be the great communicator that makes a breakthrough with Russia,» Mr. Bryza said. «As their terms have continued, every president has been disappointed». He added: «Russia behaves like Russia. Russia pursues its own hard-core national interests. That is realpolitik. We should de-sentimentalize our relations». (3)

Until now Washington is not ready to listen to the opinion of US experts on Russia. One should not believe the Biden’s promises to put the relationship back on track to normalcy. The track may lead one to a wrong direction, especially if laid by someone else. It’s noteworthy some Republican Senators raise concern about the prospects of the would-be visit to Moscow by Thomas Donilon, the National Security Advisor. According to the Washington Post, he is going to discuss arms control issues. The Senators are worried the United States will have to make concessions, including missile defense. A practice of mutual concessions is not a part of US diplomacy’s traditions. It’s something else they are accustomed to…